Louis M. Gottschalk, [2] the eminent American pianist, was born in New Orleans. His father, being a wealthy man, gave his son the best advantages for a musical education obtainable in that city, although he did not intend him for a professional musical life. When twelve years old Gottschalk appeared in a concert, winning so much well-merited success that hs father concluded to send him to Paris for further study. Here he remained several years, gaining much popularity as a pianist and composer. “His father losing his fortune, Gottschalk decided to become a concert pianist. He first concertized in France, Spain and Portugal, meeting with brilliant success in each of these countries, playing his own compositions, founded mostly on Creole melodies, of a popular, fascinating character. His music is original, attractive and brilliant, appealing alike to the cultured and uncultured musical people. He made his American debut in Boston, where the critics pounced on him most unmercifully, not for lack of technical ability, for in that he was wonderfully perfect, but for what they termed the light, trashy music he played. Gottschalk felt very sore over this stricture and never again appeared in a public concert in Boston. He made his home in New York, where he was much courted and popular. He was engaged for several years by Strakosch, giving concerts in the middle, southern and western States and Canada. In his American concerts Gottschalk always had two or three vocal artists to assist him, never giving distinctive piano recitals. Adeline and Carlotta Patti commenced their careers with him; Brignoli, the great tenor, and Clara Louise Kellogg, were at a later date in his troupe. He toured the United States many times, finally going to Mexico and South America where he lost his life. He was undoubtedly the best American pianist, and is so considered, although he did not play classical works in public. He had velocity and force, and could play a fine, delicate passage with exquisite softness and beauty. In the concert-room he was a thome, supreme and self-possessed. He loved to give suppers to his friends, and tell them of his adventures and experiences in his concert travels. His best compositions are: Last Hope; March of the Night; Le Bananier; Nocturne; Il Trovatore; La Tremolo and Banjo.

Many musical persons think and say that Rubinstein was the greatest pianist of the world. [3] While he was truly wonderful in some respects, we would not award him the highest position. He was a Russian Jew, born to music. At an early age he began giving concerts, although they did not prove successful, undoubtedly for the reason that he was not fully prepared. When he was about fourteen, his teacher took him to London, but he did not meet with the favor that was expected, and he returned to Moscow, his home, to resume his studies. He was an ambitious, faithful student, and pursued the study of Czerny’s, Clementi’s, Bach’s and other standard works, until he was complete master of them. He made a thorough study of the old, as well as the new classical masters, embodying their chief pieces into seven historical concert programs, which he practiced ten hours a day for several years. When the music of these programs had been well memorized, he started out for the second time to astonish the world, and being technically perfect, succeeded in his desires far beyond his most sanguine expectations. For thirty years he concertized, visiting every civilized country—amazing the people with his marvelous playing. After visiting America, where he made quite a little fortune, he turned his attention to composing, abandoning the concert field entirely. It is a fact, that nearly all the great pianists discontinue their concert work, when or before they reach fifty years of age, and turn their attention to composing. To be successful before the public requires from fie to seven hours of hard, daily practice. There are few men who can stand this exacting, wearing life, and are obliged to withdraw from the public early. Rubinstein possessed great strength , wonderful technical facility, power of endurance, and yet he could play with the most exquisite, delicate touch possible. He was not so perfect in his playing as some of the other pianists, often making quite serious blunders, but his genius and self-possession enabled him to cover up all mistakes so quickly, the public did not discover them. He was, and will continue to be known as, a most wonderful pianist, but his compositions, of which there are many, will, with but three or four exceptions, soon be lost and forgotten. 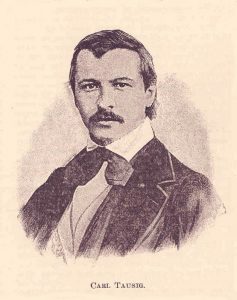 One of the prominent central figures in the pianistic art, after Von Bülow and Rubinstein, is Carl Tausig. [4] When only a boy of fourteen his father took him to Liszt, who pronounced his talent wonderful. He remained with Liszt about five years, and then commenced his concert work. At first he was not successful, and was not received with favor, the critics saying he made more noise than music. The Berlin press was especially severe, saying his hammering style of playing nearly drove them mad. They advised him to soften and tone down his sledge hammer way of pounding the piano if he desired to captivate an audience. This sever stricture caused Tausig to leave Berlin in anger, and he went to Vienna to make that city his home. He lived there three years without being much heard from, but presumably he devoted his time to practice in endeavoring to improve his style, for at the end of three years he returned to Berlin, where he was received with the greatest favor. He established a school in Berlin, which became widely known for its advanced technic.

Another of Liszt’s most gifted pupils was Franz Bendel, born at Prague, Bohemia. [5] He placed himself under Liszt at twenty-two, after having studied several years with the best masters of Prague. Bendel was with Liszt five years, during which time he practiced nine hours a day. He practiced the compositions of Beethoven two years before going to Weimar. With Liszt, he studied Chopin’s compositions two years, Schumann’s compositions one year, Liszt’s music he studied two years; Mozart and Von Weber he studied in Prague. In 1862, when Liszt went to live in Rome, Bendel moved to Berlin, where he continued his practice of the most noted compositions of the old and new composers. In Berlin he was considered the most famous of all the German pianists. His technic was wonderful, and he played everything that was worth playing. He was much sought after by the great orchestras of Germany, because of his knowledge and facility in playing all the noted concertos of the best masters. I was a pupil of Bendel for a year at Weimar, and, besides this, was an associate with him in Liszt’s class. He was one of the most genial men and the best pianist I ever met. He was the pianist at Gilmore’s great “Peace Jubilee” in Boston in 1872. He was under an engagement with the Steinways for a series of eighty concerts in 1874, but typhoid fever caused his death after four days’ illness, in July, 1873. He was a fine, I may say a distinguished looking man, and, had he lived to fill his contract with the Steinways, would have become as popular with the American people as Paderewski has since. Bendel was talented as a composer, as well as pianist, and many of his piano compositions are extremely beautiful and popular. He left more than four hundred compositions, a majority of which are for the piano.

Moritz Rosenthal is regarded by European critics and musicians as the most wonderful technical pianist of the world today. [6] Indeed, no pianist, past or present, has ever surpassed him in this respect. He is a veritable athlete at the piano, although he seldom pounds in a way to produce unpleasant results. His playing is somewhat mechanical, which must naturally result from constant hard practice to overcome many of the difficult compositions of the modern day writers. Notwithstanding this apparent unmelodiousness, there is a fascination about his playing which strongly appeals to one’s sense of the marvelously perfect artist. I have heard Rosenthal several times, and always enjoy his playing. The fist time was with the Boston Symphony Orchestra, when he played Chopin’s E minor Concerto in the most perfect manner I have ever heard it played, and I have heard it many times. He also played Liszt’s Twelfth Rhapsodie in a most masterful manner.

Eugene d’Albert is acknowledged one of the present great pianists of the day. [7] He is Scotch born, but claims to be a German. His education was mostly obtained in London, although for a brief period he was under Liszt at Weimar, but not long enough to be considered a distinctive Liszt pupil. His technic is ample for all demands, and his physical endurance is equal to that of Rosenthal’s. D’Albert is a superior Beethoven interpreter, and, after Von Bülow, may be considered the best representative of that master’s works. His reputation in Europe is of the very highest, both as pianist and composer. He has virtually retired from concert life, devoting most of his time to composing, bidding fair to rival Rubinstein and Liszt. D’Albert followed Von Bülow to this country, giving concerts in all the large eastern cities. He gave five classical recitals in Boston, playing mostly Beethoven’s sonatas. His rendering of the great Waldstein and Appassionata sonata I have never heard surpassed, not even by Von Bülow in his best days. In addition to these recitals, he played twice with the Boston Symphony Orchestra the E-flat Concerto, Beethoven, and A minor Concerto, Schumann, in both of which he won great success. Like nearly all the great pianists, D’Albert wishes to be known as a composer instead of pianist and, from present reports, he really bids fair to accomplish his desires.

Scharwenka, well known in America, Moszkowski, Liebling Godowsky, Busoni, Hofmann, Joseffy, Burmeister, Baermann, Ganz and Sherwood are all more or less distinguished as great pianists here and in Europe. [8] De Pachmann[9] and Paderewski are so well known and have been so often and thoroughly written up that it seems unnecessary to speak of them in this article.

[6]. Allan Evans spells the first name of this pianist as “Moriz” in New Grove Dictionary Online. He was also called Moritz or Maurycy (1862-1946). For a short biographical note see the “Conference Program” in the present Journal. [Back]

[9]. Vladimir De Pachmann (1848-1933) was an Ukrainian pianist of Austrian-Turkish descent. He was recognized as a great Chopin interpreter and earn a certain notoriety for his quirky behavior during concerts (talking to the audience, etc.). See Nigel Nettheim, “De Pachmann’s Piano Fingerings,” Clavier 31, no. 3 (1992): 14-16. [Back]