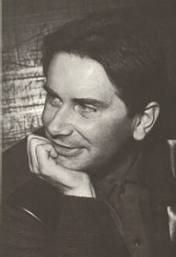 Witold Szalonek was born on 2nd March 1927 in Czechowice-Dziedzice. In 1949-56 he studied at the State Higher School of Music in Katowice, piano with Wanda Chmielowska and composition with Bolesław Woytowicz. Following his first successes at international composers’ competitions, he received a grant from Kranichsteiner Musikinstitut in Darmstadt (1960). In 1962-63 he continued his studies with Nadia Boulanger in Paris. In 1967 he began to teach composition at the Katowice School and in 1970-74 was in charge of the Department of Composition and Theory. In the early 1970s he was invited by the Deutscher Akademischer Austauschdienst to work as ‘artist in residence’ at West Berlin’s Hochschule der Kunste. In 1973 he won the competition to succed Boris Blacher as Professor of Composition there. He has conducted numerous seminars and courses in composition in Poland, Denmark, Germany, Finland and Slovakia. In 1990 he received an honorary doctor’s degree from the Wilhelmian University in Munchen. He also won the annual award of the Polish Composers’ Union (1994).

Szalonek’s diverse output includes choral, solo, chamber and orchestral works. They have been featured in major new music festivals such as the International Summer Courses in Dramstadt, ISCM World Music Days, Warsaw Autumn, Time of Music in Viitasaari, Gulbenkian Music Festival in Lisbon, Inventionen in Berlin, Alternatives in Moscow and Contrasts in Kiev. In 1963 Szlonek discovered and classified the so-called ‘combined sounds’ generated by the woodwind instruments. He is also the author of theoretical studies on a wide range of subjects, including ‘combined sounds’, sonorism, Chopin and Debussy.

Sonata for Cello and Piano – 1958
Quattro monologhi for oboe solo – 1966
Propozinioni for flute, viola and harp – -1967
Mutanza for piano – 1968
Improvisations sonoristiques for clarinet, trombone, cello and piano – 1968
5 Little Pieces for flute and other instrument – 1969
Aarhus Music for wind quintet – 1970
Propozioni II for flute, violoncello and harp – 1970
Three Sketches for harp – 1972
Connections for 10 instruments – 1972
Propozioni III for violino, violoncello and pianoforte – 1977
Piernikiana for tuba – 1977
Take the Game… for 6 percussionist – 1981
Five Ghoulish Dreams for alto saxophone – 1985
Inside?-Outside? for bass clarinet and string quartet – 1987
Toccata e corale for organo – 1988
Toccata e corale version for piano – 1990
Elegia on the Death of Friend for clarinet and piano – 1989
Invocazioni for due chitarre – 1992
Medusa Dreams of Pegasus for horn and recorder – 1997
Sept epigrammes modernes according to G.Hoffnung for saxophone quartet – 1993