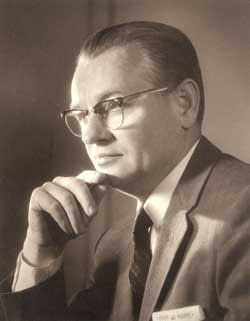 With great sadness we note the recent passing of Dr. Stefan P. Wilk, a prominent member of Polish community in Los Angeles, a distinguished physician, humanitarian, and philanthropist. He died on 25 March 2008 in Los Angeles after a long illness.

Stefan Wilk was born in 1917 near the city of Lwów in southeastern Poland. Orphaned early in life, he was raised in several foster homes and, between the years 1931-1935 he studied at the Niepokalanów Seminary, an institution founded by the legendary Father Maximilian Kolbe, who was later canonized by Pope John Paul II. Dr. Wilk eventually returned to the city of Lwów, where he worked as private tutor and self-financed his studies. He obtained his high school diploma and enrolled in the Lwów Polytechnical Institute, concentrating in mathematics and engineering, but his education was interrupted by the outbreak of World War II.

In the early months of the war, Stefan Wilk escaped from occupied Poland to Yugoslavia and with other Polish refugees, made his way to France, where he joined a Polish Army battalion attached to the French Army. Fluent in French, German and Russian, he also served as a military interpreter. When the French capitulated to Hitler’s June 1940 invasion, Stefan Wilk’s unit retreated to neutral Switzerland, where he was interned for the duration of the war.

Along with his fellow soldiers, Stefan Wilk was able to study medicine first at the internment camp in Winterthur and later at the School of Medicine at the University of Zurich, graduating with a medical degree on January 29, 1949. Afterwards, he enrolled in an advanced degree program in the field of biochemistry, eventually receiving his diploma and further specializing in radiology at the University of Bern.

Dr. Wilk arrived in the United States in 1952. He settled in Los Angeles, where he obtained a medical license and a Radiology Board Certification. He joined the UCLA School of Medicine in 1954 as an Assistant Professor. Then, in 1959 he became Director of Radiology Department at the Queen of Angels Hospital, one of the most important teaching hospitals in the region, where he also started a school of x-ray technology, the first of its kind in Los Angeles.

Dr. Wilk’s wide-ranging education and expertise led him to initiate many programs in the various hospitals and learning institutions that he had graced with his knowledgeable presence. Author of a pioneering work in tomography and image diagnostics, Dr. Wilk also translated several key books on radiology from German into English, including The Human Spine in Health and Disease (1959) and Borderlands of the Normal and Early Pathologic in Skeletal Roentgenology (Third American Edition, 1968), the latter considered a key text in the field of radiology for several decades. Author of numerous scientific papers and articles, Dr. Wilk was widely recognized as a leading specialist in the field of radiology throughout the United States and some of his early research on tomography helped lay the groundwork for the development of CAT scan technology. During the 1970s Dr. Wilk obtained his amateur radio license and conducted some of the first transmittals of x-rays via television. Dr. Wilk was the recipient of many awards, including the 1962 Special Award from the Radiological Society of North America, the 1978 Doctor of the Year Award from the Queen of Angels Hospital, the 1983 Distinguished Service Award from Santa Marta Hospital, and the 1986 Regina Angelorum Award.

Dr. Wilk’s other important contribution in the field of medicine is Children’s Medical Care Foundation, which he endowed and chaired for many years since its inception in 1981. The Foundation is based on providing the most promising young Polish pediatric physicians with funds for a specific period of practical training at the world’s leading medical schools. Over the past two decades, the Foundation’s scholars received training at such prestigious medical schools in the United States as the University of Southern California, Harvard Medical School, and Columbia School of Medicine, as well as universities and medical schools in Paris, Frankfurt and Zurich. Dr. Wilk’s Children’s Medical Care Foundation also helps sustain pediatric hospitals in Poland and the Ukraine. Dr. Wilk’s exemplary charitable efforts on behalf of children’s health have been recognized by the Polish government in 1990 with a Cross of Polonia Restituta, one of the highest honors that can be bestowed by Polish government on a civilian, soldier, or a foreigner.

In 1952, Dr. Stefan Wilk married Wanda Harasimowicz, a Detroit native who moved with her parents to California in 1949. During their many years together, the Wilks’ love of Polish music led them to establish and endow numerous organizations that promoted Polish culture. Together with his wife, Dr. Wilk was the founder of the Polish Music Reference Center (now called the Polish Music Center) at the University of Southern California in 1985. The Wilk endowment provides for the operation of the Center’s staff and their generous support over the past twenty years has led to countless concerts, book publishing, creation of the PMC website, and establishing of a unique library of manuscripts, scores and books relating to Polish musical culture. Ars Musica Poloniae, another charitable foundation established in 1992 by the Wilks, facilitates a variety of projects in Polish music from publishing and recording to scholarships for Polish students in Los Angeles.

Due to his unprecedented philanthropy and promotion of Polish music, Dr. Wilk received the Directors’ Award from the USC School of Music in 1983. Together with his wife, he also received the Gold Medal from the Polish Composers’ Union in 1988 and the Polonia Award from the Polish American Congress in 1989. Dr. Wilk also received an Honorary Doctorate from the University of Warsaw in 1990 for his outstanding scientific, educational, and humanitarian achievements.

Throughout his long and productive life, Dr. Wilk’s guiding principle was to help others, just as he was helped by numerous individuals and institutions during his early years in Poland and Switzerland. A brilliant intellectual, scientist, medical pioneer, and ambassador for Polish culture in the United States, he was instrumental in transforming and enriching the lives of many people, earning the respect and gratitude of society for his far-reaching generosity and good will.

Dr. Stefan P. Wilk is survived by his wife, Wanda, daughter Diane Wilk Burch and her spouse, Michael Burch, grandchildren, James, Katherine, and Richard Burch, as well as Dr. Kenneth A. Harris—a nephew whom Dr. Wilk helped to raise—his wife Terri, and children, Michael, Bryan and Kimberly. Visiting hours are on Friday, April 4, 2008 from 9 a.m. to 9 p.m. at the Forest Lawn, Hollywood Hills. Funeral services for Dr. Wilk will be held on Saturday, April 5, 2008 at 1 p.m., at Our Lady of the Bright Mount Church, 3424 West Adams Boulevard, Los Angeles. Burial will be at Forest Lawn Hollywood Hills immediately following the service.