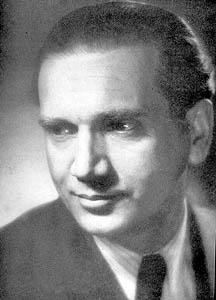 Artur Malawski, a prominent composer and conductor, graduated from the Kraków Conservatory of Music (studies under J. Chmielewski) with distinction as a violin virtuoso in 1928, and from the Warsaw Conservatory of Music with diplomas in composition (class of Kazimierz Sikorski) and conducting (class of Walerian Bierdiajew) in 1939. Malawski lectured on composition, conducting and theory at the State Higher School of Music in Kraków from 1945 until his death, where his pupils included Penderecki and Schaeffer. He also taught conducting at the State Higher School in Katowice (1950-1954). In addition, Malawski appeared as a conductor of symphony orchestras in concert halls and on the radio. During the years 1948-1951 he was President of the Polish Section of the ISCM. His conducting activities wererestricted largely to his own works as he devoted most of his time and energy to composition.

Malawski received numerous awards for his compositions, among them the 1946 Award of the Kraków Voivodeship; the Second Prize at the Chopin Competition for Composers in Warsaw for his Symphonic Variations (1949) and the Third Prize at the same competition for Toccata and Fugue in the Form of Variations; the 1952 State Award of the Third Degree for The Peaks; the 1955 State Award of the Second Degree for teaching and composition activities; the 1955 Festival of Polish Contemporary Music Prize and the Award of the Minister of Culture and Art for Symphonic Studies and for Trio for Piano, Violin and Violoncello; the 1956 Lifetime Achievement Award of the Polish Composers’ Union; the 1956 Order of the Banner of Labor of the Second Degree; and the 1957 Music Award of the City of Kraków for his creative work, especially for his Symphony No. 2.

My interest in music manifested itself quite early, when I was just four years old. As a six year old, I began to improvise on violin and piano.. In my seventh year I began to study violin. My interest in music was probably helped by the fact that my parents were musical and lots of piano, flute, guitar, violin and zither music was made at home. My mother taught piano and I listened to her lessons as a child. […]

A clear turn in my understanding of music came in my 16th year, when I moved to Kraków and began to study music seriously, selecting violin as my specialty. At that time I played a lot of chamber music and it made a huge impression on me that lasted throughout my lifetime. […]

He was the most independent and uncompromising among all of the Polish composers active in the first post-World War II decade. He forged his own path, creating his own thoroughly modern artistic language, as well as his own technique and aesthetics with universal values. Even when reaching for the folk idiom, he transformed it using his own, specific techniques and decorated it with his own sound, never resorting to quoting anyone. His music is often radical and edgy, often filled with deep emotion, but always displaying his unique language that allows us to say: “Without doubt, it was written by Malawski.”