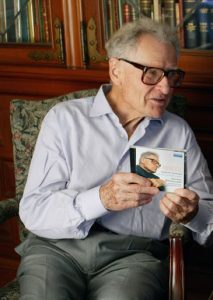 Stanisław Skrowaczewski commands a rare position in the international musical scene, being both a major conducting figure and a highly-regarded composer. Born in Lwów, Poland, Skrowaczewski began piano and violin studies at the age of four, composed his first symphonic work at seven, gave his first public piano recital at 11, and two years later played and conducted Beethoven’s Third Piano Concerto. A hand injury during the war terminated his keyboard career, after which he concentrated on composing and conducting. In 1946 he became conductor of the Wrocław (Breslau) Philharmonic, and he later served as Music Director of the Katowice Philharmonic (1949-54), Kraków Philharmonic (1954-56) and Warsaw National Orchestra (1956-59).

Skrowaczewski spent the immediate post-war years in Paris, studying with Nadia Boulanger and co-founding the avant-garde group Le Zodiaque. After winning the 1956 International Competition for Conductors in Rome, he was invited by George Szell to make his American debut, conducting the Cleveland Orchestra in 1958. This led to engagements with the New York Philharmonic, Pittsburgh and Cincinnati Symphonies and, in 1960, to his appointment as Music Director of the Minneapolis Symphony Orchestra (now the Minnesota Orchestra). Skrowaczewski has regularly conducted the major orchestras of the world, as well as the Vienna State Opera and the Metropolitan Opera. He has made international tours with the Concertgebouw, French National, Warsaw and Hamburg orchestras, and twice toured the Philadelphia Orchestra to South America and the Cleveland Orchestra to Australia.

From 1984 to 1991, following 19 years as Music Director of the Minneapolis Orchestra, Skrowaczewski was appointed Principal Conductor of the Hallé Orchestra. With the Hallé he gave concerts across England, led tours throughout Europe and the United States, and recorded for RCA, Chandos and Pickwick/Carlton. In 2007 Skrowaczewski was appointed Principal Conductor of the Yomiuri Nippon Symphony Orchestra for three highly successful seasons, during which time many of his performances were recorded live for Columbia Records.

An active composer, Skrowaczewski’s most recent work, Music for Winds (2009), has already been performed by the Bavarian Radio Symphony, German Radio Philharmonic, Yomiuri Nippon Symphony and Minnesota orchestras. His Symphony was premiered in 2003 by the Minnesota Orchestra; his Concerto for Orchestra was shortlisted for a Pulitzer Prize in 1999, and his Violin Concerto was commissioned and premiered by the Philadelphia Orchestra. Earlier works performed by major European and American orchestras include the Concerto for Clarinet, Overture 1947, which won the Szymanowski Competition in Poland, Concerto for English Horn and Ricercari Notturni, recipient of a Kennedy Center Friedheim Award in 1976.

Skrowaczewski’s interpretations of the Bruckner symphonies have earned him the Bruckner Society of America’s Kilenyi Medal of Honor and the Gold Medal of the Mahler-Bruckner Society, whilst his programming of contemporary music at the Minnesota Orchestra has been acknowledged with five ASCAP awards. An extensive discography includes recordings for many of the major labels and many celebrated earlier recordings have been re-released on CD. Skrowaczewski’s recordings of Bruckner’s 11 symphonies and Beethoven’s nine symphonies with the Saarländischer Rundfunk orchestra for Arte Nova received enormous critical acclaim, with the Bruckner winning the 2002 Cannes Classical Award in the ‘Orchestral 18/19 Century’ category. Other more recent releases include Shostakovich’s First and Sixth Symphonies with the Hallé Orchestra on their own label and Shostakovich’s Tenth Symphony with the Deutsches Symphonie Orchester Berlin, recorded live in concert in 2003.

Guest engagements continue to take Skrowaczewski across North America, Europe and Japan. In the 2011 Skrowaczewski made a long-awaited return to the Berlin Philharmonic, conducting three memorable performances of Bruckner’s Third Symphony. Highlights of his 2011/12 season include returns to the Bavarian Radio Symphony and Tonhalle Zurich in Europe; Saint Louis Symphony, Nashville Symphony, and Minnesota orchestras in the USA; and three visits to Japan, where he conducted both Yomiuri Nippon and NHK symphony orchestras in Tokyo, and the Deutsche Radio Philharmonie on tour across the country.

Biography for the 2011/2012 season, courtesy of Intermusica Artists’ Management. 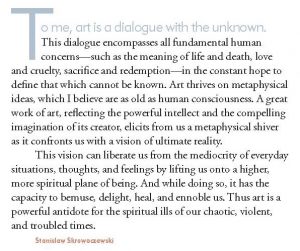 Violin Concerto op. 18 (1940). Manuscript score in black ink with annotations in red, 7 pages on unidentified music paper. The first seven pages of the work; the remainder was destroyed during the war.

Uwertura [Overture] for orchestra (1954). Manuscript score in ink, with a title page and the list of instruments; 33 pages, on PWM music paper – bifolios bound with a string through the middle.

Prelude-Fugue-Postlude for Orchestra (1940s). Manuscript score in black ink with some corrections and additions entered in pen, ballpoint and pencil on unidentified 20-stave paper. 54 pages, numbered in ink; paper size 10 x 13.75 in.