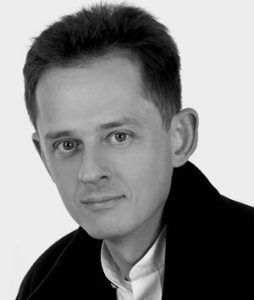 Jarosław Kapuściński is an intermedia composer and pianist whose work has been presented at New York’s MOMA, Zentrum für Kunst und Medientechnologie in Karlsruhe, Museum of Modern Art Palais de Tokyo and Centre Pompidou in Paris, National Reina Sofia Museum in Madrid and many other venues. He has received numerous awards at festivals, including the UNESCO Film sur l’Art Festival in Paris in 1992, VideoArt Festival in Locarno in 1992 and 1993, Manifestation Internationale Vidéo et Art Éléctronique in Montréal in 1993 and International Festival of New Cinema and New Media in Montréal in 2000, among others.

Kapuściński’s primary interest is creation and performance of works in which musical instruments are used to control multimedia content. He was first trained as a classical pianist and composer at the Chopin Academy of Music in Warsaw and expanded into multimedia field at a residency at Banff Centre for the Arts in Canada (1988) and during doctoral studies at the University of California, San Diego (1992-1997).

Kapuściński is actively involved in intermedia education. Currently he is Assistant Professor of composition in the Department of Music at Stanford University, and directs the Intermedia Performance Lab at Stanford’s Center for Computer Research in Music and Acoustics (CCRMA). He has also taught at McGill University in Montreal, Royal Academy of Arts and Music in the Hague, Art Conservatory and Music Academy in Odense, Conservatory of Music at University of the Pacific and lectured internationally. He has authored an article, “Composing with Sounds and Images,” an extract from his Ph.D. thesis at the Music Department of the University of California, San Diego. It was published in “Monochord. De musica acta, studia et commentarii”, Vol. XIX, ss. 43-50. His other writings on music include Japanese Traditional Orchestral Music: The Correlation between Time and Timbre, Interfacing Graphic and Musical Elements in Counterlines, Counterlines: Studies in Interfacing Graphic and Melodic Lines, Composing with Sounds and Images, and Orchestraton in Gagaku Music, among others.

Jatayu for piano and tape was composed at the Polish Radio’s Experimental Studio in Warsaw. My source of inspiration was the music of Indonesian gamelan orchestra. I’ve encountered it for the first time as a child, when my parents were posted to a diplomatic mission in Indonesia. What I had once absorbed unconsciously as I watched the performances of Ramayana, proved very important later. The passionate emotionalism of this music that comes about solely through the changes of tempo and dynamics is fascinating in its harmonious simplicity.

Catch the Tiger (2001)
Interactive performance for piano and computer projection

Where is Chopin? (2010)
Performance/installation created for the bicentennial of Chopin‘s birth, with video and recomposed music based on Chopin’s Preludes Op. 28. The composer’s goal was to explore the impact of Chopin’s music on the minds and faces of listeners from around the world. Where is Chopin? Resulted from the composer’s internationally research that included interviewing and videotaping the participants. Where is Chopin? has been presented around the world. The presentation utilizes three-screen video projection, stereo sound, and Disklavier piano and the composer toured the world with performances of this piece.

Juicy (2010)
A work for piano and computer-controlled image and sound that was produced using stop motion animation of fruit. It has been performed internationally by the composer at such venues as Jenny Q. Chai at Spectrum in New York, CNMAT in Berkeley, the Festival Leo Brouwer de Música de Cámara in Havana, Cuba, at the China Shanghai International Arts Festival, Tokyo Experimental Festival, the Re-New Digital Arts Festival in Copenhagen, the Sonic Arts Research Centre (SARC) in Belfast, Run Run Shaw Creative Media Centre at City University of Hong Kong and EMPAC at the Rensselaer Polytechnic Institute. Juicy has been released on a DVD along with Mondrian Variations, Catch the Tiger, Koan, and Oli’s Dream.