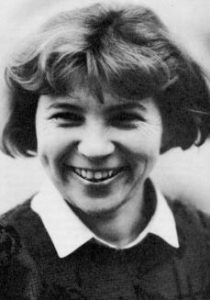 Marta Ptaszyńska is one of the best known Polish woman composers. Born in Warsaw, Poland, and living in the United States since 1972, she has been musically active in both the U.S. and Europe. Also widely recognized as a virtuoso percussionist specializing in performances of contemporary music, she has appeared on many new music festivals, and premiered numerous percussion works.
In her native Poland Ptaszyńska studied composition with Tadeusz Paciorkiewicz and percussion with Mikołaj Stasiniewicz and Jerzy Zgodziński. In 1968 she earned three Master of Arts degrees with distinction in composition, music theory and percussion at the Academy of Music in Warsaw and Poznań. In the early seventies she continued her composition studies with Nadia Boulanger and electronic music at the ORTF Center in Paris, and then percussion at the Cleveland Institute of Music in the U.S., where she received an Artist Diploma Degree in 1974. At the Institute she worked with Cloyd Duff, Richard Weiner and Donald Erb.

Since 1970 she has been teaching composition and percussion first at the State College in Warsaw and then successively at Bennington College in Vermont, the University of California in Berkeley and Santa Barbara, and Indiana University. For many years Ptaszyńska has been in demand as visiting lecturer and clinician, and has given master classes, lectures and concerts at many colleges, universities, and music schools in the U.S.

She often serves as a judge at international and national competitions for composers and percussionists, and has also participated in many workshops.

Ptaszyńska has received numerous awards, grants and commissions over the years, including a second prize at the International Rostrum of Composers at UNESCO in Paris in 1968 for Winter’s Tale for string orchestra, the Polish Radio and Television Composers Award for a TV opera Oscar of Alva to the Lord Byron poem. In 1988 she was honored with a medal from the Union of Polish Composers. Her works for percussion instruments have won critical acclaim around the world and have received prizes from the Percussive Arts society in the U.S. for Siderals in 1974, for Classical Variations in 1976, and for Concerto for Marimba and Orchestra in 1987.

Her music has been performed in many countries and has been presented at prestigious international festivals of contemporary music including the ISCM World Music Days, Warsaw Autumn, Schleswig-Holstein Music Festival in Germany, Aspen Festival, Gulbenkian Foundation New Music Festival in Mexico City, International Cantata Oratorio Festival in Wrocław, Poland and the Percussive Arts Society International Conventions in the U.S. Many of her works have been premiered by such artists as Lord Yehudi Menuhin, Mathias Bamert, Jerzy Maksymiuk, Keiko Abe, Bertram Turetzky, Nancy Allen, Roman Jabłonski, Ewa Podleś, and by such renowned ensembles and orchestras as the Cleveland Orchestra, the Polish Chamber Orchestra, Sinfonia Varsovia, Warsaw Percussion Group, and Les Percussions de Strasbourg.

In 1991 Ptaszyńska became co-founder and vice president of the American Society for Polish Music, a non-profit organization for promotion of Polish music in the U.S. She is music advisor to the Lira Singers in Chicago and served as a member of the board of directors of the Percussive Arts Society in the U.S.

A Tale of Nightingales (1968); 8′ for baritone and chamber ensamble, to the poetry of K.I. Gałczyński.
Manuscript.

Liquid Light for Mezzosoprano, Piano and Percussion (1994-1995); 18′
To the poetry of Modene Duffy.
Commissioned by and written for Patricia Adkins-Chiti.
Premiered at Warsaw Autumn 1997 and in the unabridged version at the Huddersfield Contemporary Music Festival, Nov. 25, 1997. Patricia Adkins-Chiti, Mezzo soprano, Ian Buckle, piano, Marta Ptaszynska, percussion.

Cantiones Jubilationis for Women’s Choir and Percussion (1995); 12′
To the poetry of Modene Duffy.
Commissioned by the Lira Singers of Chicago.
Premiered: March 19, 1995, Chicago, The Lira Singers,
Lucy Ding, conductor.

Silver Echos of Distant Bells for Mezzosoprano and String Quartet (1995); 28′
To the poetry of Lord Tennyson, Laslie Woolf Hedley, Donald Bogan, Krzysztof Koehler
and Stanislaw Wyspiański; in English.
Commissioned by the Kosciuszko Foundation.
Premiered: Dec. 10, 1995 in New York at the Kościuszko Foundation by
Mary Henderson-Stuckey, mezzosoprano and the Halycon String Quartet.

Tunes from Many Countries of the World (1977)
Children’s songs arrangement for percussion and instruments. (PWM).

Music of Five Steps for two flutes and percussion ensemble (1979); 19′
Commissioned by the International society for Musical Education.
First performance: July 12, 1980 by the pupils of E. Mlynarski
Elementary School of Music in Warsaw, Poland,
during the XIV World Congress of ISME.(AA)

Silver Threads and Other Songs for Children (1986)
for voice, chorus , and percussion in various combinations, to the poetry of Josef Czechowicz, in Polish (PWM)

From Parisian Tapestries, for harp solo. Manuscript score in pencil and ink (1975), 5 pages. This piece was later revised into Arabesque for harp solo.

Un grand sommeil noir, for flute, soprano and harp, to a poem by Paul Verlaine. (1977). Manuscript sketches and the first version in pencil, 4 pages.

“I think that it is very important for composers to express their own ideas and their own personality. Congregating into a single group or adhering to one style is not an authentic way to go about being a composer. Moreover, it is not the novelty that counts. The composer should express his/her own soul and own personality in the music – then the language will always be understandable. Shostakovich wrote his 14th Symphony in 1969; this was exactly the year that Peter Maxwell Davies composed his “Eight Songs for a Mad King.” These are completely different works, in different styles and based on completely opposing aesthetic principles. It does not mean that Shostakovich’s piece is of a lesser value! If we judge this way that it is the novelty that is the main criterion for music, then the music will become rather uninteresting very soon. Shostakovich’s music is fantastic, but it is written in a traditional style. He seems to be saying: “If I sound old-fashioned so be it: it is my style and it can’t be changed. This is my personality.” I agree with that. In the future time will judge the value, it will judge us differently than we see it at the present moment”. [Ptaszyńska in an interview by Dr. Harley, 1999]

“In vocal works the text suggests immediately the outline, the form, and the structure of the music. The text in the music becomes its most important feature. That’s why when I start writing a piece with text I have to analyse the text first, and then figure out when the climax of the poetry occurs, what structural elements are there, how the poetry is built…. I also look for recurring elements in the poem; I locate the boundaries between separate textual units. There are many kinds of elements that need to be taken into consideration. I believe that musical ideas should reflect the poetry”. [Ptaszyńska in an interview by Dr. Harley, 1999]