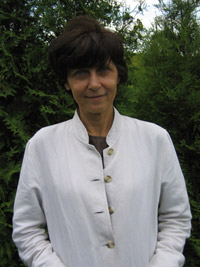 Lidia Zielińska was born in Poznań on 9 October 1953. She graduated in composition studies in 1979 with Andrzej Koszewski at the State Higher School of Music in Poznań. She then worked as a violonist in the Poznań Philharmonic Orchestra and the Agnieszka Duczmal Chamber Orchestra. Zielińska also worked with the Eighth Day Theatre, with creators of visual art, theatre and experimental film (i.e. with Izabella Gustowska, Jan Berdyszak, Aleksandra Korejwo). In 1978-87, she received several dozen prizes in Poland, Yugoslavia, Germany, Switzerland and France (first prizes in Belgrade 1979, Mannheim 1981 and Paris 1983) for her musical and multimedia pieces.

In the 1993/94 season she participated in the EuroMusicTheater project which resulted in a premiere of Zeitschlingen in Stuttgart, in 1994/95 she was a participant in the Donau Ballet project, crowned with a premiere of Venture Unknown at the Holland Dance Festival. In the 1995/96 season she was the composer-in-residence at the EMS (Electronic Music Studio) in Stockholm, and for a piece produced there, Like These White Mice, she was awarded a prize at the International Competition of Electroacoustic Music in Bourges.

From 1982-1992 she served as the artistic director of the “Poznań Music Spring” festival. She is a professor of composition at the Poznań Academy of Music, and she has also taught at the State Higher School of Visual Arts, Wrocław Academy of Music; in addition, she has been a guest lecturer at summer courses in Poland, France, Holland, Germany, Switzerland, Sweden, Belarussia and Moldavia. She has given workshops on sound for children, the handicapped, actors and film-makers. An important area of interest is music ecology and the relationship of composed sound to environmental sounds.

She has held many functions in musical organizations, being at various times a board member of the Polish Society for Contemporary Music, the Poznań branch of the Polish Composers’ Union, the “Warsaw Autumn” repertoire commitee, and the secretary of the Coordination Committee for Creative and Visual Art Circles. In addition, she is president of the “House of World Rhythms” foundation, and co-founder of the “Brevis” music editions and “Monochord” quarterly. She also composed theatre and film music.

Artificial Cult for tape, video tape, neons and visual objects – 1985
Heldenleben. Overheard and Spied on for audio tape, video tape and shadowgraph – 1986
Polish Dances According to Priest Baka for tape – 1986
Feature Piece for saxophone and tape – 1987
Musica humana or How Symphonies Are Born radio piece (Horspiel) – 1989
Graphic 2 for 10 instruments and live electronics – 1991
Fago for bassoon, double-bass, accordion and electronic keybord – 1992
Short piece for flute and computer or computer and tape – 1992
Like These White Mice, radio piece – 1996
Expandata for percussion and tape – 1997

AKO, cartoon (together with Aleksandra Korejwo) – 1986

Whether or not something is pretty is a relative thing, but the definition of beauty has always been somehow connected with strength, with intensity. I think that a musical composition should be convincing and if it has in itself this strength, this power, it will be beautiful. While composing, the hardest effort is not exerted on finding new ideas – ideas are scattered everywhere – but on arranging and structuring these ideas. It takes a lot of work to direct the attention, to “manipulate” the listeners so that they would feel exactly what I had planned “[…]

The composer should foresee the reactions of the listeners and shouldfind appropriate means for the listeners to perceive exactly either the intention of the composer or the ambiguity of this intention. The internal structure of the work, the ways of using, or ordering some modules are perceived by everyone in the same way, independently of their temperaments and circumstances. The rest is an attempt at narrating (for others) the ideal world which the composer has imagined. This world is ideal, i.e., for me, it is the most beautiful and the most perfect. For this reason, I have to strive to achieve the greatest precision in transmitting this world in sound – so that my listeners could also participate in my world. At the same time I should explain that this is not a world that “pours out of my soul” as it were – this would be gratuitous writing. It is an imagined world that emerges from reflection and thought. Whatever else I could say about it, it would sound banal and pretentious. . . [Zielińska, interview with Ewa Gajkowska, 1994]

In the Two Dances for strings the point of departure is the assumption that Saturday is the symbol of the several short hours of weekly culmination of the “profanum” and that Sunday is the symbol of (and has been established for) the “sacrum.” Therefore, the Saturday Dance intends to reflect the content of the secular holiday – its fleeting nature, its feverish character, the glimpses of its various emotions, with a shred of humor, a touch of sensuality, and the seeds of various ideas being thrown around hurriedly and chaotically (for the realization of these ideas one would have to wait till the next Saturday). The dangers of such a brief – and, therefore, violent – release of tension are alleviated by the Sunday Dance which is directed towards other matters. The Sunday Dance restores the internal peace, allowing us to order and generalize the contradictory emotions experienced during the past week and – perhaps – also to ascend above these emotions. [Zielińska, program note for Two Dances ]

I have never had any inclinations to buy a Mercedes or to build a villa, and because of that I still have a feeling that I can do whatever I want. And if I would do it with enthusiasm and professional quality, I would always earn a living. So far this principle has worked in my life pretty well and I do not intend to abandon it. But when studying I did not think whether it would be my profession or not – I only knew that I would certainly continue to write, even if only “to the drawer.” Now I know that until I find out what I have done in composing one piece [during a performance] it does not make sense to attempt another task. Till now, even though I have been around for quite a while already, every premiere is a profound experience for me, I would even say that it is a painful experience. Despite the enjoyment of the final result, the success of the work, I am tortured and hurt just by the process of having a thousand thoughts and doubts. [Zielińska, interview with Ewa Gajkowska, 1994]