I was born in Silesia. . . Old, ancient Polish land. But three cultures have always coexisted there: Polish, Czech, German… Why do I like Czech music? Where does my knowledge and liking of German and Austrian music come from? Why do I worship Mozart, Schumann, Schubert, Brahms, Beethoven, Bach? […] Why am I enamored with Szymanowski and Chopin? Why did I grow up with them? Because at the beginning of my musical education, when I had no idea about music … these names were always near me: Beethoven, Chopin, Szymanowski. . . Does one need to consider it in a special way, does one need to think much about this? I do not think so. . . Nobody chooses their time and place of birth.

Henryk Mikołaj Górecki studied composition with Boleslaw Szabelski at the State Higher School of Music (PWSM) in Katowice (1955-1960). After a post-graduate sojourn in Paris, he became a professor of composition at the PWSM in Katowice and, during the years 1975-1979, its Rector. The phenomenal success of his Symphony no. 3 (Gramophone’s bestselling CD in 1993) has astounded many of his contemporaries, especially in Poland, where the work had been known for more than a decade.

Górecki has worked with great determination to develop his own compositional voice by assimilating the techniques of his predecessors (Bartók, Szymanowski) and those active around him (Boulez, Xenakis, Nono), as well as by paring away all elements extraneous to his personal expression. These processes were carried out through the 1950s and 1960s, beginning with the Four Preludes for piano from 1955, his first numbered opus, and reaching full maturity with Old Polish Music from 1969. This is the most radical and dissonant period in his output: in the 1960s, Górecki belonged to the small group of the most avant-garde composers of his time. Together with Penderecki, Serocki, and others he established a pattern for new music: the more dissonance and the harsher the sound, the better. This style of writing, associated with the Polish school of the 1960s is alternatively known as “sound mass composition” or “sonoristic composition.”

In order to reduce music to pure sound, all elements, except tone color, were stripped away in such of Górecki’s works as, for example Genesis (1962-1963) or the aggressive Scontri for large symphony orchestra (1960), a composition filled with clashes of vertical and horizontal sound patterns, often organized serially.

Beginning with Ad Matrem (1971) and continuing through to Symphony No. 3 (1976) and Beatus Vir (1979), Górecki worked to achieve a direct link between the emotional and spiritual content of texts, both sacred and traditional, and his musical architecture. He sought inspiration in early Polish music: a 13th-century conductus and a 16th-century polyphonic song. The focus on vocal music throughout this period led quite naturally to an emphasis on melody, with a resulting simplification of the harmonic and textural elements. This gradual progress away from dissonance towards consonance, away from aggressive, dramatic, intense music, towards a more mellow style can already be seen in Symphony No. 2, Copernican (1972).

The 1980s saw an expansion of Górecki’s compositional resources to encompass radical contrasts in tempo, dynamics, density and harmonic dissonance. These elements cooperated to create a unified, highly concentrated musical expression, manifested in a remarkable series of chamber works, from the trio Lerchenmusik (1984) to Little Requiem for a Polka for an ensemble of fourteen instruments (1993). These compositions resound with echoes of Chopin, Beethoven, and Szymanowski. They also draw inspiration from colors and rhythms of folk music: the strong accents, harsh timbres, and relentless ostinati of mountain dances from the Tatra Mountains and Podhale region, the melancholy clarinet tunes of Silesia, and the impetuousness of the Czech or Silesian polkas.

For many, Górecki’s Symphony No. 3 represent his highest achievement. Still, he has continued to carry forward the musical, emotional and spiritual concerns with that always fascinated him. As he had once said, “music is one of the domains that people really need, and its importance only depends on whether one knows how to receive it.”

Composing is a terribly personal matter: the overcoming of difficulties, gaining knowledge, deciding upon a certain order, a certain method of constructing a new piece. This is important. You have to chose your way, you have to pick a proper path from an infinite number of possibilities. What do I do? In the past I invented and worked out detailed frameworks for my pieces. I had everything prepared and described before the work was composed. This started from the First Symphony; also in Scontri, Monologhi, Elementi I introduced different ways of structuring the pieces. Later I just knew – I had a technique and then other ideas came in … Let me put it this way: you scholars would want to know too much. Of course it is important to know how a piece is constructed and how it was made. But later this mechanism, this architecture ceases to be all important; the composer thinks about the forms that the music should be “poured into.” […] Music begins with sound. It is always based on some musical association, a musical theme or a structure. Now it is fashionable to say that there are no themes, but they continue to exist. At times I even treated a 12-tone series as a theme. When composing I always begin with introducing some order. I have many things prepared much, much earlier than I begin to compose a piece. In this way I have researched and analyzed the possibilities provided by my materials. However, many pieces that I had worked on have never been finished. I only ordered the materials.

I think that music is one of the domains that people really need, and its importance only depends on whether one knows how to receive it. Every person needs to be prepared to know how to “use” music. Not only music; also literature, painting, sculpture, and film [. . .] Tarkowski said that art is prayer. It is something that I also emphasize. But it is difficult to understand: one has to mature to this thought. It seems to many people that prayer means to “recite the Hail Mary” but someone may recite “Hail Mary” as many times as one wants and it will not be prayer. Olivier Messiaen said during a meeting in Katowice that he is a man of prayer. But what does he do? He writes his notes down, he listens to his birds. And this is supposed to be prayer?

III Symfonia “Symfonia pieśni załosnych” [Symphony No. 3 “Symphony of Sorrowful Songs”] for soprano solo and large orchestra Op. 36 (1976); texts include: 15th c. lamentation of the Holy Cross Monastery (I movement); a young prisoner’s inscription on the wall of her cell in Zakopane’s Gestapo prison (II movement); folk song from the Opole region; 54-55′

Kyrie  for choir and chamber orchestra (2005)

Concerto for harpsichord (or piano) and string orchestra Op. 40 (1980)

Kleine Phantasie for violin and piano (1997) 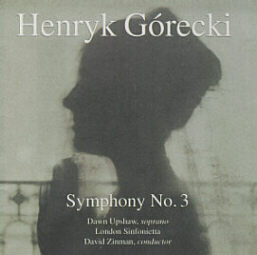 The publisher distributing his music to rest of the world is Boosey & Hawkes, Ltd. (B&H):

In North America Chester Music is represented by: