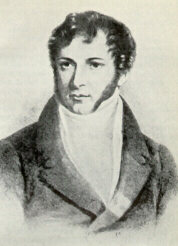 Born on an estate in Guzów near Warsaw, Michał Kleofas Ogiński was a politician and diplomat as well as a composer of early Romantic era music, who studied arts, literature and philosophy in addition to being a violin student of Giovanni Battista Viotti and Pierre Baillot.

An heir to a great Polish tradition of patriotic gentry, Ogiński’s grandfather, Tadeusz, was the governor of the Troki District in the Commonwealth of Poland and Lithuania, and his father, Andrzej, was a cousin of the Lithuanian general and composer, Michał Kazimierz Ogiński (1728-1800). Michał Kleofas studied piano with Józef Kozłowski (1757-1831) the court musician of his family (until 1786) before continuing to study violin with Italian and French virtuosos. Although he did not receive any formal training in composition, Ogiński wrote and published a number of very popular works, mainly for piano, throughout his career.

As a diplomat, Ogiński served as a representative of Poland in the Hague (1789), London (1790), and again in Holland (1791). During the tumultuous time of Polish Partitions, he joined the Targowica group (who took over all of his property), but soon found himself on the side of the Kościuszko Insurrection, as a member of the Council. He created his own division of cavalry and served as its commander during the war. After 1794 he emigrated to Italy, where he continued his political activities and traveled to Constantinople  in 1796 as a representative of the Polish émigré community.

In 1802 he returned to Poland, to his manor in Zalesie near Wilno, where he wrote his memoirs and composed music. In 1811 Ogiński participated in the creation of the Grand Duchy of Lithuania, and became one of the supporters of the Tsar, who nominated him a senator. After the creation of the Congress Kingdom in 1815 Ogiński left for Italy, settling in Florence, where he died. His tombstone may be found in the church of Santa Maria Novella. 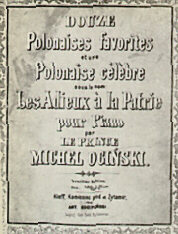 The list of Ogiński’s compositions includes over twenty polonaises for piano solo (and some for piano 3- or 4-hands), that were published in several editions in Lwów, Warsaw, Berlin, Vienna, Dresden, Prague, Paris, and London. The most famous, the Polonaise in A minor, “Pożegnanie Ojczyzny” [Farewell to the Homeland], also known as “Les Adieux” or “Polonaise très favorite,” was published throughout Europe. The location of the manuscript of this work is not known; its first edition appeared in 1831, with a scene from the 1831 November Insurrection against the Russians on the cover. In addition to over 20 editions of the piano version, there are transcriptions for orchestras, chamber ensembles, according, viola, flute solo, flute and piano, guitar solo, 2 violins or mandolins, violin and piano, cello and piano and vocal transcriptions. Choral arrangements of this Polonaise with Polish and Russian texts appeared in the early 1960s.

Ogiński is credited with transforming the formal court dance into a melancholy, salon composition: his polonaises are among the earliest instances of romantic piano miniatures. Often called “character pieces for the piano,” they express a particular mood within a stylized dance form. Besides the polonaises, Ogiński composed a series of romances to French and Polish texts and patriotic songs for the Kościuszko Insurrection. The latter group of pieces did not survive. He is also the author of the 1799 opera to his own libretto: Zelis et Valcour ou Bonaparte au Caire (the manuscript is at the Iagellonian University in Kraków). This opera may have been inspired by contacts with his uncle, Michał Kazimierz Ogiński, a composer – aristocrat who had a private opera company and an orchestra at his service. The Bonaparte opera reveals the younger composer’s interest in literature; his output in this area includes a series of memoirs and diaries, as well as collections of letters, rhymed treatises sent to friends. These writings place Ogiński in the artistic milieu of the late 1700s and early 1800s, among such notable figures in Polish music as Maria Szymanowska (1789-1831) or Karol Kurpiński (1785-1857).

I never claimed to be a composer and didn’t think much of my modest talent; I never felt being able to create something majestic and I never had the time or the drive to succeed because of my musical compositions. […] All I have is a good ear, solid sense of harmony and taste, which I acquired listening and performing good music.”