Kujawiak is a Polish dance from the region of Kujawy after which it is named (the region is in central Poland, on the Mazovian plains). The name itself appeared for the first time in 1827, in a text by T. F. Jaskólski (Pasterze na Bachorzy. Sielanki Kujawskie [Shepherds in Bachorz: Pastorals from Kujawy].

According to Ada Dziewanowska’s description (in Polish Folk Dances and Songs) the kujawiak was originally danced with a calm dignity and simplicity, in a smooth flowing manner “reminiscent of the tall grain stalks in the fields swaying gently in the wind.” The couples were spinning around the circle in a seemingly endless rotation. There were no vigorous stamps and no drastic changes of tempo. This style was passed on from generation to generation. There was no special schooling: children and young people would watch during parties and festive occasions and then try it on the side.

While discussing the dance’s history, Dziewanowska states that because of its beauty the kujawiak was embraced by the landed gentry and the nobility. Fascinated with the music, they collected and published kujawiak melodies. In order to learn the dance, the landowners invited the village musicians and dancers to their manors. They encouraged the peasants to show them fancier steps and figures. They themselves also improvised new figures or new ways of dancing the traditional steps; some of these improvisations were in turn adopted by the village dancers. As a result of this interchange, the kujawiak, in a polished but not completely changed form, was incorporated at elegant parties and fancy balls. 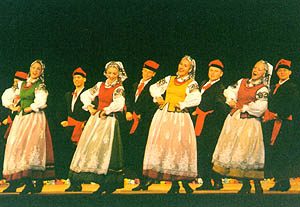 From Kujawy the dance was taken to similar festive occasions in Warsaw and other big cities. From there it spread all over Poland, where it underwent various transformations as, for instance, a tempo alternating from slow to fast and back to slow, show-off steps for men, new figures, etc. One figure from the kujawiak as performed by the Podhale Polish Folk Dance Company appears in the photo; the dancers wear costumes from central Mazowsze area.

According to Roderyk Lange (1966), the kujawiak exists in two forms: as a regional folk dance including many varieties, and as the unified “national dance,” (one of the five so-called “national dances of Poland” with polonaise, krakowiak, oberek,and mazur). Both variants include rotations of couples which shift around a large circle of the dance space. The folk versions are notably faster than the national version, they are also more complicated, with a greater variety and difficulty of steps.

In the Kujawy area, folk dances grouped under the label of the kujawiak have different names, depending on the particular figures used in them: ksebka (na kseb) (to oneself) – with turns to the left; odsibka (from oneself) – with turns to the right; gładki (smooth), owczarek (shepherd), okrągły (round), etc. These dances are at times arranged into dance cycles, starting with a slower one , ending with a fast whirl. In comparison to other dances with the dotted mazurka rhythms (i.e. patterns of a dotted eighth-note, a sixteenth, and two eighth-notes), the kujawiak has a slower tempo; there are many repetitions of the text and the melody. The fact that there is only one strophe of text for this dance (and for the oberek), has led some scholars to believe that it is predominantly an instrumental form (e.g. Aleksander Pawlak, 1980, 20). The singers often repeat “oj, dana, dana” phrases which imitate the sounds of the musical instruments.

Kujawiak is set in moderately fast triple time; Marian Sobieski (1973, p. 389-396) considers it a slightly slower form of the oberek (or, as it is best known in the West, the mazurka which comes from the neighboring region of Mazowsze).

According to the entry in New Grove Dictionary of Music and Musicians, the “kujawiak is characterized by its misplaced accents, usually on the second or sometimes the third beat of the bar, and a tempo of quarter-note = 120-150.” The dance follows a ternary outline with a faster section in the middle; it leads, however, to a final accelerando at the end of the third segment.

In performance practice, kujawiaks are coupled with faster obereks. According to Kolberg, they had initially been arranged in sequences of three dances of increasing velocity. These cyclical arrangements were abandoned when the dance itself grew in size, and began to feature segments in various tempi, including the final accelerando which created room for virtuosic displays.

Traditionally, the kujawiak is danced by couples in a circle, either in a flowing walk, with the dancers turning to one another and then leaning away, or in a revolving pattern (with hands either free or clasped).

Polish folk dance groups in the U.S. often use variants of this dance as a display dance for a solo couple, with elaborate and fanciful figures, e.g. lifting of the female dancer, turns, etc. (e.g. the repertoire of the Podhale Polish Dance Company in Southern California). This practice, in turn, stems from the use of the kujawiak by the State Folk Song and Dance Group Mazowsze. These “pas-de-deux” seem to have more in common with the classical ballet tradition, than with the actual folk practice.

Since the kujawiak is usually included with the dances of central Poland, especially the Mazowsze area, it is usually danced in costumes from that area – variants of strój łowicki from the part of Mazowsze around Łowicz are frequently selected (as by the dance group of the Polish Women’s Alliance, New Jersey, late 1950s – see the photo above). This costume is easily recognizable because of the colorful striped cloth (pasiak) used for men’s pants and women’s skirts and capes.

In 1867 Oskar Kolberg described the folk costume of the men from the Kujawy area as consisting of a long navy coat (sukmana) with a large collar, broad blue pants, boots, wide belt from red cloth, high boots, square hat lined with fur.

The women wore a navy jacket with a small cape around their shoulders, flowery skirt and an apron in a contrasting color, red scarf tied as a tight turban on the head. In Kolberg’s description, the costume was heavy, made of rich wool fabric, and functional, adjusted to the cold climate of the region. Contemporary dance groups add ornaments, use thinner fabric and less layers.

Folk music from the Kujawy area is predominantly in triple meter. The second part of each measure is frequently extended and accented; moreover, the performers often extend (or less frequently, shorten) whole measures of the melody. 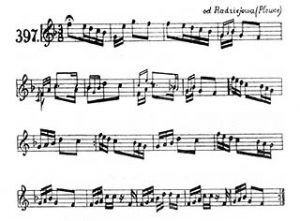 As a result, a folk version of the flexible tempo rubato emerges. In fact, it is this variety of the tempo rubato that has been linked to a similar phenomenon in the piano music of Fryderyk Chopin, especially his Mazurkas (see the work of Marian and Jadwiga Sobieski, “Tempo rubato u Chopina i w polskiej muzyce ludowej,” in Polska muzyka ludowa i jej problemy, Kraków: PWM, 1973, 430-441).

According to the research of Aleksander Pawlak, the kujawiak melodies often feature the “plaintively sounding” minor thirds which create a melancholy, or sorrowful quality in this music (again, Chopin’s Mazurkas come to mind). The second characteristic interval is the major ninth, a sweeping gesture upward presented at the beginning of some kujawiak melodies. It is also important that the melodies do not end at the tonic note, but at the fifth or a different scale degree; thus, the melancholy melody ends “unending” and in suspense…

In past folk-practice, the main melody was usually performed on the violin, accompanied by the basy (low-pitched, bowed string instrument, in two varieties, a larger one and a smaller than the double-bass, modelled on the cello).

The basy served as a percussion instrument – its two strings were usually played in an open position, with a regular, simple pattern. The picture represents a two-stringed basy from the collection of the Ethnographic Museum in Warsaw (photo by M.A. Harley, 1997). The percussive character of the accompaniment was emphasized by the use of a drum.

State Folk Dance Ensembles replace all these arrangements with a symphony orchestra, and many Polish American dance groups rely on these recordings for their performances. Recently, groups like the Krakusy of Los Angeles have made serious efforts to obtain recordings from folk music ensembles playing on authentic instruments in Poland. However, according to Philip Bohlman, efforts to re-create “old country sound” may not be welcome by American audiences at folk music festivals where the larger sound of a “big-band” type seems to predominate (Bohlman 1997, p. 270-71).

In art music, many “mazurkas” may be in fact, kujawiaks. The earliest arrangements of kujawiaks for piano are by M. Miączyński (1830); there were also versions of this dance set for piano in 1845 by the eminent ethnographer, Oskar Kolberg. Needless to say, Kolberg knew the kujawiak very well from the Polish countryside – he wrote down over 1000 melodies and songs from Kujawy in two volumes describing the folklore of this area, included in his monumental Complete Works (orig. published in 1867, reprinted as vols. 3-4, in Dzieła WszystkieWrocław-Poznań: Polskie Towarzystwo Ludoznawcze, 1962). His arrangements are published in vol. 67 of the series.

Feliks Nowowiejski wrote a choral kujawiak; Henryk Wieniawski composed a kujawiak for violin and piano. Examples in art music also include Chopin’s Mazurkas (without the kujawiak in the title): op.6 no.4, op.30 no.4, and op.41 no.1. Moreover, Marian and Jadwiga Sobieski found that Chopin quoted a folk kujawiak in his Fantasia on Polish Themes, op. 13 (it is in the Kolberg collection, as no. 130 in the second volume of the Kujawy set, i.e. fourth volume of Collected Works).