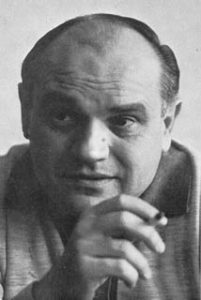 Kazimierz Serocki was born in Toruń on 3 March 1922 and died in 1981. He studied composition with Kazimierz Sikorski and piano with Stanisław Szpinalski at the State Higher School of Music in Łódź and graduated in 1946. He continued his studies in composition with Nadia Boulanger and in piano with Lazare Levy in Paris in 1947-48. From 1946 to 1951 he performed many times as a concert pianist in Poland and abroad. From 1952 onwards he was exclusively committed to composing. Serocki’s output is concentrated in two main spheres : orchestral music and vocal-instrumental pieces to Polish texts selected with fine discrimination.

Serocki is one of the initiators of the festival “Warsaw Autumn”. Together with J.Krenz and T. Bairdem he formed the composers’ group (“Group 49”). He was vice-president of the central administration of the Polish Composers’ Union (1954 – 55). He received a number of Polish and foreign awards, including several State Prizes, among them one in 1952 for his music to the film “Young Chopin”. He also received a prize at the UNESCO competition (1959, for the Sinfonietta) and the award of the Minister of Culture and Fine Arts for the whole of his work (1963).