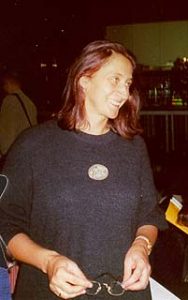 Anna Zawadzka (married name: Zawadzka-Gołosz) was born in Kraków on 1 December 1955. She graduated from the city’s Music Academy, where she studied composition and music theory with Krystyna Moszumańska-Nazar and experimental music with Józef Patkowski. She also collaborated with the Experimental Music Studio of Polish Radio in Warsaw. She continued her studies with Wolfgang Hufschmidt at the Folkwanghochschule fur Music, Theater und Tanz in Essen-Warden. Her output comprises a wide diversity of musical genres, with an emphasis on instrumental chamber music and electro-acoustic works. Her pieces have been performed at numerous festivals in Poland and abroad. She teaches composition and music theory at the Kraków Music Academy and at the Kraków Academy of Theatre.

A full creative condition reveals itself at a level where two states permeate each other – the state of the material and the state of its organization, form, or “mosaic.” One has to discover one’s own material (systems of sound, harmony, rhythm, etc.) and then build from this material the tensions of the form – arranging the material into a certain mosaic. An individual who, while arranging his mosaic, uses only “found” material, belonging to someone else, may be described as re-creating rather than creating something. This is why musical creativity today demands assuming the attitude of a master who researches, discovers, and formulates the laws of his art. [Zawadzka, compositional statement, October 2000]

Witraż II [Stained Glass Window No. 2] for clarinet, cello, accordion and vibraphone was composed at the beginning of 1988. Here, timbral motives play a decisive role; these motives interpenetrate melodic motives and this fluidity results in a peculiar blurring of contours. Thus, textural interplay, melodies of textures, and the polyphony of color create a narration of tensions leading to the final formal gesture. The melodic-timbral motives are developed within the context of closed sections which are interwoven with changeable material of a freer character (one may see here a distant association with the framework of couplet-refrain). The piece is dedicated to Janusz Pater. [Zawadzka, program note for Witraż II, 1988]