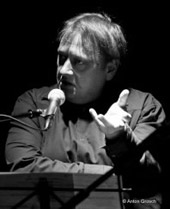 Born in 1964, Siwiński is a graduate of the Warsaw Academy of Music. He studied piano with Kazimierz Gierżod (1983-88) and composition with Włodzimierz Kotoński (1988-94). As a pianist and composer he has attended numerous festivals and workshops of new music in Poland and abroad, e.g. The World Music Days in Warsaw (1992) and Seul (1997), Warsaw Autumn festivals, Poznań Musical Spring festival, Wrocław Musica Polonica Nova festival, International Composers’ Courses in Apeldoorn (Holland, 1995) and Avignon (France, 1992). He has been co-producer and performer of multimedia projects (MMGroup, Michelangelo Pistoletto). He also composes music for theater and film. In addition, Siwiński is a composer of bugle-call for the city of Rzeszów.

The Clouded-Over Eye of the Earthworm for percussion and amplified piccolo flute (1989)
Perceiving music is a Complicated and not Entirely Intelligible Process for tape, piano and violin (1990)
Notari E. M. for tape (1993); Transmission, TV performance (1994)
Notarimbalo for harpsi-chord and tape (1995)
Pianerecerto for piano and chamber orchestra (1995)
Dominotales for piano, percussion, showman and children’s audience (1996)
Schyzia for string quartet (1997, awarded a prize in the 3rd International Competition for Jazz Composition, Słupsk 1997).

Postrzeganie muzyki jest procesem skomplikowanym i nie do końca klarownym [The cognition of music is a process much tangled, yes, and not too crystalline], for tape, piano, and violin (1990). Manuscript score in black ink with marks in white correction fluid, 14 pages.