National Anthem of Poland since 1926 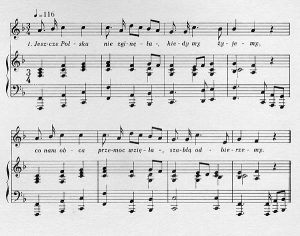 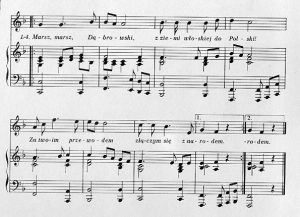 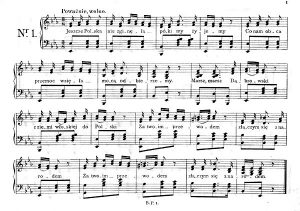 Polish National Anthem (Dąbrowski’s Mazurka) is a lively folk dance with patriotic words written shortly after the country lost its independence in a series of partitions by Austria, Russia, Prussia (1772, 1791, 1795).

It was created between 16 and 19 of July, 1795 in Reggio di Emilia in Italy, on the occasion of the departure of the Polish legions, led by general Jan Henryk Dąbrowski (1755-1818) to fight in the Napoleonic wars (supporting the French dictator).

The author of the “Song of the Polish Legions in Italy” – as the anthem was originally called – was Józef Wybicki, General Dąbrowski’s close associate. The folk tune and the inspiring texts, with the first strophe beginning with “Poland’s not dead as long as we live” immediately captured the attention of the soldiers, Poland’s emigres and the country inhabitants.

After the failure of the final effort to save Poland during the Kościuszko Insurection in 1794, Poles scattered around Europe, with many emigrating to France to join the forces of Napoleon Bonaparte, with the hope that the valiant dictator would reestablish Poland as an independent state.

It is because of this connection that the current national anthem of Poland still contains a reference to Bonaparte and speaks of marching from Italy to Poland, under the leadership of general Jan Dabrowski.

The patriotic song was banned by the Tsarist and Prussian governments in 1815 (after the defeat of Napoleon) and again in 1860. Yet it lived on in numerous variants, sung durimg the uprisings against the Russians (the November 1830, the January 1863), as well as during the 1848 Spring of the Nations.

In the early 19th century the song served as the hymn of the student union (Zwiazek Burszow, 1816-1830). At the time the next read ” March, march, the youth/ go first as it should be/ following your leadership/ we will become a nation again.” Students embraced the song as their anthem again in 1863, when many escaped the conscription to the Russian army by hiding in the Kampinos forest near Warsaw, and by starting the January Uprising (1863 refrain: “March, march to the forest”).

At the end of the 19th century, the song served as the anthem of those proclaiming the need to rebuild the country by hard work, coupled with the fight for its independence (1893 refrain: “March, March, the Poles, to fight and to work”). While the text of the hymn was modified to suit new occasions and socio-political contexts even the name of “Dąbrowski” apearing in the curent title did not survive all the changes.

After the change of government in 1989, the new leaders of the Republic of Poland (since 1989) not only retained Dabrowski’s Mazurka as an anthem , but also sponsored a renewed research and publication effort to promote its image. A 1993 film, produced by Edmund Zbigniew Szaniawski for the Military Company “czolowka” (Avant-Grade), placed a new emphasis on the Mazurka’s appearances in Polish-Soviet war of 1920 and at allied battlefields of World War II. The hymn’s peaceful aspects, if seldom present, here were completely ignored. Moreover, in a direct contradiction of the anthem’s secular chracter, the film located the song in a variety of religious contexts.

Below you will find the full text of the official 4-strophe anthem in English translation. A longer version of the text (in Polish only) appears on our site which contains the reproductions of Juliusz Kossak’s litographs, prepared for an album published for the 100-anniversary of the Piesn Legionow. The album is in the collection of the National Museum in Wroclaw. This version (and the Kossak pictures) are taken from 19th-century postcards in the .

Translation of the Text

Poland is not yet lost
while we live
We will fight (with swords) for all/
That our enemies had taken from us.
Refrain:
March, march Dabrowski
. from Italy to Poland
Under your command
we will reunite with the nation.

We will cross the Vistula and Warta Rivers,/
we will be Poles,/ Bonaparte showed us/ how to win.
Refrain:
March, march…

Like Czarniecki to Poznan, after Swedish annexation,
We will come back across the sea to save our motherland
Refrain:
March, march…

Father, in tears, says to his Basia: “Just listen,
It seems that our people are beating the drums.”
Refrain:
March, march…

The current sound recording is from Marsz, marsz Polonia, CD recorded by the Orchestra of the Polish Army, cond. F. Bieganowski, in an arragement by Rezler. Polskie Nagrania, ECD 064, 1995/6.

The 19th-century postcards of symbolic imagery and Polish emblems are from Maja Trochimczyk Collection.

The 100th anniversary of the creation of the Dąbrowski Mazurka, known as Pieśń Legionów [The Song of the Legion], was celebrated by a publication of a luxury album illustrated with litographs by Polish painter, Juliusz Kossak. A copy of this album is in the collection of the National Museum in Wrocław, Poland. The album was so popular that the illustrations were reprinted on a series of patriotic postcards, issued by the Wydawnictwo Salonu Malarzy Polskich in Kraków, in the early 1900s. The reproductions of these postcards included below are from the .