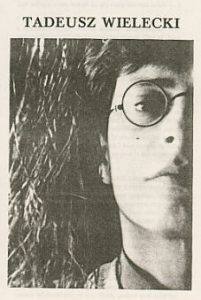 Born in 1954 in Warsaw, Wielecki was trained as a composer and a double-bass player. He studied composition with Włodzimierz Kotoński, Isang Yun and Klaus Huber. He also participated in the New Music Courses in Darmstadt presenting recitals of music for double-bass including his own works and pieces composed by him by other Polish composers. As a double bass player he mainly performs a contemporary solo repertoire (numerous recordings made for radio and TV). He is involved in the activities of the Polish Society for Contemporary Music; in 1992, he served on the program committee of the ISCM World Music Days organized by the PSCM in Poland (with Lidia Zielińska, Zygmunt Krauze). Wielecki initiated and run the plebiscite of “Contemporary Music Hits;” he organized school concerts and radio programs for the youth. In September 1992 he gave concerts at the Soundcelebration 11 festival in Louisville (USA), where he conducted master classes in double bass.

Since 1999, Wielecki has served as the artistic director of the International Festival of Contemporary Music, Warsaw Autumn and through his educational campaign among students has been able to significantly increase attendance while preserving the uncompromising avant-garde programming. His compositions are often located on in the borderland between music and theater; the composer likes to use collage, grotesque, jokes. At times, he juxtaposes elements from modernist and traditional musical languages, placing, for instance, a tonal cadence in the midst of a complex, multilayered texture. His electroacoustic music joins together incongruous elements with a great theatrical effect, achieved through a keen sense of timing. Wielecki’s music expresses the spontaneity, intellectual sophistication, spiritual depth, and brilliant personality of the composer.

Tango, for clarinet, trombone, cello, and piano (19//0). First version of the work. Manuscript score in pencil, 12 pages, music paper of 26 staves. Composed on commission from Krauze’s Warsztat Muzyczny for its special concert of tangos by over 20 composers from different countries.

I feel best when I play my own works. There is then a synthesis of several musical temperaments and personalities that I discover within myself. One of these temperaments, is for instance, the temperament of an actor. I mean that I seek for direct contact with listeners. […] When I play my own work, I become a creative artist in the fullest sense. I can give a more exact, vivid and forceful interpretation of what lays dormant in me. [Tadeusz Wielecki, interview with Marta Ługowska, 1988; trans. Maja Trochimczyk]

I am a very sensual person. Consequently the thing that is very important to me is that music operates by means of sound waves which are dispersed in the air […]. I react to music with my whole being, I feel it through my skin, I don`t like to listen to music on records or over the radio. That music is the kind of life. Only when I see the actual performer with my own eyes, when I hear how he breathes and works, do I feel that I am taking part in the music as it takes form. Current music leaves much unsaid, that`s why I identify with it so closely. Something said with finality, in the only possible way, automatically recedes into the past. Music that is truly contemporary represents an effort to make us aware of ourselves, of our fears desires and longings, is just a reminiscence of the past. [Tadeusz Wielecki, interview with Marta Ługowska, 1988, trans. Maja Trochimczyk]