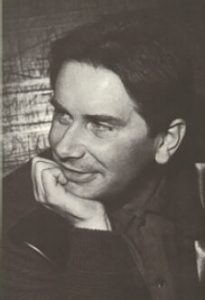 Tadeusz Baird studied composition privately with Bolesław Szabelski and Kazimierz Rytel during World War II, and later was a student of Piotr Rytel and Piotr Perkowski at the State Higher School of Music in Warsaw. He studied piano with Tadeusz Witulski, and for three years he studied musicology at Warsaw University. In 1959, 1963, and 1966 he won first prize at the UNESCO International Composer’s Rostrum. Among his other honors, he received the State Award, the City of Cologne Prize, the Polish Composers’ Union Award, the Koussevitzky Prize, the Award of the Andrzej Jurzykowski Foundation in New York, the Honegger Prize, and in 1977 he was named professor of composition at the Academy of Music in Warsaw.

Baird began to compose at a time when new means of musical expression were not well received in Poland. In 1949, he founded “Group 49” along with Kazimierz Serocki and Jan Krenz with an aim to write communicative and expressive music according to the social-realistic ideology of the state. Again with Serocki, Baird founded the “Warsaw Autumn” international contemporary music festival in 1956. Four Love Sonnets and Ballad About a Soldier’s Cupillustrate this period in his creativity well.

A more radical musical language fused with new means of expression appeared in his 12-tone String Quartet (1957) and in Four Essays for Orchestra (1958). A mixture of strong emotion, discipline, inventiveness, and spontaneity are the characteristic features of Baird’s music. As a composer deeply rooted in the dionysian, romantic stream of art, Baird fully deserved the epithet of a twentieth-century Romantic and, as such, he was mostly interested in the lyrical and dramatic aspects of music.

In his lyrical compositions, the melodic lines are played by the more expressive solo instruments in an emotionally moving way (e.g., oboe in Four Dialogs, and violin in Espressioni Varianti). Baird sets a high value on the voice, particularly the full, rich soprano or mezzo-soprano, for which he composed song cycles on texts by Małgorzata Hilar and Halina Poświatowska. Among the Polish composers of the twentieth century, Baird seems to be the most typical proponent of musical lyricism, a tradition deeply rooted in the works of Chopin, Schubert, Karłowicz, Mahler, and Berg.

Baird In His Own Words

What does composing mean for me? Very different things. It is a need to express myself, which sometimes comes with the strength that is nearly physically experienced. These are, perhaps, the best moments, when one is capable of imagining, even only in general outlines, a new piece of music. At these moments it seems that the music will be good and beautiful; at these moments one has a very strange, almost supernatural feeling that one is able to create something from nothing. But composing also means months, or often years, of very annoying, tiring and troublesome work on capturing, on materializing something that by its very essence is a denial of “matter” – i.e., a fleeting impression, thought, idea. This is the hard labor of the most perfect and final formulation of a work, captured and fixed to the best of my ability. Finally, composing also means feeling tired and discouraged. It is also a sense of dissatisfaction, periods of mental vacuum, exhaustion, and anxiety that one has nothing more to say.

The overwhelming majority of my compositions forms successive chapters in my most private autobiography. These works fix in musical notation the story of my experiences, spiritual states, and impressions that have accumulated in time.

Obviously, I now compose differently than before. This is certain. One could list a whole series of secondary differences between my present and former ways of composing. It is much more important, however, that in time I gain (or so it seems to me) more responsibility; a responsibility only for myself, for my every thought, for every note I write. This is why, with the passing of time, I compose with ever greater difficulty, I write much slower now than before. One of the consequences of this state of being is that composing gives me now less pleasure, less joy. It gradually becomes something – so to speak – more significant and serious. […] Very rarely do I write from the beginning to the end. I leave “white spots” that I cannot hear yet. With painstaking effort, I later fill them in. The writing out of the score takes place very late in the composition process and lasts for a very short time. To imagine the whole composition is the most difficult stage of composing. Actually, it annoys me – because the work for me is ready, and I still have to write it out.

In art, the best guarantee of true progress, is a connection, however rare, of talent, intellectual restlessness and artistic honesty with the knowledge of and respect for the tradition. The absence of any of these elements leads often to epigonism or to seeking effects and attention, it leads to a “pretended” avant-garde, to following fashions.

I do not belong with people who like to ruin and destroy. I would like, to the best of my ability, to find myself in the broadstream of national tradition. The musical opinion calls me a ‘romantic’ and I admit to being a romantic myself.

Music for Solo Instrument and Orchestra

Wariacje bez tematu [Variations without a theme] — (1961-62). Score for orchestra, in pencil. 16 bifolios of PWM music paper with 26 staves (bifolio No.1 has 30 staves), folded in half, the piece begins in the central bifolio (donated by Alina Baird in 1985).

The PMC Collection also includes numerous photos, books, concert programs, recordings, articles, and other material about Tadeusz Baird. The majority of this archival material was donated by Halina Baird in September 2000.

APERTO 86421: Colas Breugnon-Suite in Old Style (for flute and orchestra)