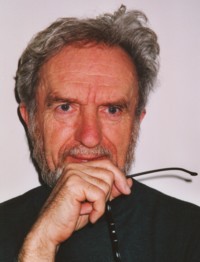 Zbigniew Bargielski studied law at the Maria Curie-Skłodowska University in Lublin (1954-57). In 1958 he began studying composition at the State College of Music in Warsaw under Tadeusz Szeligowski. After his teacher’s death he continued his studies under Bolesław Szabelski at the State College of Music in Katowice, where he gearned a degree in composition in 1964. He continueded his studies under Nadia Boulanger in Paris (1966-67) on a French government scholarship, and also at the Hochschule für Music in Graz (1972). Since 1976 he has been living in Austria, where he is engaged in teaching.

Bargielski’s compositions have been played at numerous festivals of contemporary music, such as the Warsaw Autumn, Muzicki Biennale Zagreb, Festival de Paris and Steirischer Herbst in Graz. He has received prizes at composers’ competitions, among them the First Prize at the Young Polish Composers’ Competition for his Parades for orchestra (Warsaw, 1965) and the Second Prize at the Arthur Malawski Composers’ Competition (Cracow, 1976), as well as Special Mention at the UNESCO International Composers’ Rostrum (Paris, 1981) for the Alpine String Quartet.

In his compositions Bargielski applies his own method of the organization of sound material. It is based on balancing the proportions of quantity, dynamics and instrumentation that occur between center sounds (specially isolated) or constant harmonic centers (sets of sounds) and the remaining sounds of the twelve-tone scale (neutral or “neutralizing” sounds). The composer refers to the system based on this method as “the theory of center structures.” For the first time he put this theory into practice in his Rose Garden (1971); subsequently he used it in most of his works (such as Concerto for Percussion, Violin Concerto and String Quartets Nos.1 and 2, among others).