Ewa Trębacz (pronounced Eva Trembatch) is a Polish-American composer permanently residing in Seattle. Her works range from purely instrumental (solo, chamber, and symphonic) to compositions with computer-generated sound, soundtracks for experimental animated films, and audiovisual pieces. Space is an integral part of Trębacz’s works, and frequently acts as a catalyst for improvised actions performed in spaces with unique acoustic features. She creates her improvisations in collaboration with invited musicians, and records them using three-dimensional (immersive) sound recording techniques (Ambisonics). Then she uses them as sound material for her future compositions.

Trębacz studied composition with Bogusław Schaeffer at the Academy of Music in Cracow, graduating in 1999. In 2004 she became one of the first doctoral students in Digital Arts and Experimental Media (DXARTS) at the University of Washington in Seattle, from which she obtained her PhD in 2010. Currently she works at DXARTS as a Research Scientist, where she has taught courses related to electroacoustic and computer music as well as digital arts. While in Seattle, she returned to the violin and to public performances after completing private studies with Finnish-born violinist and teacher Ilkka Talvi.

In 2009, her composition things lost things invisible for Ambisonic space and symphony orchestra became a recommended work of the 56th UNESCO International Rostrum of Composers in Paris. Her single-composer CD was released in 2013 by Polish Radio, the Polish Composers’ Union and Polish Music Information Centre in the series Polish Music Today.

Since 1998 Trębacz has cooperated with the Animated Film Studio of the Jan Matejko Academy of Fine Arts in Cracow (primarily with Robert Sowa). In 1999 she won the City of Cracow Artistic Scholarship. She has received composer commissions and grants for artistic projects from many festivals, institutions and ensembles, including the Klangspuren Festival, Warsaw Autumn Festival, Polish Composers’ Union, the National Forum in Wrocław (Poland), the University of Washington School of Drama, Mid Atlantic Arts Foundation / USArtists International, Allied Arts Foundation (grant ‘Listen UP!’ Music by Women, 2018), Seattle Modern Orchestra, and Seattle-based ensemble Kin of the Moon. Her electroacoustic works have been presented, among others, during the International Computer Music Conference (ICMC) and the conference of the Society for Electro-Acoustic Music in the United States (SEAMUS), New York City Electroacoustic Music Festival (NYCEMF), Mise-En Festival, and Splice Festival 2, as well as many other festivals and conferences dedicated to electroacoustic and computer music. 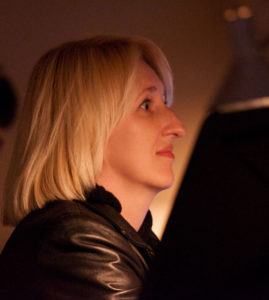 Ewa Trębacz’s music was featured during the 2011 PMC spring concert, Polish Music: the New Generation. She is pictured watching the concert from the soundboard as her work Minotaur is performed by Josiah Boothby, French horn. (Photo credit: Brian King)

ANC’L’SUNR – spatial soundscape with orchestra in the foreground (2013)