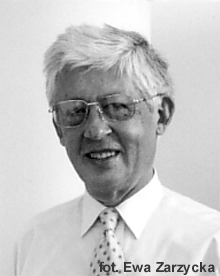 Marek Stachowski was born in Piekary Sląskie in 1936. He studied with Krzysztof Penderecki at the State Higher School of Music in Kraków. He also received a degree music theory. Stachowski died in Kraków on 3 December, 2004.Marek Stachowski was the winner of many competitions for composers, including the International “Gaudeamus” Foundation competition (1968), A. Malawski Competition in Skopje (1969), and the K. Szymanowski Competition (1st prize, 1974). His pieces Neusis II, Divertimento, and String Quartet No. 2 were honoured at the International Rostrum of Composers in Paris (1974, 1979, 1990). In 1976 Marek Stachowski received a Music Award of the City of Monchengladbach, in 1979 Prize of City of Cracow, in 1981 2nd degree Minister of Culture and Art Prize, in 1989 Minister of Culture and Art Prize, and in 1989 for a musical work for children. In 1999 he won the Alfred Jurzykowski Foundation prize in New York. In 1996 he was awarded a special prize by the Cracow voivodship. Apart from composing, he taught at the Cracow Academy of Music (and since 1979, at the Jagellonian University). In 1975 he lectured in composing at Yale University, and in 1978 at the summer courses in Durham. During the 1979 and 1984 Gaudeamus Music Week he conducted seminars in Amsterdam; in 1987 he taught courses for composers at the Rubin Academy of Music and Dance in Jerusalem. In 1994 he gave a cycle of lectures at South Korean universities. He served on the juries of many international competitions for composers and performers. In 1993 he was appointed rector of the Cracow Academy of Music.