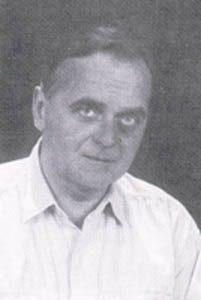 Born  in Warsaw, Krzysztof Knittel studied sound engineering and composition with Tadeusz Baird, Andrzej Dobrowolski and Włodzimierz Kotoński at the Academy of Music in Warsaw. Since 1973 he has collaborated with the Experimental Studio of the Polish Radio. During 1974-1975 he studied computer programming in the Institute of Mathematics of the Polish Academy of Sciences. He also took part in the new music courses in Darmstadt (1974, 1976). Knittel is a co-founder of several live electronic and intuitive music groups: KEW Composers’ Group (with Elżbieta Sikora and Wojciech Michniewski, 1973-1976), Cytula Tyfun da Bamba orchestra (1981), Independent Electroacoustic Music Studio (1982-1984), Light from Poland (1985-1987), and the European Improvisation Orchestra (1996). Knittel was also a co-organizer of the new wave ensembles Go-Go Boys and Box Train–-performing with poets, artists, film and video producers. In 1978 he worked for The Center of the Creative and Performing Arts in Buffalo. In 1989 Knittel, together with Mark Chołoniewski, founded the CH&K Studio which gave concerts in Europe, the United States and Canada. A composer and performer, Knittel is also active as a journalist and critic (contributing to the periodical Tygodnik Literacki and collaborating with the Music Department of Polish public television). He ha taught at New Music seminars and courses in Kazimierz Dolny, Munich, Boston, Philadelphia, Barcelona, Alicante, Budapest, Prague and Vitasaari. In 1985 Knittel was awarded the Solidarity Prize for his String Quartet, written in a tribute to Father Jerzy Popiełuszko. His international honors include the 1998 Award of the Foundation for Contemporary Performing Arts in New York.

Krzysztof Knittel also served as Vice-Chairman of the Polish Section of the ISCM (1989-1992) and Vice-President of the International Contemporary Music Festival “Warsaw Autumn” (1995-1998). In 1999 he was elected President of the Polish Composers’ Union. Since 1990 he has organized concerts at the Center of Contemporary Art at Ujazdowski Castle. Knittel composes music for chamber ensembles, solo instruments, electronic and computer music, music for theatre, television and film. His principal works of recent years include: Histoire I for tape (1988), Histoire II for clarinet, piano, synthesizer and tape (1988), Bits and Pieces for instruments and tape (1988), Histoire III or harpsichord and tape (1989), Man-Orchestra, version for keyboards (1989), Jingle-Jangle for voices and keyboards (1989), Borders of Nothing for synthesizers (1990), Man-Nature, graphic computer music (1991), Homage to Charles Ives for chamber ensemble (1992), 14 Variations by Piotr Bikont and Krzysztof Knittel on 14 Variations by Edwin Morgan on 14 Words by John Cage (1986/92), and Instant Reactions for instruments and computer (1992).

Form A; Form E for wood-wind quintet and lights (1973)
Dirokos seven miniatures for string quartet and tape (1977)
Five Pieces for cello and piano (1980)
Man-Orchestra I for any instruments and tape (1982)
String Quartet (1985)
Man-Orchestra II for computers and objects (1988)
Borders of Nothing for computers (1990)
Homage to Charles Ives for flute, oboe, clarinet, basson, piano, percussion, viola, and double-bass (1992)
14 Variations by Piotr Bikont and Krzysztof Knittel on 14 Variations by Edwin Morgan on 14 Words by John Cage for voices and computer (1992)
Instant Reactions for instruments and computers (1992)
Homage to Barbara Zbrozyna for synthesizer and tapes (1997)

Points/lines for clarinet, tapes and slides (1973)
Three Songs without Words for soprano and tape (1987)
Histoire III for cembalo and tape (1990)
Between for piano and tape (1993)
Negev for percussion instruments and synthesizer (1993)

About the String Quartet

I wrote down these notes in 1976–it was supposed to be my first string quartet. But it was not composed at that time; instead some fragments were included in the composition devices for string quartet and tape. I returned to this score (sketches and notes) in 1987 and I arranged them into a certain whole, giving the work a significant title, or rather subtitle, “Ursus” [the name of a tractor factory where some of the strikes were taking place in 1976]. This was the year filled with repression of the communist rulers against the mutinies of the workers in Radom and the Ursus factory near Warsaw. I do not know if music is capable of expressing the concrete emotions and feelings of its creator; probably not, and this is why it is sometimes worthwhile to refer to the events with which certain compositions are associated. As far as the notation itself is concerned–pencil, or pen, or computer? This is of no significance for me. One may note the ideas in all of these ways–in the form of a handwritten score on the staves, in a recording, or on a computer disc. What is written down is important (so that one would not have to be ashamed of it!)