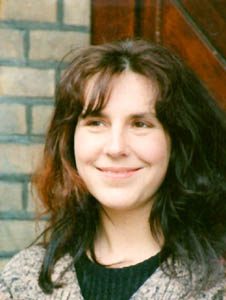 Hanna Kulenty began her music education studying piano at the Bacewicz Elementary Music School in Warsaw. Between 1980 and 1986 she studied composition with Włodzimierz Kotoński at the Chopin Academy of Music in Warsaw. From 1986-1988 she did her postgraduate work in composition with Louis Andriessen at the Royal Conservatory of Music in The Hague. She participated in the International Courses for Young Composers organized by the Polish Section of the ISCM and the International Summer Courses of New Music at Darmstadt. In 1985 her composition for orchestra, Ad Unum, received Second Prize at the European Young Composers’ Competition, organized in Amsterdam by the European Cultural Foundation to celebrate the continent’s unity. The theme of her work, a dissonant, dramatic and well-crafted study of convergence towards musical unity, was eminently suitable for this occasion. The same piece by the 24-year old composer, performed at the Warsaw Autumn Festival, elicited an enthusiastic response from Jan Weber, a very powerful music critic, who warned Kulenty’s male colleagues: “Gentlemen, hear and tremble!”

Hanna Kulenty received numerous awards and commissions, including the DAAD scholarship to Berlin, Germany (for senior artists in many disciplines), as well as composition commissions and scholarships from the governments of Poland and Holland. Ms. Kulenty has taught composition at courses and seminars in several European countries; her music has been featured at festivals in Poland, Denmark, England, Germany and Holland. Her music is currently available on three CDs and has been broadcast and recorded across Europe. In December 1996, the Hamburg Opera premiered her Mother of Black-Winged Dreams at the Munich Biennale. The opera explores the difficult subject matter of multiple personality syndrome and touches upon issues of suffering, child abuse, and gender relations. With the libretto by Paul Goodman, a Canadian writer who lives in Holland, this chamber work is structured as one long arch of increasing tension, spanning the duration of the piece.

Kulenty’s compositional style has evolved during the years. Her earlier music, consisting of many layers of simultaneous “arcs” which begin at different points of their emotional trajectories and proceed at different speeds, often calls for vast instrumental resources (two symphonies, Piano Concerto, Violin Concerto). With the richest sound palette, her preferred medium has been the symphony orchestra, but Kulenty has also  written numerous chamber works. Commentators have often compared her orchestral style to Penderecki or Xenakis; she shares their flair for drama, expressive intensity, and relentless, layered rhythms. Formidable technical difficulties make One by One for solo marimba a showpiece of instrumental virtuosity. This work was composed in 1988 and premiered at the Pascal Zavaro Festival, Paris, Radio France, in January 1991. Another solo work, Still Life with a Cello was commissioned by the Schleswig-Holstein Festival in Germany, composed in 1993 and premiered at the Festival by Polish cellist, Andrzej Bauer. It is a counterpart to the earlier Still Life with a Violin composed for Krzysztof Bakowski. Both works share a rhapsodic playfulness with time, and a selectiveness of pitch material, though the cello composition is somewhat more repetitive, with more regular rhythmic patterns.

The subsequent turn towards minimalism in Kulenty’s works may be attributed to studying with Andriessen. Kulenty calls this phase of her oeuvre “European trance music” and often structures her compositions as single, powerful arcs. Good examples of this style include A Fourth Circle for violin and piano (1994) and A Sixth Circle for trumpet and piano (1995). The melodic instrument in A Fourth Circle could be a violin, viola or cello; the work is most frequently performed in the violin version. It was premiered at the New Music Festival, Musikhost, in Odense, Denmark, in 1994; the main theme of the festival was, “Three Polish Women: Bacewicz, Moszumańska-Nazar, and Kulenty.” A Sixth Circle for trumpet and piano, shares the melodic traits with its predecessor: microtonal inflections and long stretches of held notes in the trumpet, driving ostinati in the piano. Kulenty credits her intuition and the subconscious as the sources for the haunting sonorities and compelling emotional intensity of the music she creates. Whatever the explanation, the result certainly deserves our attention.

Hanna Kulenty’s works are published by Donemus and PWM.

Przypowieść o ziarnie [Parable of the Grain], monodrama to texts from Three Women by Sylvia Platt (in Polish), composed in 1985 and premiered at a 1985 PTMW Concert in Piwnica na Wojtowskiej, Warsaw

The Mother of Black-Winged Dreams, opera in one act (1995). Libretto in English by Paul Goodman. Premiere at the Munich Biennale 1996, dir. Claus Guth

Works for Orchestra and Large Ensembles

Prośba o Słońce [Request for the Sun] for tape (1984), realized at the Electronic Music Studio, Academy of Music, Cracow, premiered at Darmstadt, 1984
Souvenir from a Sanatorium for computer TX816, McIntosh, Yamaha KX88, and Synclavier (1988), premiered in 1988 at the Courses for Young Composers, Parczew, Poland

An arch is simply a structure of a defined emotional course, of a defined climate, containing a climax. At the same time, an arch does not have to follow a classical course – from the introductory phase, through the climax up to the last sounds. It may begin at any place, for example from the climax.

I like to write very much as if the work began from the middle, from the climax. Only later does everything fall into an order in which every arch has its own length, develops in its own way, and not at all simultaneously. This is exactly how both of my symphonies are constructed. […] A polyphony of arches is an overlapping of several arches, combined in such a way that the work as a whole will have the form of an arch. I also try to arrange the climaxes of particular arches in succession one after another, so that something like a permanent climax is formed.

I was consciously exploring these techniques in Sesto right after the performance of Ad unum. It was extremely important that I could hear my music, and because of this I wrote Sesto, Quarto, Quinto, Arci. However, later those arches of mine got into my blood and I stopped thinking about them. I simply sit down and write. Actually, already Ad unum was created from the beginning to the end without anything crossed out. The only change was that I rewrote the pencil version in ink. Today I write right away in ink. I am sure of what I do, of what I hear. Just in case, though, I begin writing a work by notating all arches on a card. I simply write about the whole work in words. But once a work exists, I don’t change it.

Trigon consist of three arches. The first one is formed by piano and orchestra chords, the second one – by a variety of glissandi in strings, harp and percussion, while the third arch is a spectrum of low bass sounds (percussion and bassoon, which are gradually accompanied by more and more instruments). Each arch has its own development. The climax of the first one has been shaped by a swift sequence of chords, which subsequently fade away. The first arch ends at the top point of the second one: the glissandi culminate in a heterophonic quick movement. The third arch begins at the highest point of the second arch, its entry is “flat” or “horizontal” in spatial terms; thus it does not overlap with the second arch, but rather branches out from it.

Most works composed after 1994 published by Muziekgroep Nederland (Donemus):