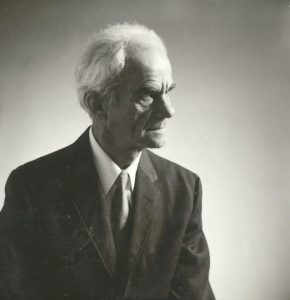 Roman Maciejewski was born of Polish parents in Berlin on 28 February 1910. His musical education, which started at the age of five included studies at the Stern Conservatory in Berlin (with S. Goldenweiser) and at the State Conservatory in Poznań, from which he received his diploma as a concert pianist. While still a very young man, he was director of the largest choir in Poznań (Moniuszko Choir) and toured with this group through Poland and Germany. In 1932 he entered the Academy of Music in Warsaw (where he studied with Szymanowski) but left without completing his studies to embark on a tour of the Balkan states with recitals of his own piano compositions. In 1934 Maciejewski joined the group of pupils of Nadia Boulanger in Paris. At a performance of his concerto for two pianos in London he met Kurt Joos who then commissioned music for two ballets. In 1939 Maciejewski began his first “Swedish” period – he married a Swedish dancer and lived in Sweden for twelve years, active as a composer and pianist. He composed music for several theatre productions of Ingmar Bergman, including Camus’s Kaligula. While in Sweden, he began his life-work, the Missa pro defunctis – Requiem, which he finished fifteen years later. This monumental piece is dedicated to all the victims of all wars and remains Maciejewski’s best known and highest-regarded composition. It was premiered during the International Festival of Contemporary Music in Warsaw in 1960. In 1951, Maciejewski moved to the United States and spent a period of 26 years in California, living in Redondo Beach, working as the organist for two Catholic churches, and directing the “Roman Choir” which annually toured the missions and cathedrals of California. During his American years, Maciejewski composed a number of choral pieces and masses. In 1977 Maciejewski moved back to Sweden, settling in Göteborg where he died on 30 April 1998. He is buried in his home town of Leszno, Poland.

Maciejewski’s many compositions include music for ballets, piano works, a concerto and many transcriptions for two pianos, many Masses, and Macbeth and Caligula by Camus. The Requiem is regarded as the crowning piece in his opus. The work, beginning with a motto of Christ’s words uttered from the Cross, “Father, forgive them, because they do not know what they do,” is dedicated to “the victims of human ignorance, to the victims of Great Wars, to the victims of tyrants’ prisons, to the victims of human lawlessness, the victims of breaking God’s natural order.” The work calls for very large performing forces and is rarely performed, though available on CD from Polskie Nagrania; the score has been published by PWM in Kraków. Maciejewski’s unique style blends neoclassicism with folk influences and bears traces of his fascination with ideas of creating a modern national style put forward and realized by Karol Szymanowski. His Mazurkas (known in recordings by Michał Wesołowski, published by Brevis Music Publishers in Poznań) are an original contribution to the history of this genre; they are worthy successors of the mazurkas by Chopin and Szymanowski.

Deeply depressed by the horrors, destruction and atrocities of the Second World War, I felt the urge to make a contribution to the efforts of peace-loving people to arouse a general awareness of the tragic absurdity of war. As a musician, I decided to try to make this contribution in the form of a musical work, which by its scope and intensity would make an emotional impact on the listener and direct his attention to the ideological motif of this work. Convinced that lack of respect for life is due to ignorance of the universal order and the divine law of love, I dedicated my Requiem to the victims of human ignorance and in the first place to those who died in wars of all times.

[Maciejewski’s on the history of Requiem, typescript, n.d.]

My harmonic means are based on the natural, acoustic phenomenon of the overtones. The long row of overtones provides unlimited possibilities of variations of colors, lights, shadows, and darkness. I use them, never losing the firm ground of the first four overtones. This procedure fixed my harmony in the solid frame of tonality and, being in accordance with physical and physiological laws, makes it possible for me to be at peace with nature and humans.

[Maciejewski on the history of Requiem, typescript, n.d.]

Maciejewski’s statement in one of his letters from Los Angeles (1959) resonates with the sense of a personal calling by God “as one of the infinite number of his tools.” These human tools serve to realize what “the Lord has decreed,” i.e. what may be worthy of God, and what is beautiful. Therefore one may assume that one of the fundamental traits of Maciejewski’s aesthetic stance was an understanding of religious creativity in the Biblical sense: as a personal calling and, at the same time, as a commandment of God.