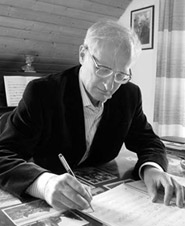 Krzysztof Meyer is one of the leading contemporary composers in Poland. From the age of five he studied piano and, in 1954, he began studying theory and composition with Stanisław Wiechowicz. After graduating from the Chopin State Secondary School of Music in Kraków, Meyer enrolled at the Kraków College of Music, where he studied composition with Krzysztof Penderecki. He graduated with distinction in 1965 and earned his theory degree a year later. In addition to his studies in Poland, during the years 1964, 1966, and 1968, Meyer was a student of Nadia Boulanger in Paris, France.

During the years 1965-1967 Krzysztof Meyer appeared as pianist with the group “MW2 Ensemble,” presenting concerts of contemporary music in Poland and throughout Europe. At this time he also performed many of his solo and chamber music compositions.

From 1966 to 1987 Krzysztof Meyer taught at the Kraków Music Academy, holding the chairmanship of the Department of Music Theory from 1972 to 1975. Since 1987 he has been professor of composition at the Hochschule für Musik in Cologne and a frequent lecturer on the subject of contemporary music in many countries, including Russia, Germany, Austria, Brazil, and Japan. Between the years 1985-1989 Krzysztof Meyer held the office of President of the Polish Composers’ Union.

Krzysztof Meyer is a winner of numerous awards, including the First Prize at the competition for young composers in France (1966), the Aaron Copland Scholarship (1966), the First Prize for Symphony No. 3 at Fitelberg Competition (1968), Grand Prix at the Prince Pierre de Monaco International Composers’ Competition for the opera Cyberiada (1970) [the manuscript of Cyberiada is in the PMC Manuscript Collection], and the two-time recipient of the Special Mention at Tribune Internationale des Compositeurs UNESCO in Paris for String Quartet No. 2 and String Quartet No. 3 (1970 and 1976). He is also a laureate of the Polish Ministry of Culture Award (in 1973 and 1975), the First Prize winner of the Karol Szymanowski Competition in Warsaw for Symphony No.4 (1974), and the recipient of a Special Medal bestowed by the Government of Brazil for his String Quartet No. 4 and Concerto retro (1975 and 1977). Among other distinguished prizes that Krzysztof Meyer has received are the Gotfried-von-Herder-Preis (Vienna, 1984), the annual Award of the Polish Composers’ Union (Warsaw, 1992), the Jurzykowski Award (New York, 1993) and Johann-Stamitz-Preis (Mannheim, 1996). Krzysztof Meyer is a member of the Freie Akademie der Künste in Mannheim.

Meyer’s compositions have been performed all over the world at international festivals of contemporary music, including the Warsaw Autumn, Musicki Biennale Zagreb, Holland Festival, Musikprotokoll-Graz, Aldeburgh Festival, Schleswig-Holstein, and the Luzerne Festival, among others. Some of his works were commissioned by or composed for the most eminent soloists: Lyric Triptych for Peter Pears, the Flute Concerto for Aurèle Nicolet, the Concerto da camera per oboe for Lothar Faber, the Pezzo capriccioso for Heinz Holliger, the Violoncello Sonata for David Geringas, Canti Amadei for Ivan Monighetti, and the 2nd Violin Concerto for Dmitri Sitkovetsky. Meyer’s Symphony No. 1 was one of the three obligatory contemporary compositions at the International Course for Conductors in Monaco directed by Igor Markevich in 1971, and his Hommage à Johannes Brahms at the Conductors’ Competition in Dublin in 1999. Krzysztof Meyer was a composer in residence for the Cologne Philharmonic during the 1991-1992 Season, and in Seattle, Washington, in 1996.

Krzysztof Meyer is also recognized as a prominent author of books and articles on the subject of contemporary music. His monograph on the life and work of Dmitri Shostakovich (first published in Kraków in 1973), was the first biography of this composer available in Poland. A new, expanded edition was published in Paris in 1994, and it became an international bestseller, translated into German, Dutch, Spanish, Russian, Polish, and Japanese. With his wife, Danuta Gwizdalanka, Meyer has published a two-volume biography of Witold Lutosławski (Kraków 2003-2004). Krzysztof Meyer’s life and work have been extensively discussed in numerous books and journal articles by authors such as Thomas Weselmann, Martina Homma, and others.

Works for Voice and Piano or Small Ensemble

Songs of Resignation and Denial (1963)
Quartettino for Soprano, Flute, Violoncello (1966)
5 Chamber Pieces for Piano, Clarinet and Viola (1967)
9 Limericks of Stanilaw Jerzy Lec for Soprano and Piano (1979)
Sunday Colloquium in the Street for Baritone and Piano (1981) 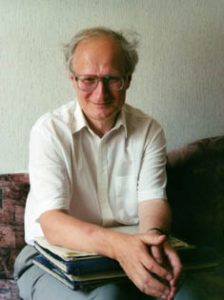 It is a paradox that thanks to Communist politics, treating culture as a means of propaganda, we succeeded in creating a musicological and compositional Arcadia. Perhaps it was not as tranquil as its ancient model, but when I look at it from the perspective of my generation, I see that in the 1970s and 1980s the Composers’ Union was not as autocratic as it was in the beginning of the 1950s. Obviously reasons for feeling threatened and dissatisfied may differ. What is worse for a composer: to have no opportunities to compose as he likes, or to not have any occasions to present his music? For some of my colleagues the first issue was a real tragedy, but luckily it ended in the mid-1950s. For others the nightmare was the second issue, the threat of social non-existence, and this threat has had a much longer life.

[From an essay on the 50th anniversary of the Polish Composers’ Union, 1995]

I consider composing Cyberiada a particularly significant experience. I worked on this opera while avant-garde tendencies were still very strong in Polish music: aleatoricism, sonorism, bruitism and other phenomena characterizing the so-called Polish school were for me something completely obvious and natural. I also was greatly attracted to these phenomena. Please note that these tendencies were expressed to the fullest in the domains of instrumental and vocal-instrumental music which featured a clearly instrumental treatment of the choir (the early works by Penderecki, Górecki, Kilar and Szalonek). Cyberiada was an attempt to transpose such phenomena into the domain of operatic music. It turned out that such techniques were perfectly suitable for music composed for the stage. Moreover, through these techniques I could realize various expressive shadings and contrasting moods – from the most dramatic to the grotesque, from melancholy to joy. I was convinced about this aspect of my music several years ago, while listening to a performance of this work (a performance of extraordinary quality, by the way) by one of the German opera houses.

[From an interview with Maciej Jabłoński, 1994]