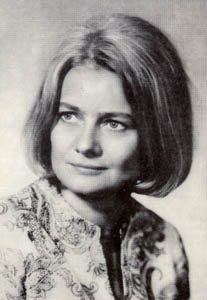 Composer Bernadetta Matuszczak studied music theory with Zygmunt Sitowski and piano with Irena Kurpisz-Stefanowa at the State Higher School of Music in Poznań. She later continued to study composition with Tadeusz Szeligowski and Kazimierz Sikorski at the Warsaw Music Academy. Afterwards, as a state scholarship recipient, she was a postgraduate student in Paris, studying under Nadia Boulanger. Matuszczak’s compositions have received numerous performances in Poland and abroad with, for example, her Septem Tubae performed at the 43rd Weltmusikfest in Hamburg in 1969, and her chamber opera Juliet and Romeo staged at the Internationale Maifestspiele in Wiesbaden in 1972.

Bernadetta Matuszczak is a prizewinner of the 1965 Young Polish Composers’ Competition organized by the Association of Polish Composers. She also received prizes at the 1966 Grzegorz Fitelberg Competition for Composers, and the 1967 by Jeunesses Musicales Competition. Since Matuszczak’s commissions and grants came almost exclusively from Polish music organizations, her name is less well-known beyond Poland’s borders.

Since her earliest compositions, Matuszczak demonstrated wide-ranging literary interests by combining an original musical imagination with a keen sense of timing and dramaturgy. Her simple, terse musical idiom highlights the communicative aspects of the texts she frequently chooses from the classic literary works of Western Europe. Her music features barely perceptible outlines of the melodic lines which, nonetheless, remain highly expressive. The sparse textures of her works from the 1960s and 1970s are close to the conciseness of Webern or the pointillist music of Nono. In more recent music, Matuszczak returned to neotonal harmonic arrangements. Her creative output consists mainly of stage works, oratorios, and songs with orchestra, as well as music for children.

Matuszczak is a deeply religious Catholic who is also profoundly affected by the horrors of the war; in her childhood she saw the graves in the courtyard of her house, she saw people who were arrested and killed. She describes herself as “marked by death” and yet maintains a positive outlook, believing that a person’s duty is to improve the world through personal goodness. Her philosophical viewpoint that “death is the only inevitability of life, which is otherwise filled with free choices,” explains the focus of many of her works on tragic moments of choice (Quo Vadis) or commemorations of the fallen (Elegy About a Polish Boy).

After setting to music the Apocalypsis, Romeo and Juliet, works by Gogol, Eliot, Andrzejewski, and other literary classics, Matuszczak turned to a Christian subject, a historical novel by Henryk Sienkiewicz, portraying the martyrdom of Christians in Nero’s Rome. Her music drama, Quo vadis, a commission from the Warsaw Chamber Opera was premiered in 1996.

Works for Choir, Soloists and Orchestra

My way of composing was quite exceptional and Prof. Szeligowski played an extremely important role in my life – without him I would not exist as a composer. I would not exist, because with my attitude, with my worship for Bach, Beethoven, and Chopin, I would not have had the courage to climb up to the summit of this Parnassus. I looked up to them in devotion and would not even attempt to start composing without Szeligowski’s encouragement. [..] Dramat Kameralny was my first piece and it opened the door for me – I received the Fitelberg prize, and was invited to join the Polish Composers’ Union directly as a regular member, without waiting, without being first a member in the Youth Circle. I was greatly cherished by my colleagues. Soon I received scholarships and commissions without which I would have been teaching. I am quite uni-directional and can do only one thing well.”

After Witold Rowicki conducted one of my pieces – a fantastic performance – I told him, “Witold, how did you guess, how did you discover what I wanted to say, you realized in your version things that cannot be written down?” For it is impossible to write down everything in notation, in graphic signs. It is a world of the spirit. Music, as all art, belongs in a spiritual domain and every form of notation loses something – there is a space that exists beyond the written signs.”

A hundred years ago, in 1896, the full edition of Henryk Sienkiewicz’s novel Quo vadis was published; in 1905 he received the Nobel Prize for this work. To attempt to measure up to a work of such a great popularity, and at the same time a work that is somewhat passé, which faded during the post-Sienkiewicz expansion of literary forms, was a somewhat crazy undertaking, requiring a great courage. I did not hesitate, however, because I wanted to show how little has changed since the time of Nero. The history of our era is continually being written by paranoiac tyrants, traitors and murderers, Wise Men and saints who die for their ideals, while girls and boys continue, as earlier, to find the ideal, beautiful love. Continuous too, are attempts to close Christianity in the book of Myths. My view of the function of art also played a significant role in the selection of this subject: “The work of art moves us and destroys the ordinariness, it also says: you have to change your life.” This fragment quoted from Gadamer’s Aesthetics reveals an Ethos of Art that I feel close to, an Ethos that is nearly identical with the Greek Katharsis and that generally inspires all of my work”. […]

The libretto of this drama is based entirely on the original text of Sienkiewicz’s novel. The course of all events in all the scenes is identical with the original. […] The music is ascetic and its expression serves primarily the expression of the Idea of Drama. The long-standing compositional controversy about the primacy of word or music in the form of the opera is not a dilemma for me. Without being equivocal I cast my vote for the opera theater, in which the sound-song expresses both the internal vibration of the words and the transmitted content. I did not hesitate to draw from the musical treasure trove of many periods, from medieval times to the present in order to recreate the climate, mood and contrasts of Sienkiewicz’s novel.”

[Matuszczak, Program note for the premiere of Quo vadis, 1996]