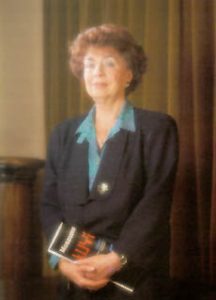 Krystyna Moszumańska-Nazar, a composer and former professor at Kraków Music Academy, began her musical education at the Niementowska Music School in Lwów (now Lviv, Ukraine). After the Second World War she settled in Kraków, where she studied composition with Stanisław Wiechowicz and piano with Jan Hoffman. After graduating she first joined the faculty of the Kraków Music Lyceum and later the Music Academy, where in addition to her teaching duties she served as Dean of the Faculty of Composition (1975-1978), Vice-Rector (1978-1987) and Rector (1987-1993).

Moszumańska-Nazar’s honors also include the Award of the Polish Composers’ Union, the Award of the Minister of Culture and Art (five times), the Award of Merit for National Culture, the Prime Minister’s Award, an honorary doctorate from the Music Academy in Kraków, and the City of Kraków Award. In spite of her long illness, she continued to write music until the last moments of her life and her catalogue of works includes about 70 titles.

Bagatelle for piano (1971). Manuscript score in black ink with red, green, and blue marks and annotations. Written in a small music book with blue cover, 22 pages.

Un petit cadeau for flute, cello and percussion, dedicated to Krzysztof Penderecki for his 60th birthday. Manuscript score in black ink, with annotations in yellow and red marker, 7 pages on the 18-stave music paper.

Fate brought me into close contact with excellent Polish percussionists, mainly jazz performers and just plain virtuosos, like M. Ptaszyńska, J. Pilch, J. Stefański, and L.H. Stevens, who inspired my imagination with their performing skills and their vast expertise in the field. They asked me to write for them, saying I understood percussion and they performed what I composed. That’s how Three Etudes for Percussion Solo came to be written, From End to End Percussion, Fantasy for Marimbaphone Solo, Warianty for Piano and Percussion, Interpretacje for Flute, Tape and Percussion, or the piece for five percussionists, Music for Five. Percussion also plays an important role in some of my chamber works, such as Pieśn nad pieśniami, Wyzwanie, Bel canto, Hexaedre, Pour orchestra, Rhapsody II, Variazioni concertanti for Flute and Chamber Orchestra, or in the Concerto for Orchestra.

There are two types of chords that I have favored in all of my music: one of them is a juxtaposition of two minor thirds, the second is built from two superimposed fourths, a perfect fourth and a tritone. I like shifting these harmonies around, but do not write them out in tables or pre-compositional systems. […] In creating one has to be an egoist, one has to express oneself.

I cannot name and define one concrete emotion which is experienced while composing music. Composing is a sum of various experiences: imagination, knowledge, it all comes into play while a piece is being formed, created. There are formal schemes that might be used or rejected, there is the emotional flow and the structuring of the tensions following the outline of a sinusoid, with greater or smaller peaks at certain points in the piece. In order for the form to be proper, the dramatic climax should be located at the point of the golden division (that is about two thirds into the course of the work) – then the form is properly structured in time. Composing requires relying on experiences, searching for best results, listening to the music. […] In the process of composing, the most important role is played by the creative imagination. Music is different because different people, different composers have different compositional talents. Everyone has a different sense of beauty and every composer creates his or her own sound world, reflecting their own experiences, thoughts and emotions. One could almost say that the character of a person “shines through” the music: one person is emotional, another one is rational, etc.