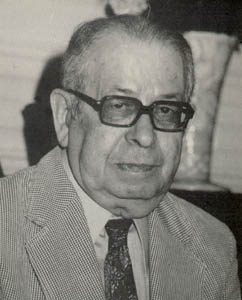 Szymon Laks was a violinist, conductor and composer. He studied mathematics for two years at Vilnius University before entering the Warsaw Conservatory, where he became a student of Roman Statkowski, Henryk Melcer, and Piotr Rytel (1921-1924). In 1926 he went to Paris to study composition with Pierre Vidal and Henry Rabaud at the Paris Conservatory. Arrested by the Germans in 1941, Laks spent three years in the concentration camps of Auschwitz and Dachau. He survived the Nazi concentration camps to tell his story in a poignant and witty memoir, Musiques d’un autre monde first published in 1948 in Paris. The revised Polish edition came out in 1979. English translation of this book was published by Northeastern University Press in 1989. The new French edition appeared in 1991 and its German translation in 1999.

Quite literally, music saved Laks’s life: as a violinist, conductor, and arranger of the camp orchestra, Laks was spared the daily ordeal of physical labor that killed so many around him. At the same time, he was a Holocaust witness who experienced first-hand the irrelevance of art amidst the total annihilation of human values in concentration camps. The wartime destruction also affected his music; many of his manuscripts were lost during the war. In 1945 Laks returned to Paris, and began promoting music in Polish emigré circles.

Szymon Laks’s compositions may be described as neoclassical. They include string quartets, symphonic suites, as well as many other chamber works and songs. Deeply moving and lyrical songs constitute a particularly interesting part of Laks’s music. Some are based on Jewish folklore, whilst others include settings of texts by Polish-Jewish poets, such as Julian Tuwim, or Mieczysław Jastrun. Many of them deal with the trauma of war, suffering and the Holocaust, movingly portrayed in such works as The Elegy of Jewish Villages or the Funeral. In addition to composition, Laks (especially in his later years) devoted much time to writing and authored several fascinating books.

A large donation of original manuscripts (scores and parts) of 11 compositions by Szymon Laks made by André Laks, his son, is an extremely valuable addition to the PMC Manuscript Collection. They include Chants de la terre de Pologne, Grande fantaisie folklorique pour orchestre (score and parts), Concertino pour Trio d’Anches (score and parts), Third String Quartet (score), Fourth String Quartet (parts), and Concerto da camera (score and parts). Another part of the Collection consists of song manuscripts: Elegia żydowskich miasteczek [The Elegy of Jewish Villages] to a text by Antoni Słonimski, Mały więzień [Little Prisoner], published as no. 1 in Trois poèmes chanteés; Trois chants de Tuwim, published as no. 1-3 in Five Songs to Poems by Tuwim; Erratum, no. 4 in the same set; and Wszystko [All], no. 5 in the same set.

The Szymon Laks Collection at USC includes 70 letters to and from the composer as well as over 20 manuscripts, donated by his son, André Laks in 2000.

The Five Songs to Tuwim’s Poems draw texts from the poetry of Julian Tuwim (1894-1953), one of Poland’s most important 20th century poets. The poems of this cycle are addressed to God and comment on the spiritual value and meaning of life. The introductory Prayer continues the Biblical tradition of arguing and fighting with God, whose presence however, gives the narrator the only source of Happiness (in the second song). The bliss of closeness to the Creator is further relished in The Covenant – recalling the peace of Noah, with a dove bringing an olive twig to the faithful who are gathered under the rainbow, in a new House of God and Gods’ people. The humorous Erratum describes a spiritual failing as a mistake on the narrator’s C.V. where “one reads ‘despair’ but it should be ‘love.'” This grievous error should be corrected and the final song of the cycle points out the perfect way of doing this, i.e. offering one’s whole life (Everything) in a complete devotion to God. The spiritual reflections and gentle humor of Tuwim’s melancholy poems find an appropriate setting in Laks’s music, with its poignant dissonances, complex harmonic progressions, expressive melodic lines, and through-composed forms.

In superimposing a text in a foreign language on the existing melodic line terrible difficulties arise. It seems to me that both translations did almost no harm to the original, I attended to this as well as I possibly could.

[Laks to Antoni Słonimski, author of the text for The Elegy of Jewish Villages, 23 September 1962]

I am delighted to notice that PWM Editors do not accept without criticism the musical-textual units provided by the composers and I am greatly impressed by this carefulness. However, in the case of the Elegy, I have to boast that not a single syllable, not a single accent were missed by me in the setting and both texts were arranged with my very active, one could almost say, merciless participation. A proof of that is provided by rhythmical variants of the vocal parts which were introduced in places where it could not be done otherwise.

[Laks to PWM Edition on the publication of The Elegy of Jewish Villages, 29 October 1962]