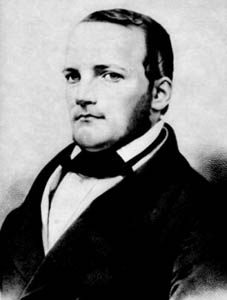 Stanisław Moniuszko was the greatest composer of operas in 19th century Poland. He was born to a family of Polish landowners settled in Ubiel, near Minsk (now Belarus), and his interest in music became evident from his early early childhood. Introduced to the rudiments of music by taking private piano lessons, Moniuszko’s formal music education begun in Berlin in 1837, where he studied composition and choral conducting under Carl Friedrich Rungenhagen. Several of his songs composed there were published by the firm of Bote & Bock and were favorably received by the music critics.

After returning from Berlin Moniuszko obtained a post as an organist in Wilno. During that time he became acquainted with the novelist Józef Ignacy Kraszewski and playwright-satirist Aleksander Fredro. These contacts stimulated his interest in dramatic music and Moniuszko began to compose  his first operas, as well as other stage works, sacred music and secular cantatas.

At about this time he also commenced work on the collection of songs entitled Śpiewnik Domowy [Songbook for Home Use], which would have wide appeal to Polish public. The first volume was published in 1843 and met with much interest among both the public and music critics. Over the years the collection grew to 12 volumes and included 267 songs with piano accompaniment. Although many of the songs are simple, predominately strophic, some take on a form of dialogues or ballads, and majority testify to the composer’s originality and melodic inventiveness with Polish folklore often being the source and inspiration for Moniuszko’s rhythmic patterns and melodies.

During his lifetime Moniuszko traveled numerous times to St. Petersburg where his concerts were very well received. Serov, the young Russian critic of the time, referred to Moniuszko’s compositions as “brilliant works.” While in St. Petersburg, Moniuszko befriended many of his prominent Russian contemporaries, including Mikhail Glinka, Mily Balakirev, and Modest Mussorgsky. To Alexander Dargomyzhsky, with whom he became very close, he dedicated his overture Bajka [Fairytale]. In 1858, thanks to the help of Maria Kalergis, Moniuszko journeyed to Paris and Berlin, paid a visit to Bedrich Smetana in Prague, and to Weimar, where he met with Franz Liszt.

Critical to Moniuszko’s career was, however, his visit to Warsaw in 1848, where he met Józef Sikorski, the future editor of the most notable Polish music journal Ruch Muzyczny, Oscar Kolberg a well-known folk song collector, and Włodzimierz Wolski a poet and future librettist of Moniuszko’s best known opera, Halka. Named after its heroine, Halka was premiered with great success in 1858 in Warsaw and later in Prague, Moscow and St. Petersburg. As a result, Moniuszko was engaged as a conductor at the Grand Theatre in Warsaw in 1859. From 1864 he also taught harmony and counterpoint at the Warsaw Musical Institute.

Halka was followed by several other major operas: Straszny dwór [The Haunted Manor], Flis [The Raftsman], Hrabina [The Countess], and Verbum Nobile. The common trait they share are librettos which depict Polish nobility and gentry with an admixture of characters of common origins who, above all, share and are faithful to Polish customs and traditions, and patriotic feelings. Poland’s loss of statehood throughout the 19th century was an important background against which Moniuszko’s operas had rallied the national spirit. Moniuszko’s music is largely representative of the 19th century opera, given the extensive use by the composer of arias, recitatives and ensembles, with the exception of Straszny Dwór, where beautifully scored choral parts testify to Moniuszko’s mastery of writing for many voices. His music incorporates many national motifs with frequent appearances of Polish dances popular among upper classes such as the Polonaise or the Mazurka, alongside folk dances such as kujawiak and krakowiak.

The most notable among his choral works are cantatas Sonety krymskie [Crimean Sonnets] and Widma [Phantoms] composed to the texts of Adam Mickiewicz, the leading poet of the Polish Romanticism. The melodic line of the former is particularly expressive and in parts of the composition takes on the form of variations.

Nocleg w Apeninach [Overnight in Apennines], operetta in one act. Text by A. Fredro. A student composition in Berlin (1837-1840)
First performance: Wilno, 1839

Masses and Other Sacral Works

Sabaudka [Savoyardess or the Mother’s Blessing], melodrama in 5 acts by d’Ennery and Lemoine
First performance: Wilno, 6 May 1845

The principal […] field of Mr Moniuszko’s activity as a compose is dramatic music; his favourite genre is French opera, created by Gluck, refined with Italian improvements by Méhul and Cherubini, later enriched with the treasures of harmony and drama of the German opera, disseminated so widely by Catel, Boiledieu, Auber, Hérold and Halévy, the sounds of the French opera are heard today from the stages everywhere across Europe. Indeed, music of this kind seems to be much more to our taste than the studied, dreamy-philosophical German style: we are so fond of this gaiety, this lightness that does not exclude the true drama, melodiousness, grace and naïveté—the ingredients of the good French opera.”

[Stanisław Lachowicz, “Moniuszko,” Tygodnik Petersburski 13 (1842), No. 80. Quoted from Grzegorz Zieziula, From Bettly in French to Die Schweizerhütte in German: The Foreign-Language Operas of Stanisław Moniuszko]