Rubinstein’s attitude toward Paderewski is worth consideration.[2]They first met in the salon of Böte and Bock, who had just published Paderewski’s first composition.[3]The face of the young artist attracted the famous musician. He inquired about him. “He is a composer making his début,” replied Commercial-Adviser Bock, glad that Paderewski had awakened Rubinstein’s interest. 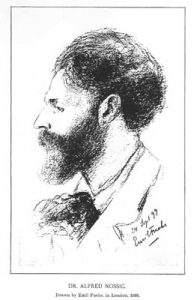 “So! I must hear him today—at once.” Paderewski brought Rubinstein one of his compositions and the latter’s heart warmed toward him still more. “Ach!” he exclaimed; “that is new; that is good, but badly played. you play like a composer. You must play better. You must play well.” But when Paderewski began to follow his advice, he did not seem to be particularly pleased. In later encounters he was cooler; and when, after Paderewski’s first triumph in America, it was proposed to Rubinstein to recross the ocean, he gruffly replied: “In my old age I can no longer dye my hair red.”[4]

I confess, however, that I belong to those to whom Paderewski is more interesting as a composer than as a virtuoso. After our first meeting in Vienna, our talk soon ran principally on the place taken in modern composition by the masters of today. I had always held that Paderewski, on account of the peculiar quality of his musical genius, was called to be the perfecter of Polish opera, just as he had become the perfecter of Polish virtuosity.[5]I soon assured myself from personal knowledge that my intuitions had not played me false. In the pauses left him by his concert tours, Paderewski busied himself with nothing more passionately than with the thought of an opera. Personal sympathy and similarity of esthetic tastes soon transmitted thought into deed.[6]The master intrusted me with the work, as difficult as honorable, of writing a libretto. Years of closer relationship have followed, thanks to which I am, perhaps, more familiar with Mr. Paderewski’s career than are many of his biographers.

We are all familiar with the principal types of pianists. The one plays the most difficult compositions with break-neck bravura, while maintaining in face and bearing an air of complete composure. Schumann once wrote by mistake at the beginning of the Sonata in G minor “As fast as possible,” in the middle—”faster”—and at the end, “faster still.” The capital stock of artists of the school of velocity is to play fast and faster. These nimble players bow at the close of their feat with consummate elegance and ease. All that is wanting is the acrobat’s kiss thrown to the audience. The other hands crouching over the piano like a jockey over his race-horse. These pianists work in the sweat of their brows. From time to time they cast at the public a side glance which seems to say: “you see how difficult this is? Now I will perform it properly.”

Different, very different, in manner and method is Paderewski’s playing. As he seats himself at the piano, as he strikes the first chord, such secure mastery, such consciousness of authority, are evident that he could say of his instrument what Puget said of his marble: “It trembles before me.”[7]

Paderewski’s technical ability is so perfect that the impression of the compositions which he is playing effaces consciousness of technic. The listener never thinks whether the piece is easy or difficult for the player, and is therefore able to give himself up completely to its charm—the more because Paderewski does not make the impression of being a virtuoso interpreting some composition foreign to himself: he seems to be a composer interpreting his own ideas. He plays everything with that spirit and warmth, with that love and coquetry, which other masters are able to develop when interpreting their own works only. He is so absorbed in what he plays, he puts into his playing so much of his own individual soul, that these alien compositions become his adopted children. The listener altogether forgets that a virtuoso in evening costume sits before him; he forgets that he has already heard the same composition unnumbered times. It is as if the atelier of a composer had opened before him at the precise time when, struck by a new thought, the master utters it in tone, in the creator’s complete, ecstatic forgetfulness of the world. Thus it is that Paderewski re-endows with their original charm those compositions that have already been played by hundreds of pianists, and restores their maiden freshness to the oldest numbers of the concert repertoire. His is the gift of unveiling the deepest feeling and the highest flight of his artist soul to his hearers, while appearing entirely oblivious of their presence. At the moment when he is thanking his audience for its plaudits, the last notes of his music still ring in his ears, and his face, trembling and flaming with inspiration, betrays something of contempt for the noisy crowd.

Not by virtuosity, but by the charm of true inspiration—that quality of delivery characteristic of the composer—does Paderewski work so powerfully upon the emotions of his hearers. In all that he plays, he remains the tone-poet that he was born. Whoever hears him feels as though, in the midst of our artificial refinements, a bard had suddenly appeared from the twilight of early time, and once more opened the springs of poetic inspiration. It would be a mistake, however, to conclude that Paderewski merely follows the elementary voice of his inspiration. On the contrary, one needs but to frequent his concerts to be convinced that he is an extraordinarily experienced artist, who knows his public thoroughly, and knows by what means to seize, warm, and transport it. The arrangement of his programs, and the plan of interpretation of each separate number, are masterly.

Paderewski possesses the secret of playing the longest symphonic work without a single moment of tedium. Perhaps the secret lies in the fact that in response to his peculiarly artistic temperament, symphonic music becomes dramatic, and is filled with action, contrast, and surprise. The mobility of the tempos, the intensity, and the tone-coloring become a mighty force in the hands of this dramatic musician. The soul is raised to heaven by a noble choral suddenly a soft idyl unfolds itself before the spiritual eye; a love-duet trembles in tones sweet, hardly audible; scarcely has its quiet poetry soothed the spirit when, with boisterous song, a swarm of gay dancers storm across the stage, or thunder peals, and the deep tones of an organ vibrate in the air. All these dramatic surprises, combined with consummate art, electrify and enchain the listener, be he even as blasé as the public of the Salle Erard or of St. James’s Hall.[8]

[1]. This and all subsequent notes by Maja Trochimczyk. The article was originally published as “The Methods of the Masters of Piano-Teaching in Europe: The Secret of Paderewski’s Playing” in Ignacy Jan Paderewski et al., ed. The Century Library of Music vol. 18 (New York: The Century Co., 1902), 610-612. Alfred Nossig was a Jewish writer, political activist, lawyer, and sculptor, the librettist of Paderewski’s only opera, Manru. See Maja Trochimczyk, “Rediscovering Paderewski,” editorial for Polish Music Journal 4 no. 2 (2001), including a reprint of the libretto of Manru. [Back]

[2]. Anton Rubinstein (1829-1894), Russian pianist and composer, one of the most famous and influential pianists of the 19th century. He co-founded the Russian Music Society and the St. Petersburg Conservatory, performed as a pianist and conductor in Europe, and first toured the U.S. with Henryk Wieniawski in 1872-73 giving over 200 recitals. [Back]

[5]. The pressure on Paderewski to compose a “national” opera of Poland was less severe than that exerted on Chopin by his teacher, Elsner and others. Neither composer had a profound interest in writing for the stage and both preferred composing for the piano. [Back]

[6]. Here, Nossig presents the genealogy of Manru as if the idea of this collaboration came from Paderewski. In fact, it was Nossig who repeatedly contacted Paderewski and sought to collaborate with him on an opera project. After the rejection of first proposal, they agreed to work on an opera based on a novel by Kraszewski about ethnic conflicts between Poles and Gypsies, Chata za wsią. See Andrzej Piber, Droga do sławy: Ignacy Paderewski w latach 1860-1902 [The road to fame: I. P. in the years 1860-1902]. (Warszawa: PIW, 1982).[Back]

[7]. Pierre Puget (1622-1694), French sculptor, architect and engineer, active in France and Italy, author of many sculptures in the Louvre. [Back]

[8]. The most famous concert halls in Paris and London, respectively. [Back]