There were five of us – Brachocki, Szpinalski, Sztompka, Tadlewski and I.[2] Usually at the end of June we converged upon Morges, which was in the immediate proximity of Paderewski’s estate, Riond-Bosson.[3] We spent the initial few days searching for lodgings and arranging the rental of pianos, which had to be brought to Morges from Lausanne. Then we commenced the work. Our lessons were held on Saturdays, in the afternoon. Naturally, before each lesson we went through a range of intense emotions. The person of Paderewski emanated a wondrous light, goodness and grandeur all rolled into one, that rendered one timid in his presence. Yet, just a few of his words would put one at ease. Gazing in his eyes made one much like a child, filled with love and respect, aspiring to be better. We arrived for the lesson in silence, no words passing between us, readying ourselves in inner concentration to receive his words and his teaching. We stepped into the hallway excited and deeply stirred at the prospect of the great effort and joy that awaited us. We listened to his footsteps approaching; then Paderewski entered and cordially greeted each one of us.

The room Paderewski uses as his workplace (studio) is large and well lit but modest. At the onset we arrange the order in which we will be playing. It depends on the character of the compositions, which are organized in a sequence developing along certain lines. Paderewski sits at the upright; we are at the grand piano. One of us is selected to play first. Paderewski listens attentively and is very serious. There is a feeling of great spiritual effort in the air. After a few moments Paderewski stops the performer and comments upon his work. I’m having difficulty relating all of this in just a few words – I’ll attempt to list only what was the most fundamental and important in Paderewski’s teachings.[4] So, above all, everything is based upon strict musical principals, to which every pianist should faithfully adhere. Following are a few of them. If there are four beats to a measure then the second and fourth beat are considered as, so called, weak beats, and should never have an accent placed upon them. If there are three beats to a measure we should try to put an accent on the first beat. When the melodic progression begins from the low registers and is rising we have a crescendo, if it is falling – decrescendo. All the while the rhythm must be vigorous and unfailing. One should watch out not to accelerate or slow-down at will because such practice raises a threat of mannerism. All minute, purely technical details must be treated most thoroughly, so that the performer does not leave the impression of having struggled with technical difficulties. At the same time the pianist should not forget, that, while technique leads towards and facilitates reaching his goal, it should not become an end in itself. The use of pedal is fundamental to competently playing the piano. One needs to be well aware of when and how to use it. Often the most beautifully sounding phrases are the ones played without the use of the pedal. There never was nor ever will be a pianist who elevated the art of using the pedal to such heights as Paderewski. Thanks to his skill with the pedal he was able to draw out of the instrument sounds which were quite incredible. All the while, he says, the playing has to be wholesome, clear, without false sentimentality, yet, truly poetic. While studying piano one has to think about all that long and hard – but when all the intellectualizing is done one must forget it and just play; if one plays with one’s heart and has something to say it will always find its expression in the music. It is this expression and truth that matter most. Our music has to speak straightforward to the audience. It has to be comprehensible – the listener, must forget his everyday concerns, and feel, at least for a moment, elevated above them. If we are able to achieve that we’ll be happy… When our Master has finished teaching and he begins to play the emotion grips at our throats because we sense the fervent heart and the tender soul of our great countryman.

At six, during the break, we took tea and looking at us one was immediately able to distinguish those who had already played from those whose turn was still to come. Those finished were joyful and gregarious, stuffing themselves with all sorts of delicious tidbits, the others were still serious, collected and hardly able to swallow anything. At about seven we continued the lesson, which finally ended when everyone finished playing his pieces. After going through our repertoires each one of us was dead tired, but Paderewski, who during the entire time (the lessons sometimes lasted up to six hours) listened attentively, played, and lectured, showed no signs of fatigue. Until the very end he taught and played with the same liveliness and gusto. Sometimes when our Master played I observed my listening colleagues and noted in their faces the effort to retain his every remark, to memorize every sound. And what a joy it was when after one of us finished playing his piece Paderewski would say: “This will be a great number.” These sessions with Paderewski were more than just piano lessons – they were generous gifts of such treasures as truth, sentiment and affection. 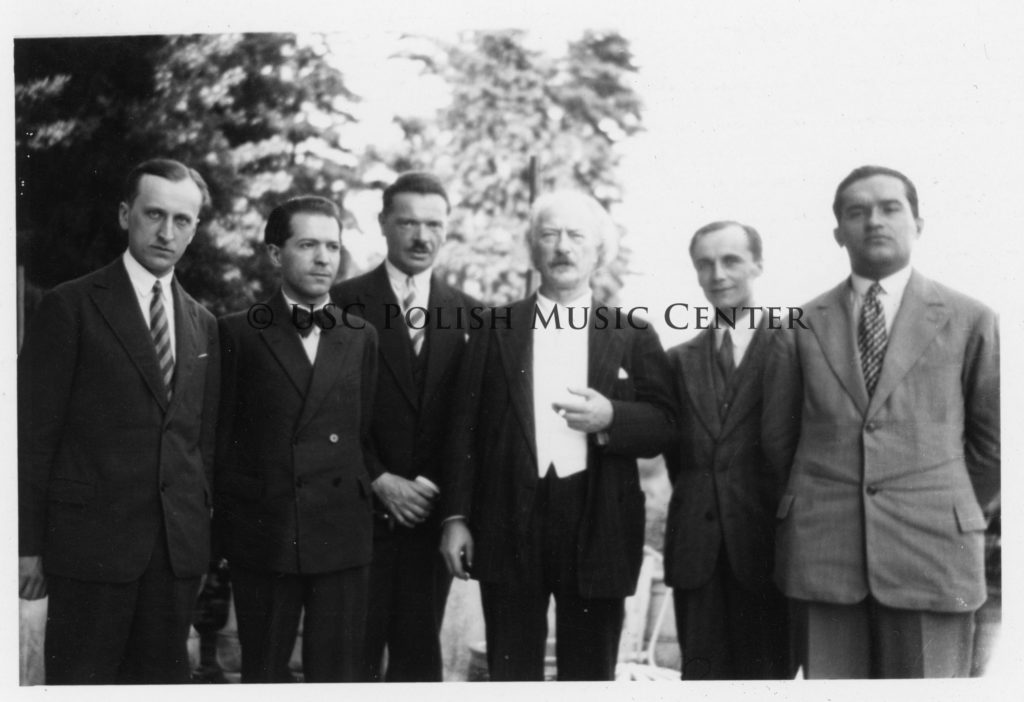 After the lesson there was supper. What a delectable and bubbling sense of joy we all felt. Paderewski enjoyed looking at smiling faces and appreciated a healthy appetite. The cuisine at Paderewski’s was superb and the wines exquisite. At the table across from him sat his sister Mrs. Wilkońska, who was so kindly disposed towards us that we all adored her. She personally selected the best cuts of food for those who sat beside her. The mood was gay and we rarely spoke of music. Instead Paderewski told stories of his many travels. Who once heard Paderewski’s storytelling will never forget it. Not only the content but the form and the choice of words – the beauty of Polish language – it was true art. In everything Paderewski did, whether he spoke or played one could always recognize the mark of his greatness and genius. Late at night, on the way back home, we talked of the evening. Those lessons and the time spent with Paderewski were treasures to last for the rest of our lives, our hearts were full of happiness and joy because of our good fortune. And for the Maestro we felt love, deep attachment and gratitude.

[1]. Original publication data: Zygmunt Dygat, “Lekcja z Paderewskim,” in Życie muzyczne i teatralne vol. 2 no. 5/6 (May-June 1935), 27-28. Zygmunt Dygat (1894 – 1990), studied the piano in Kraków, Vienna (with Lalewicz), and with Paderewski at Riond Bosson (1928-1932). He also studied the history of art at Jagiellonian University, Kraków. His concert tours took him to Europe and the U.S.; during World War II Dygat gave over 200 charitable concerts in France. After the war he settled in Paris. [This and all subsequent notes are by the editor, Maja Trochimczyk]. [Back]

[2]. Paderewski had very few disciples with whom he spent larger amounts of time; the group listed here is the “second generation of his students,” the earlier international group included Zygmunt Stojowski and Ernst Schilling. Aleksander Brachocki (1897-1945), pianist and composer of Polish-American descent; student of Zygmunt Stojowski and Ignacy Jan Paderewski, in 1939 returned to Poland to teach in Katowice and concertize around the country. Stanisław Szpinalski (1901-1957) received a prize at the 1927 Chopin Competition; taught piano at Łódz, Poznań, and Warsaw. Henryk Sztompka (1901-1964) received a prize at the Chopin Competition in 1927; taught piano as a professor of the Kraków Academy of Music and specialized in Chopin repertoire. Albert Tadlewski (1892-1945), Polish pianist; studied in Lwów, (now: Lviv), Vienna (with Godowsky and Rosenthal), and with Paderewski. Tadlewski was the founder of the Institut International de Musique in Nice, France. The most famous pianist from the Paderewski school was Witold Małcużyński (1914-1977), who received a prize at the 1937 Chopin Competition and emigrated at the time. [Back]

[3]. The Villa Riond-Bosson was the name of Paderewski’s estate near Morges, Switzerland. Paderewski resided there since 1899; after his death the estate was sold; a Paderewski Museum and Society are now located at Morges and publish the Annales Paderewski periodical. According to Arthur Rubinstein, the residence resembled “neither a villa nor a chateau, reminding me rather of a comfortable, large pension de famile at a summer resort.” Rubinstein’s My Young Years (London, 1973): 74. Cited after Adam Zamoyski, Paderewski: A Biography of the Great Polish Pianist and Statesman (New York: Atheneum, 1982). [Back]

[4]. More information about Paderewski’s view on interpretation may be found in his lecture on Chopin in the present issue of the Journal and the study of tempo rubato reprinted in PMJ 4 no. 1 (summer 2001). [Back]