This year the Polish Royal Opera hosted its 5th Festival featuring a plethora of Polish music from July 2nd to July 24th. The Festival included twelve performances and concerts. One of the festival’s biggest highlight events was the premiere of Zygmunt Krauze’s The Night of Ravens that took place on the first day of the Festival. The premiere performance was directed by Waldemar Raźniak and commissioned by the Polish Royal Opera.The libretto for this one-act opera was prepared by Małgorzata Sikorska-Miszczuk based on Ballades and Romance and Dziady by famed Polish poet Adam Mickiewicz.

Over the course of the Festival, the audience had the opportunity to experience two musical interpretations of Mickiewicz’s poetry: the first being the Krauze opera, and the second being Stanisław Moniuszko‘s Widma cantata, which was heard on July 14 on the Old Orangery stage.

Other performances prepared by the Polish Royal Opera in previous years will also return to the stage of the Royal Theater: the humorous Poverty by Maciej Kamieński, The Haunted Manor and the Songbook for Home by Stanisław Moniuszko, and–for the first time with the participation of the audience–The Job by Krzesimir Dębski. The Festival program also features the concert version of one of the first Polish operas–Agatha or the Master’s Arrival of Jan Dawid Holland.

There were also events for chamber music lovers. Olga Pasiecznik gave a recital which included a song featuring children’s songs (though not necessarily for children) by Karol Szymanowski and Witold Lutosławski. 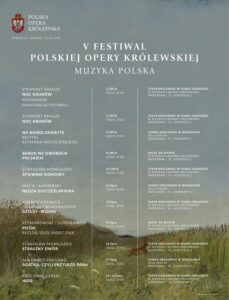