The rapid approach of the holidays and the New Year on the horizon must have motivated many of our friends to contribute a number of fascinating items to the Polish Music Center’s book and media libraries at the end of 2022. As always, we are delighted to be on the receiving end of such generosity and would like to acknowledge each donation with a few words of our heartfelt thanks. Many of these gifts were conveyed personally to Dir. Marek Zebrowski during his busy visit in Poland in late 2022. 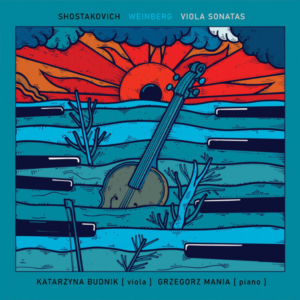 Pianist Grzegorz Mania, who also serves as President of the Society of Polish Chamber Musicians [SPMK] gave to us his latest CD recording featuring Viola Sonatas by Mieczysław Weinberg and Dmitri Shostakovich (SPMK 18 [please add direct link to recording]). He is assisted on this release by violist Katarzyna Budnik and the juxtaposition of works by Shostakovich and his close friend and neighbor, Mieczysław Weinberg—a Polish Jew who spent most of his life in Moscow—will prove very instructive for every listener. Interesting artwork and well-written notes in Polish and English complete this attractive presentation.

Wiesław Dąbrowski, Director of the International Paderewski Festival in Warsaw, donated to the Polish Music Center two fine items. The first, a DVD titled Ameryka Paderewskiemu [America for Paderewski], is a documentary with the highlights of the 2013 Paderewski Festival in Paso Robles. Directed by Mr. Dąbrowski who came with his filmmaking crew from Poland, the footage features concerts and other events accompanying this annual festival on California’s Central Coast.

The second item donated by Mr. Dąbrowski is a catalogue of the Ninth International Paderewski Festival in Warsaw that was held November 4-9, 2022. Mr. Dąbrowski, a longtime champion of Paderewski through his Ave Arte Foundation, has been organizing and running the Paderewski International Festival in Poland’s capital for almost a decade, bringing a wide range of artists and interesting programs for a variety of audiences. The 2022 edition offerings included, among others, concerts for young music lovers, a Paderewski-inspired jazz event, orchestral and operatic performances, as well as film screenings and lectures.

Krystyna Juszyńska, professor at the Chopin Music University in Warsaw, gave the PMC a bilingual Polish and English hardbound album dedicated to the virtuoso pianist, Piotr Paleczny. This attractive publication was issued in conjunction with Maestro Paleczny receiving an Honorary Doctorate following the April 6, 2022 decree issued by the Chopin Music University’s Senate. An extensive collection of biographical texts and illustrations, as well as the official reviews of Paleczny’s impressive artistic accomplishments by such notable figures in Polish piano school as Prof. Andrzej Jasiński and Maestro Krystian Zimerman, substantially add to the value of this book. Interviews with Piotr Paleczny as well as an introductory article by Chopin Music University’s President, Dr. Klaudiusz Baran, and a summary of Paleczny’s work as a longtime director of the Chopin Festival in Duszniki-Zdrój by musicologist Jan Popis further enhance this outstanding publication. 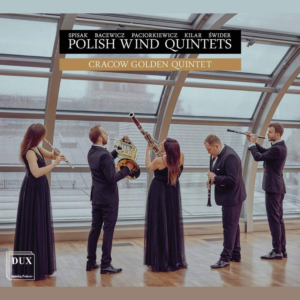 The Cracow Golden Quintet, a young group of artists who toured the United States in 2022, presented the Polish Music Center with two of their CDs after their concert at the Paderewski Festival in Paso Robles on November 4. Their DUX 1685 release features five wind quintets by contemporary Polish composers: Grażyna Bacewicz, Wojciech Kilar, Tadeusz Paciorkiewicz, Michał Spisak and Józef Świder. This rather unique recording not only presents repertoire rarely heard in live concerts, but also significantly contributes to its popularization by the group’s excellent musical delivery.

The other, also very interesting recording, is dedicated to musician Aleksander Dębicz and entitled Sideways, perhaps because it represents Dębicz’s branching out from his usual role as a pianist to that of the composer. His collaborators on this recording include Polish Soloists, a chamber string orchestra, and the aforementioned Cracow Golden Quintet.

Janusz Gauer—a distinguish Polish cinematographer who since the mid-1970s shot several feature films and literally thousands of episodes for various TV serials—presented the Polish Music Center with a very unusual gift. Szkoła kochanków is the Polish title for Mozart’s celebrated opera, Cosí fan tutte, which is presented in a 1987 film version directed by Krzysztof Tchórzewski with cinematography by Janusz Gauer. Sung in Polish, this production was inspired by the earlier, 1985 diploma presentation by students of the vocal and acting department at the Chopin Music Academy in Warsaw. The cast for this film version included Adam Kruszewski as Guglielmo, Joanna Kubaszewska as Despina, Agnieszka Kurowska as Fiordiligi, Beata Morawska as Dorabella, Jacek Parol as Ferrando, and Marek Stołowski as Don Alfonso. Their performance is accompanied by the Pomeranian Philharmonic in Bydgoszcz, led by Mieczysław Nowakowski and the Philharmonic’s resident Arion Choir.

What makes this film presentation of Mozart’s opera particularly interesting is the fact that the director and the cinematographer shot it on location at the Gołuchów Castle, a fortress dating from the mid-1500 and reconstructed during the 19th century in the French Renaissance style. This historical landmark is located about 70 miles southeast from Poznań, just north of the town of Kalisz. The palace interiors feature a variety of French and Spanish furniture and artwork from 17th through 19th centuries, while its extensive grounds covering over 300 acres include and English-style park and arboretum that are bisected by a small brook and a long and narrow pond. With such visually attractive interiors and exteriors, the cinematographer’s range of sets was practically unlimited. Consequently, the opera’s action was beautifully filmed. Some lovely scenes of a departing rowboat with lanterns sailing away at dusk, and setups of outdoor picnics received a luminous and tasteful treatment that’s pleasing to the eye. Director Krzysztof Tchórzewski adapted the Polish-language libretto by Zdzisław Ormicki into a script that shortened the standard three-hour complete production of Mozart’s Cosí to a more film-like 93 minutes. Fortunately, the main plot points with the attendant drama and suspense (followed by a happy end, of course) are still there for the viewer to enjoy.

The film that the PMC received from Janusz Gauer is a 2019 digital transfer made by the Wytwórnia Filmów Dokumentalnych [Documentary Production Company], with the cinematographer serving as the visual artistic coordinator and advisor. This project was also funded by Poland’s Ministry of Culture and National Heritage, European Union Regional Funds and Polish Film Institute.

Many thanks, as always! Dziękujemy!