The 2021 Paderewski Lecture-Recital honors the 25th death anniversary of Mieczysław Weinberg (1919- 1996)—an exceptionally prolific Polish-Jewish composer whose recognition, both during his lifetime and today, has been overshadowed by the turbulent times in which he lived. The event will begin with a video lecture by Weinberg expert and author, Danuta Gwizdalanka, and continue with live selections of Weinberg’s solo piano works and his Sonata No. 2 for Cello and Piano. The performers include pianists Grzegorz Mania and Piotr Różanski, and cellist Bartosz Koziak, all members of the Polish Chamber Musicians’ Association (PCMA).

This event is presented by the Polish Music Center at the University of Southern California, in cooperation with PCMA and the Consulate General of the Republic of Poland in Los Angeles. It is financed within the scope of the Multiannual Program INDEPENDENT 2017-2022, as part of the “Cultural Bridges” subsidy program of the Adam Mickiewicz Institute.

Born in Warsaw on 8 December 1919, Mieczysław Weinberg came from a family of artists. His father was a violinist, composer and conductor for the Yiddish theatre in Warsaw. Born in Odessa, Weinberg’s mother, Sonia Sztern, was an actress in several Yiddish theatres in Łódź and Warsaw. Already at the age of ten, Weinberg made his debut as a pianist and by 1931 he began to study piano at Warsaw Conservatory under Józef Turczyński. He graduated on the eve of World War II with two compositions, Berceuse for piano, Op. 1 and a string quartet, as well as highly promising prospects of studying with Józef Hofmann at the Curtis Institute of Music in Philadelphia.

When Nazis invaded Poland in September of 1939, Weinberg couldn’t travel to the U.S. and fled to the Soviet Union, where he continued studying composition with Vasily Zolotarev at the Minsk Conservatory. Two years later, in June 1941, Weinberg graduated just ahead of the Nazi advance on Soviet Russia and was evacuated to Tashkent. There he continued to compose and soon married Natalia Vovsi, a daughter of a famous Soviet Jewish actor, Solomon Mikhoels. In Tashkent, Weinberg also met Dmitry Shostakovich, who became a close friend and mentor and facilitated Weinberg’s move to Moscow in 1943. Meanwhile, Weinberg’s parents and sister left in Poland were interned in the Łódź Ghetto and perished in the Holocaust.

Weinberg’s early years in Moscow where he worked as a freelance composer and pianist brought a burst of creative output, with about thirty opus numbers completed between 1943 and 1948. Much of his music was subsequently criticized for “formalism” and “cosmopolitanism” – the latter a code word for Jewish influences – during the infamous 1948 Soviet Composers’ Union Congress. Weinberg, who never joined the Communist Party, also learnt at that time that his father-in-law, Solomon Mikhoels, was murdered on a street in Minsk on Stalin’s direct orders. Soon thereafter Soviet agents began to shadow Weinberg and try to link him to the so-called “Doctors’ Plot” against Stalin. Seven of the Kremlin’s nine doctors were Jewish, and one of those arrested, Miron Vovsi, was the uncle of Weinberg’s wife. By then Weinberg became the next target on the Soviet secret police list and was detained in January of 1953 on fabricated charges of attempting to set up a Jewish republic in the Crimea. Fortunately, Stalin died two months later and Weinberg was eventually released from prison and rehabilitated.

For the rest of his life Weinberg continued to live in Moscow, residing close to his friend Shostakovich. Both were excellent pianists and enjoyed performing in piano duets. Weinberg’s Symphony No. 12 (1976) is dedicated to Shostakovich’s memory and quotes from several of his earlier works. This musical symbiosis also worked the other way around, with Weinberg’s Symphony No. 7 inspiring Shostakovich’s String Quartet No. 10 and, thanks to Weinberg, Shostakovich also became interested in Jewish music. Other influences easily found in Weinberg’s music include traditional Polish folklore as well as quotes from Chopin, a strong imprint of Jewish and Yiddish melodies, and the musical language of Bartók, Mahler, Miaskovsky, Hindemith and Prokofiev. Generally speaking, Weinberg’s music operates within the realm of traditional tonal harmony with a strong sense of melodic development over often imitative contrapuntal textures.

Indisputably, Mieczysław Weinberg was an exceptionally prolific composer with over two dozen symphonies, seventeen string quartets, almost thirty sonatas for various chamber ensembles, two ballets and well over a hundred songs, many of them to poetry by Julian Tuwim as well as Adam Mickiewicz and Leopold Staff. Another chapter of Weinberg’s catalogue is film music—a total of 67 soundtracks—including the celebrated 1957 feature directed by Mikhail Kalatozov, The Cranes Are Flying. Also notable is Weinberg’s stage output that includes seven operas, the most famous of them The Passenger (1968), written to the libretto by Zofia Posmysz. It was this opera, presented finally in a concert version in Moscow in 2006 (the 1968 Bolshoi premiere was cancelled), that eventually led to more recent performances at the Bregenz Festival, Warsaw National Opera, English National Opera, Houston Grand Opera, Chicago Lyric Opera, and The Israeli Opera, among others.

Music of beauty and enormity… it is a perfect masterpiece… it is a hymn to humanity… to the international solidarity of those who, subjected to the most terrible evil, stood up against fascism.

–Dmitri Shostakovich about The Passenger

Universal admiration for The Passenger has ushered in a worldwide revival of Weinberg’s music, with leading orchestras programming his orchestral works and his chamber and solo music beginning to be performed and recorded. The astonishing neglect of this important composer can be perhaps attributed to the turbulent times in which he lived—coming into his own just as World War II began, becoming first a refugee from Nazi terror and later a victim of Soviet paranoia during the waning years of Stalin’s bloody reign. Until recently, Weinberg was totally absent from most musical reference sources or barely merited a short paragraph or two. Known as a modest human being who never promoted his compositions, Weinberg reflected on the somber character of his music by saying, “Many of my works are related to the theme of war. This, alas, was not my own choice. It was dictated by my fate, by the tragic fate of my relatives. I regard it as my moral duty to write about the war, about the horrors that befell mankind in our century.”

The performances of Weinberg’s piano and chamber music will be preceded by the 2021 Paderewski Lecture by Danuta Gwizdalanka, a distinguished musicologist who is universally considered the foremost Weinberg scholar in Poland. Her biography of the composer was published in Poznań in 2013 and new and updated editions of it will be published in Germany and Russia this fall. 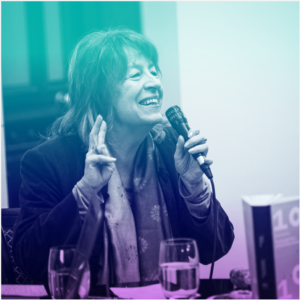 Born in Poznań, Danuta Gwizdalanka holds doctorate in musicology from Poznań University. For ten years she served as professor of music history at the Bydgoszcz Music Academy. She also guest-lectured at various universities throughout Europe and the United States and, since 1991, she has devoted herself exclusively to writing about music.

Gwizdalanka’s interest in the social aspects of musical culture brought about such titles as Muzyka i polityka [Music and Politics] in 1999 and Muzyka i płeć [Music and Gender] in 2001, the first such publication on this topic in Poland. In the field of chamber music, she published Przewodnik po muzyce kameralnej [A Guide to Chamber Music] in 1996 and Złoty wiek muzyki kameralnej [The Golden Age of Chamber Music] in Poznań in 2016.

Danuta Gwizdalanka also authored several textbooks on the history of European music from the Middle Ages until the present time for use in music schools. Published in 2020, her Symfonia na 444 głosów [A Symphony for 444 Voices] is an anthology of texts on various music-related subjects. Gwizdalanka’s One Hundred Years of Polish Music History was published in English in 2019.

Together with her husband, composer Krzysztof Meyer, Danuta Gwizdalanka has also authored several biographies, including a two-volume study on Witold Lutosławski (published in Kraków in 2003 and 2004 and in Germany in 2014), and an extensive biography of Dmitri Shostakovich that is scheduled for publication in 2023. Gwizdalanka’s book about Karol Szymanowski was published in Germany in 2017 and in 2021 in Poland. 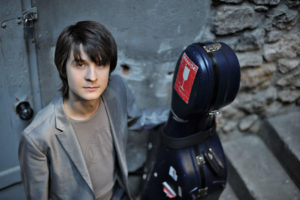 Also active as chamber musician, Koziak performs in a piano trio with the violinist Kaja Danczowska and pianist Justyna Danczowska and has for many years appeared in concert with pianist Agnieszka Kozło and violinist Anna Maria Staśkiewicz. In recent years Bartosz Koziak has been regularly invited to participate in Krzysztof Penderecki’s concert projects, including the first recording of the Concerto grosso conducted by the composer, and has made several recordings of Penderecki’s music for Polish Radio. A Magna cum laude alumnus of the Chopin Music University in Warsaw and of the Conservatoire National Superieur de Musique de Paris, Bartosz Koziak was granted a scholarship by the French government and was a participant in the Młoda Polska Program sponsored by the Polish Ministry of Culture. 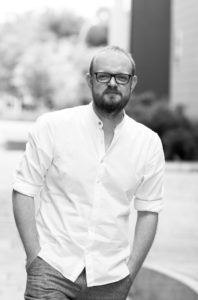 He works extensively as a recitalist, orchestral soloist and a chamber musician, and is a member of the Extra Sounds Ensemble. Maestro Mania recently recorded a CD for Munich’s Solo Musica with works by Corelli, Vivaldi, Schnittke and Kreisler. He appeared in international festivals throughout Poland, United Kingdom, France, Germany, Finland, Austria, Italy, Norway, Iceland, Vietnam, Israel, the United States of America, Cyprus, and the Ukraine and has been a finalist in a number of international solo and chamber competitions from 2002 to the present. 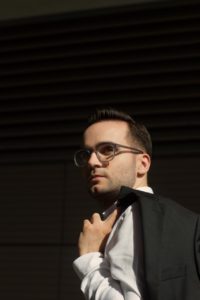 Piotr Różański is a top prize winner of international piano and chamber music competitions, including the 2006 Chopin National Piano Competition, the 2008 YAMAHA Foundation Scholarship Piano Competition, the 2010 Independent International Competition for Musical Individualities, as well as finalist in competitions in the United States, Slovakia and Austria. He has performed throughout Poland, Czech Republic, Cyprus, Switzerland, Finland, Germany, France, Great Britain, Lithuania, Ukraine, Israel and the United States. As a chamber musician, he has collaborated with many outstanding artists and performed at such noted festivals as Winners and Masters, Chopin and his Europe, The Łódź Philharmonic Premiere, Wawel at Dusk, Summer Music, Mozartiana, Music in Old Kraków, Emanations, Young Musicians’ Festival, International Chopin Piano Festival in Duszniki Zdrój, and the Ludwig van Beethoven Easter Festival.

Piotr Różański CD albums include Schumann & Prokofiew and Mieczysław Weinberg: Sonatas for Violin and Piano (recorded with Maria Sławek), as well as Poland for 4 Hands (recorded with Grzegorz Mania). He has lectured at international conferences in Kraków, Łódź, and Moscow, and authored articles on piano literature in addition to serving as editor of collective publications and a reviewer for the scientific journal, Contexts of Music Education. Różański’s interests include piano literature discoveries and pioneering performances of piano music for the left hand. He also collaborates with PWM Editions on new music publications, including editing piano works by Roman Ryterband, and a selection of duets for piano four hands. 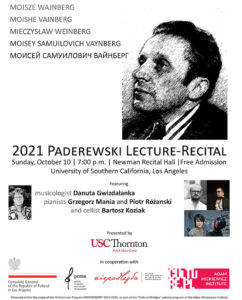