The double album of the cantatas Milda and Nijoła by Stanisław Moniuszko (DUX 1640/1641) and a new recording of the String Quartet No. 3 ‘…songs are sung’ and Sonata for Two Violins by Henryk M. Górecki (Naxos 8.574110) have made Gramophone magazine’s sought-after Best New Classical Albums list for the month of May. 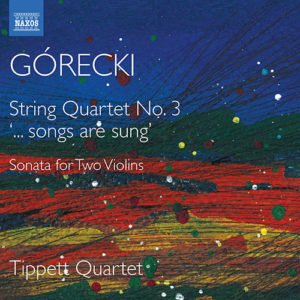 The Moniuszko cantatas were recorded by the Poznań Philharmonic Orchestra conducted by Łukasz Borowicz with the Opera and Philharmonic Choir directed by Violetta Bielecka and soloists Wioletta Chodowicz (soprano), Maria Jaskulska-Chrenowicz (soprano), Ewa Wolak (mezzosoprano), Sylwester Smulczyński (tenor), Robert Gierlach (baritone), Szymon Kobyliński (basso). Both cantatas refer to Lithuanian mythology and are based on Witolorauda—the first part of the Anafielas epic poem by Józef Ignacy Kraszewski, who also wrote the libretto for Milda. The premiere recordings of these cantatas were released on CD by the DUX label in October 2019.

The May list also includes the recording “Górecki – String Quartet No. 3 / Sonata for Two Violins” (Naxos 8.574110) as performed by the Tippett Quartet.  This release completes the Tippett Quartet’s recordings of the three string quartets by Henryk M. Górecki (1933–2010). It will be of considerable interest to all who are familiar with the Polish composer’s works since there are relatively few recordings available of the Third String Quartet (1995), which is a major late 20th-century masterpiece, while the earlier Sonata for Two Violins (1957) is an even greater rarity. The performances could not be in better hands—the Tippett Quartet’s recording of Górecki’s first two quartets (Naxos 8.573919) was widely acclaimed. The Strad described this earlier release as ‘Rich, dramatic performances that have the measure of a Polish master.’