The annual Paderewski Festival in Paso Robles was held November 5-9, 2014 in the charming Central Coast town that Ignacy Jan Paderewski once considered his second home in America. Paderewski’s legacy is still felt in the Paso Robles region, which has grown exponentially since Paderewski introduced large-scale Zinfandel and Petit Syrah wine production to this area. And like a modern manifestation of Paderewski’s artistic spirit, the Festival balances international music-making with local engagement and a deep understanding of the past with philanthropic hope for the future.

This year’s Festival began on a distinctly international note, with a Wednesday noon-time concert at Cass Winery performed by this year’s participants in the Cultural Exchange: Michał Niedbała and Paulina Ostrowska from Poland and Olha Pokhvata and Nazar Kozlyuk from the Ukraine. Although young Polish students had previously visited the Festival during even years (students from the Central Coast travel to Poland during odd years), this was the first year that the Board of the Paderewski Festival had the opportunity to invite Ukrainian participants. This new addition cements the three-way linkage between areas intimately tied to Paderewski: his American home on the Central Coast of California, his marital estate in the Tarnów region of Poland, and his birthplace in the former Podolia region of Poland which is now near Khmilnyk, Ukraine.

The inclusion of Ukrainian participants was a miracle of an opportunity for these students and their chaperone, Galia Terentieva, to escape temporarily from a war-torn country. Congresswoman Lois Capps who represents the Central Coast’s 24th District as well as various State Department employees and international music exchange experts helped to secure visas on time, and a groundswell of support from local California sponsors and organizers secured the funding necessary for their travel.

Joint effort by local and international partners not only benefitted the students but also brought rich rewards for the Festival’s audiences. The young pianists presented three different concerts over the course of the Festival—two in Paso Robles, and a third at the Mission San Luis Obispo de Tolosa, a new partner venue on the other side of the mountain range—and the content of their programs ranged from Baroque to modern composers from all over the world. Although some works were perhaps unfamiliar—such as the haunting Elegy in G-sharp minor by Ukrainian composer Yuriy Shchurovsky, or the contemporary Fly Free by English composer John Maul—the four young pianists from Poland and Ukraine shone in their heartfelt performances, and were warmly received by the local audiences. Read a full review at www.peninsulareviews.com. 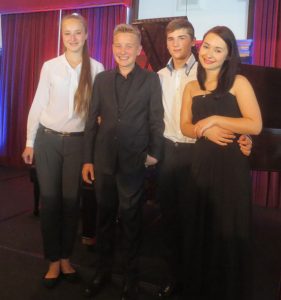 Thursday night’s concert at Cass Winery presented a more local flavor when the North County Chorus of Cuesta College, led by Director Cassandra Tarantino, performed a rousing program that mixed early Polish choral music with modern examples, and holiday music from around the world. Several talented members of the Chorus were highlighted in the middle section of the program—the Trio Amore joyfully presented Mozart and Kenneth Hand sang solo works by Dvořak and Hay. As it was Paderewski’s birthday, the evening closed out with the full Chorus back on stage for an enthusiastic rendition of Paderewski’s only work for choir, Hej, Orle biały! [Hey, White Eagle!], which earned the group and its leader a standing ovation.

On Friday night in the downtown Park Ballroom, the Festival again turned on its international spotlight when two of Poland’s most talented young musicians took the stage. Perhaps inspired by Paderewski’s own penchant for romantic rubato and virtuosic flair, violinist Mariusz Patyra and pianist Krzysztof Herdzin joined forces to present gems of the Romantic virtuoso literature by Paganini, Kreisler, and Wieniawski. Audience member and music philanthropist Charles Bragg said this of the experience: “The piano-violin duo was incredible, especially the violinist! I’ve rarely heard that kind of virtuosity, and I’ve heard a lot of musicians…” Each a musical powerhouse in his own right, the program was certainly geared towards highlighting the astounding skills of Patyra, who in 2001 became the only Polish violinist to win the First Prize in the prestigious Paganini International Violin Competition in Genoa, Italy. However Herdzin’s unquestionable talent shone through in even the most basic of accompaniments, and when he took over the piano to perform his solo Improvisation on Chopin’s Etude, Op. 10 no. 3, it was clear that his true talent lies in a very different but equally impressive realm of repertoire.

Following the last encore in what had seemed like an evening comprised completely of virtuosic encores, a crowd of both out-of-town and local audience members gathered to talk to the performers. The most common expression seemed to be one of awe-struck gratitude, as guest after guest thanked Patyra and Herdzin for bringing their beautiful artistry to Paso Robles. The outpouring was clearly taken to heart by the performers, who praised the generosity and hospitality shown to them during the Festival. 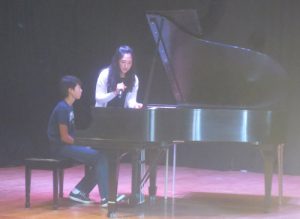 Saturday is always a full day of the Festival, and this year—with its particular focus on familiarizing Festival-goers with Polish culture and engaging the local community—was no exception. The schedule began at 10:00 am with a screening of Impromptu, a delightful 1991 feature film about Chopin’s life in Paris. This was followed by a noon-time dance performance in the Paso Robles Park Gazebo by the L.A.-based Krakusy Ensemble. Krakusy’s enthusiastic dance numbers were interspersed by historical and cultural background provided by Festival Artistic Director Marek Zebrowski and Krakusy choreographer Edward Hoffman. Details such as the origins of different rhythms or the meanings behind certain aspects of the dancers’ elaborate costumes provided a welcome context for the performance at hand as well as other Festival programs, which often feature dance and folk-inspired pieces of music. 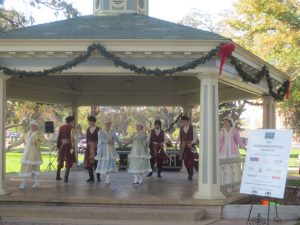 Traditionally, the highlight of the Festival Saturday is the afternoon concert of winners of the Youth Piano Competition. This concert is always free and open to the public and, as in past years, the Ballroom of the Paso Robles Inn was filled with families and friends of the young artists.

The Senior Division opened with Yuan Tao, a Third Place winner, who presented one of Paderewski’s Chants du Voyageur and Durand’s Etude.  Kannan Freyaldenhoven presented the opening movement of a Haydn Sonata and Paderewski’s celebrated Menuet, and the Youth Competition Winners’ concert came to a grand finale with Daniel Ha’s performance of Handel’s Chaconne with 21 Variations and Saint-Saëns’s bravura Allegro appassionato. Daniel, who last year won the Junior Division and participated in the Cultural Exchange Program in Poland, solidified his musical standing with an impressive First Place win this year in the Senior Category.

As soon as the young pianists finished their recital, the Elegant Evening celebrations began throughout downtown Paso Robles. This charming and unique tradition brings great crowds of revelers from places near and far to visit the shops and restaurants that open their storefronts and serve refreshments to the elegantly-clad public strolling by. The perambulating crowds are entertained by a variety of street performers, including dancers, musicians, magicians, and other entertainers who keep everybody—from the youngest kids to the most staid of adults—smiling throughout the night.

As the Elegant Evening’s events came to a close, the Paderewski Festival patrons gathered once again in the vestibule of the Paso Robles Inn Ballroom for a glass of wine before the Gala Concert. White wine varieties were provided by Cass Winery, a founding sponsor of the Festival, and the reds by Epoch Wines, the Gala Concert sponsor.

The featured performer for this year’s Gala was the young South Korean virtuoso, Zheeyoung Moon, winner of the First Prize at the 2013 International Paderewski Piano Competition in Bydgoszcz, Poland. Moon had already charmed the young Competition winners and visiting Exchange students with bubbly personality and excellent technical suggestions during her 2+ hour master class, held in the Park Ballroom the day before. However, it was her Gala performance that stunned the Festival audience. Editor-in-Chief of the Peninsula Review in Monterey and a Carmel-based piano teacher, Lyn Bronson perfectly captured the effect of Moon’s performance in his review, excerpted below:

Korean Pianist Zheeyoung Moon… exhibit[ed] astonishing levels of expressive and emotional intensity that constantly surprised us as she performed standard works we all know well and infused them with a freshness that made them seem new and exciting all over again.

Her technical mastery is equal to any pianist alive today, but what makes her playing so compelling is that it is not technique that is driving her, but rather her imaginative way of getting to the heart of the music and making it come alive. Her music making is quintessentially natural — nothing is done for gratuitous effect. In this era of the super virtuoso, who never met a fortissimo he didn’t like (or couldn’t play louder), Ms. Moon never produced an ugly sound, even while storming through the climaxes in the first movement of Chopin’s B-flat Minor Sonata or Liszt’s Rhapsodie espangole. 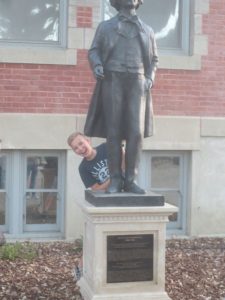 The 2014 Paderewski Festival concluded on Sunday morning just as it began a few days earlier—with a final recital by the young pianists from Poland and Ukraine. They presented a varied program of music by Mozart, Chopin, Liszt, Paderewski, Rachmaninoff, Gershwin, Poulenc, and others. A festive luncheon for the VIPs and the performers officially closed this year’s Festival. The following day the Ukrainian and Polish visitors with the chaperone decamped for Los Angeles where, serious work finally done, they could indulge in a little bit of sight-seeing. Driving down the Pacific Coast Highway, walking the streets of Hollywood, visiting Walt Disney Concert Hall and Downtown L.A. as well as enjoying a morning surfing lesson in Santa Monica rounded off their California sojourn. Paderewski would surely approve this mixture of music-making and cultural exploration, of forging lasting personal friendships that span generations and continents. Now it’s time to begin making plans for the next Paderewski Festival and the reciprocal visit of Central Coast youth in Paderewski’s Kąśna Dolna estate in Poland in 2015.