The 2022 Paderewski Lecture-Recital celebrates Hanna Kulenty (b. 1961), a brilliant contemporary composer who divides time between her native Poland, the Netherlands and France. With works commissioned and performed by renowned ensembles and musicians throughout Europe, Kulenty’s catalogue ranges from intimate solo explorations of form to large-scale triumphs of sound. Selected works, three of which are U.S. Premieres, will be performed at USC’s Newman Recital Hall on October 9 at 7 p.m. by the Thornton School of Music’s finest musicians, alongside a lecture by the composer about her oeuvre. Presented by the USC Polish Music Center, this event will offer a fascinating variety of works from across Kulenty’s compositional career, played by soloists and chamber ensembles.

The 2022 Paderewski Lecture-Recital is generously supported by POLAM Credit Union, the Modjeska Art and Culture Club and the Consulate General of the Republic of Poland in Los Angeles.

*US Premieres indicated with asterisk*

‘The Journey to Music Surrealistic’ – Lecture by Hanna Kulenty 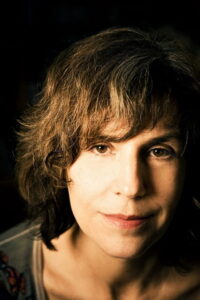 Born on 18 March 1961 in Białystok, Poland, Hanna Kulenty first studied composition with Włodzimierz Kotoński at the Chopin Music Academy in Warsaw (1980-1986) and then with Louis Andriessen at the Royal Conservatory of Music in The Hague (1986-1988). She also participated in composition summer courses in Kazimierz (Poland) and Darmstadt (Germany), where she attended lectures by Thomas Kessler, Witold Lutosławski, François Bernard Mâche and lannis Xenakis.

Since 1989, Kulenty has worked as a freelance composer and has received numerous commissions and scholarships. A prolific and versatile artist, Kulenty’s catalogue of compositions includes two operas, twelve large orchestral works, over sixty chamber and solo pieces, as well as film music. Throughout the 1990s and early 2000s, Kulenty was guest composer at the Berlin Artists Exchange Program and composer in-residence with Het Gelders Orchestra in the Netherlands. She has also lectured at the Other Minds 10 Festival in San Francisco and Soundstreams in Canada, and has served as guest professor at the Zwolle Conservatory in the Netherlands and the Music Academy in Barcelona. A recipient of many commissions and grants, Kulenty has taught composition courses in the Netherlands, Poland, Germany, and the United States. She also served on juries of the 1995 Munich Biennale, the 2002 Gaudeamus Music Week, the 2003-2004 Orpheus-Luciano Berio New Chamber Opera Competition, and the 2005 and 2007 International Competition for Contemporary Chamber Music in Kraków, Poland. 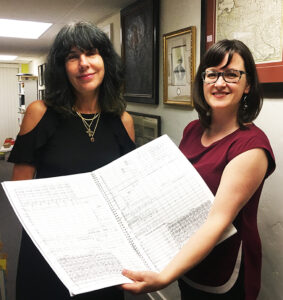 Hanna Kulenty’s compositions have been premiered at some of the most prestigious contemporary music festivals in Europe, including Huddersfield Festival, Schleswig-Holstein Musik Festival, Münchener Biennale, Warsaw Autumn, Musica Polonica Nova and the Netherlands Music Days. Kulenty’s symphonic music has been performed by orchestras in Holland, Denmark, Poland and Germany under such maestros as Peter Eötvös, Peter Hirsch, David Porcelijn, Ingo Metzmacher, Renato Rivolta, Antoni Wit, and Ronald Zollman. Soloists like Krzystof Bąkowski, Marco Blaauw, Elżbieta Chojnacka, Isabelle van Keulen, and Frank Peters and ensembles including de ereprijs and Kronos Quartet have performed and commissioned several of Kulenty’s works. Three of Kulenty’s original musical manuscripts, as well as a significant collection of her published materials, are housed in the Polish Music Center’s Manuscript Collection and Library in Los Angeles. Above, she is pictured making another deposit of scores with PMC Assistant Director Krysta Close, after a concert of her works held during the ‘Music at Rush Hour’ series at USC on September 27, 2017.

Kulenty’s opus has been recognized by several awards and prizes, including the European Young Composers’ Competition Prize for Ad Unum (1985), Poland’s Young Composers’ Competition Prize for Ride (1987), and the Polish Composers’ Union Prizes for Quinto (1986), Breathe (1987), Cannon (1988), and aaa TRE (1988). Her 2002 Trumpet Concerto won the First Prize at UNESCO’S 50th International Rostrum of Composers, and her chamber works Preludium, Postludium and Psalm (2007) and String Quartet No. 3 (2008) were selected as the best Dutch compositions of 2007 and 2008 during the ‘Toonzetters’ contest in Amsterdam.

Since 1992, Hanna Kulenty has divided her time between Warsaw, Arnhem in the Netherlands and Nice, France. Her compositions are published by Donemus (Netherlands) and PWM (Poland). 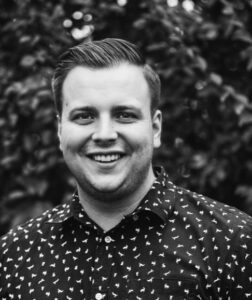 Active as a performer, composer, and educator, Logan Anderson is pursuing a Doctor of Musical Arts in trumpet performance at the USC Thornton School of Music. He previously served as Classical Music Director at Idaho Fine Arts Academy. He has performed as principal trumpet with the USC Thornton Symphony and BYU Philharmonic. He has also been a frequent performer with the Utah Symphony in Salt Lake City. Anderson lives in Culver City with his wife Lauren and daughters Eleanor and Adeline. 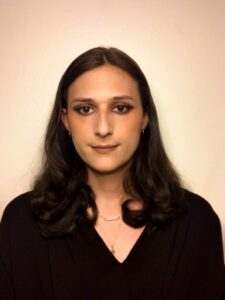 Hailing from Riverside, California, prize-winning saxophonist Frances Cisneros first debuted as a soloist with the Riverside Philharmonic in 2018. In addition, they have appeared as a soloist with USC Thornton Winds, Redlands Symphony Orchestra, and Music Academy of the West. As a champion of new music, both solo and chamber works, they have regularly collaborated with composers of renown. Having earned their Bachelor of Music degree from the USC Thornton School of Music, they are currently completing a Master of Music degree at USC as well. Their principal instructors include Dr. Jessica Maxfield and Professor Pat Posey. 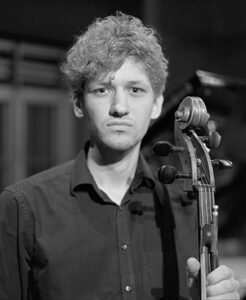 Paweł Czarakcziew is a cellist, chamber musician and pedagogue. He graduated with honors from the Cracow Music Academy in the class of Prof. Zdzisław Łapiński. He also honed his skills under the tutelage of Prof. Julius Berger at the Leopold-Mozart Zentrum in Augsburg. He is the laureate of many national and international competitions, and is currently at USC with a Fulbright Junior Research Award for 2022-23 under the supervision of Thornton interim Dean Joshua Kun. Czarakcziew has given concerts in Austria, China, Czech Republic, Denmark, France, Germany, Hungary, Norway, Slovakia, Spain, United Kingdom and the US, in addition to his native Poland. A dedicated collaborative artist, he is the co-founder of the Cracow Harp Quintet and the Czarakcziew/Kowal Duo. 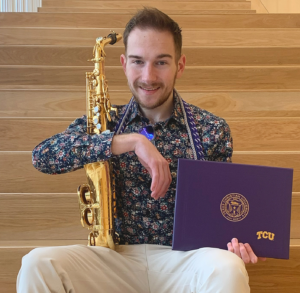 Saxophonist, pianist, and composer Wyatt Grose began his musical endeavors in the rural valleys of Southern West Virginia and has since brilliantly performed in various regions across the US. Grose’s musical interests include championing the art of classical saxophone performance and pedagogy through his original compositions and instructional methodology that aims to generate future performers who are well-supported emotionally as well as musically. Grose earned a Bachelor of Music Performance from Texas Christian University. He is currently pursuing his Master of Music Degree at the USC Thornton School of Music, under the tutelage of Dr. Jessica Maxfield. 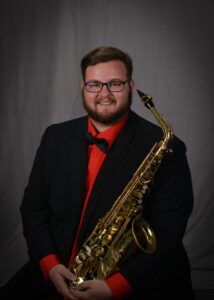 As one of Louisiana’s premiere saxophonists, Joshua Hebert has actively performed as a soloist and chamber musician throughout the Southern US, culminating a solo debut with the Southeastern Wind Symphony. A woodwind specialist, he has also successfully performed as a flutist and clarinetist. Currently active in musical fraternal life, Hebert serves as a member of Phi Mu Alpha Sinfonia and Kappa Kappa Psi. Joshua earned a Bachelor of Music Performance at Southeastern Louisiana University, where he studied with renowned saxophonist Brina Bourliea Faciane. Hebert is currently pursuing a Master of Music Performance degree in the USC Thornton School of Music, under the instruction of Dr. Jessica Maxfield. 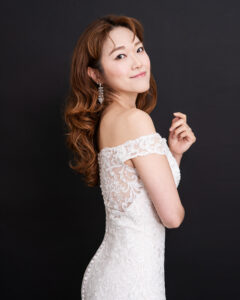 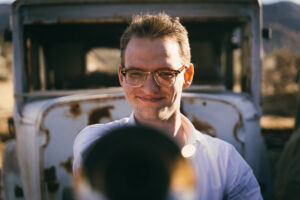 Svend Lykkegaard is a Danish-born trumpeter that has established himself in the Los Angeles brass community as an ensemble conductor and artistic leader, by creating both brass ensembles and a full-fledged weekly arts series. A seasoned soloist, orchestral and chamber musician, Lykkegaard has performed in both the US and Europe. Lykkegaard earned a Bachelor of Music in Trumpet Performance at the Royal Academy of Music in Aarhus (RAMA), Denmark, studying under professors Kristian Steenstrup, Reinholdt Friedich and Martin Schuster. Upon moving to the US in 2016, he earned a Master of Music in Trumpet Performance at the Cincinnati College-Conservatory of Music, studying under professors Alan Siebert and Philip Collins. He has since come to the USC Thornton School of Music, recently graduating with a Certificate in Trumpet Performance and accepting an offer to study a Doctorate in Musical Arts with professors Thomas Hooten (Principal Trumpet of the LA Phil) and Jennifer Marotta (a ‘President’s Own’ cornetist). 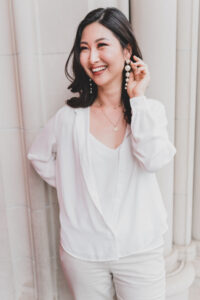 Steeped in musical tradition yet eager to forge new ways, Korean-American pianist Seoyon MacDonald enjoys a varied and innovative career. She is drawn equally to solo, orchestral, and collaborative music-making, and has appeared on concert stages in the US, Germany, Czech Republic, Hungary, Austria, and Korea. Recent highlights include performances in Weill Recital Hall and Stern Auditorium at Carnegie Hall, Wigmore Hall, and Alice Tully Hall at Lincoln Center. MacDonald’s musicological and entrepreneurial projects reach in many directions, recently including her debut as a Hollywood recording pianist, participating in scoring sessions of music by Kris Bowers for King Richard. She is currently at work on a book on the legacy of collaborative pianists in the US, and a digital recording of an unfinished Shostakovich prelude and fugue, recently reconstructed by Krzysztof Meyer. Along with her DMA degree in Keyboard Collaborative Arts at the USC Thornton School of Music, MacDonald is also studying the music industry with an eye to establishing music NFTs and virtual streaming business. 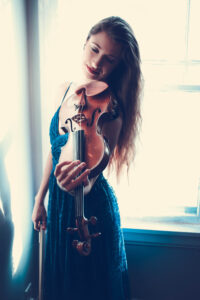 American violinist Madalyn Parnas Möller is an active soloist, recitalist, chamber musician, and educator residing in Los Angeles. Enthusiastically endorsed by the New York Times, Parnas Möller has concertized worldwide, most recently appearing as guest soloist with the London Philharmonic Orchestra. Alongside her sister, cellist Cicely Parnas, Duo Parnas was nominated for a Grammy Award in 2015, having released three albums on the Sheffield Lab label that feature both pre-existing works and commissions by award-winning composers of the 21st century. Her solo recording project with Aqua, an Argentinian/Latin American label, was distributed by Naxos in Summer 2021. Parnas Möller holds a M.M. and Artist Diploma from the Indiana University Jacobs School of Music, a M.A. from London’s Royal Academy of Music, and a B.S. from The College of Saint Rose where she graduated summa cum laude. In Fall 2022, she will receive her D.M.A. from the UCLA Herb Alpert School of Music where she currently serves as a Faculty Teaching Fellow. A 2012 Marshall Scholar, Parnas Möller was awarded the Josef Gingold Award and twice the Artistic Excellence Award at Indiana University. Her principal teachers include her grandfather, cellist Leslie Parnas, Mark Kaplan, György Pauk, Jaime Laredo, James Buswell, and Betty-Jean Hagen. Parnas Möller performs on a 1715 Alessandro Gagliano violin. 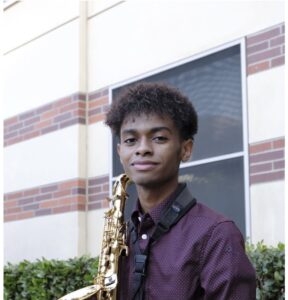 Originally from a musically accomplished family in Houston, Texas, saxophonist Christian Ross has extended his talents to Southern California as a Bachelor student of Music Performance at the USC Thornton School of Music. Entering his sophomore year, Ross has successfully performed in the capacity as a soloist and chamber musician. He is an active participant in the USC Thornton Winds ensemble and has appeared regularly with the renowned Scott Joplin Orchestra based in Houston. Ross’s instructors include Dr. Jessica Maxfield and Professor Pat Posey.