On April 17 we received a very special gift from a very special person. Precisely at noon, Diana Eisele arrived at Stonier Hall with a trunkful of boxes, cases, folders and framed artwork, all related to her late father—the distinguished composer, Roman Ryterband (1914-1979). Born to a family of lawyers and musicians in Łódź, Roman Ryterband studied music and law and made his first steps in establishing his musical career during the late 1930s. Ryterband was visiting France when World War II broke out and he just managed to reach Switzerland, where he spent the remainder of the war. There he began to compose in earnest, in addition to continuing his musical studies. For several years he studied musicology at the University at Bern, often appearing in concerts as choir and orchestral conductor. While living in Bern, he met a charming young Italian lady—Clarissa de Lazzari—and the two were married in February 1950. Their two daughters, Astrid and Diana, were born in Switzerland in the early 1950s.

By the mid-1950s, Ryterband had moved his family to Montreal, where he was appointed musical director of the CKVL Radio and invited to lecture at McGill University. During his sojourn in Canada, Ryterband also appeared in numerous piano recitals in Montreal. By 1960 the entire family moved to Chicago, where Ryterband continued to compose and perform as pianist, orchestra conductor and leader of a local Polish choral ensemble. He was also active as a teacher and widely-known as a tireless organizer of Chicago’s musical life.

Since 1967 the Ryterbands have lived in Palm Springs, California, where Roman founded and directed the Palm Springs Festival of Music and Art.  Dividing his time between composing and performing, in the late 1960s Ryterband was also on the faculty of California State University in Los Angeles. Although he died in Palm Springs in 1979 at the age of 65, his musical legacy has been valiantly carried on by his widow, Clarissa, and their two daughters. A few years after Ryterband’s death, two suitcases filled with manuscripts were donated by Clarissa and Astrid Ryterband to the Moldenhauer Archive, now held at the Houghton Library, Harvard University. Other institutions that received Ryterband’s music include the UCLA Libraries and Loeb Library at San Diego State University. The repository of the American Harp society received some of Ryterband’s harp compositions and Temple Sinai in Cathedral City, California, received two boxes of Jewish liturgical music written by Ryterband for various High Holidays services. 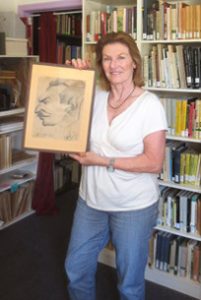 The exceptional gift Diana Eisele recently delivered to the Polish Music Center will give a new perspective on Roman Ryterband the composer, pianist, musical organizer and private person. Known until now mainly as an author of chamber music with a large number of excellent works for harp and harp-based ensembles, as a result of this donation, Ryterband can now be seen as a master of large-scale symphonic forms, choral and vocal music, as well as instrumental concertos and virtuoso solo piano works. The preliminary list of the music contained in the Ryterband Collection, as received on April 17, includes the following: 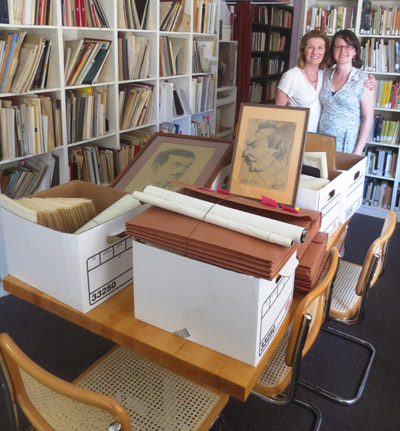 In addition, the materials donated on April 17 include several folders of correspondence to and from Roman Ryterband, photographs, concert programs and posters, newspaper reviews and clippings, magazines with articles about Roman Ryterband, certificates, testimonials, diplomas, artwork, and other documents relating to his career as a musician, composer, pianist, broadcaster, concert promoter and writer.

The donated materials will allow for a reassessment of Roman Ryterband’s contributions to the history of Polish music in the twentieth century. In addition, like the Paso Robles Collection of Paderewski Memorabilia, Bronisław Kaper Collection and Henryk Wars Collection before it, the Ryterband Collection will deepen our knowledge of the specific impact that Polish musicians have had on cultural life in California. In the coming months a detailed list of this first installment of the collection will be made and, once cataloged, will be made available online. As we begin the monumental task of logging every single item, we would like to express our profound gratitude to the composer’s widow, Clarissa Ryterband and to her daughter Astrid, both still living in Palm Springs. The Los Angeles family of Roman Ryterband—Diana and Robert Eisele—have done a wonderful job of sorting and organizing the donated materials in a particularly thorough and careful fashion. Their ongoing assistance and offer of time to help with the continued organization in the coming weeks and months are particularly appreciated. Testimonials from Clarissa Ryterband, describing the genesis and history of many of the Ryterband Collection’s items, will be of tremendous help to all students, researchers and performers interested in this composer’s music.

Further news and details of this donation will continue to appear in the upcoming issues of this Newsletter. Once again, on behalf of the Polish Music Center we want to thank the composer’s family for their unprecedented gift that will substantially enrich the range of unique materials in our library that are related to the history of Polish music. Dziękujemy!