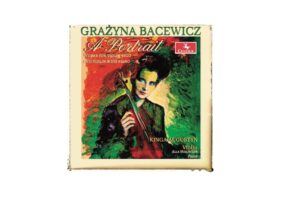 The month of August began with a parcel that arrived at the Polish Music Center from our friend and collaborator Kinga Augustyn, an award-winning Polish concert violinist based in New York. Her growing discography is now enriched by a new CD dedicated exclusively to Grażyna Bacewicz (1909-1969), a prolific composer as well as a virtuoso violinist and pianist.

Throughout the solo and chamber works on this recording, Augustyn’s impeccable musicianship and virtuoso vigor are on full display. The timbre is further enhanced by the 1774 Gagliano violin, with its incomparable range of penetrating sound, on which Augustyn plays. Milchtein’s well-balanced contributions to the violin and piano pairing on this disc makes for a very attractive presentation indeed. This Centaur Records release (CRC 3971) will be officially introduced to the public on September 9.

The Magic of Miłosz Magin 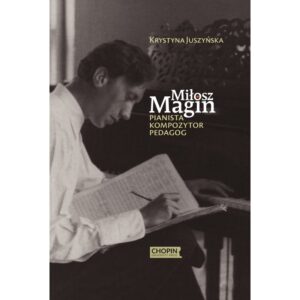 The extraordinary life and stellar career of pianist and composer Miłosz Magin are finally brought to public attention by a new and long overdue biography of this outstanding artist. The author, Dr. Krystyna Juszyńska, is on the faculty of theory and composition at the Chopin Music University in Warsaw. Published in Poland in 2019, Dr. Juszyńska’s thoroughly researched study reached the Polish Music Center recently. Besides shedding light on a little-known artist, Miłosz Magin—Pianista, Kompozytor, Pedagog, is greatly enhanced by the author’s close friendship with Magin’s family that enabled her to cover in great detail Magin’s rich and eventful life.

Born in Łódź in 1929, Magin showed a prodigious talent as a child, but the outbreak of World War II prevented him from attending music school and forced him to take private lessons instead. During the war his parents were deported to Germany and by 1944 Magin was also taken by the Nazis and forced to work in a German machine shop. When he returned to Łódź after the war, the orphaned and practically homeless 16-year-old Magin began to attend high school but soon dropped out to earn his living by playing piano in restaurants and cafes. He briefly crossed paths with a noted Polish pianist, Władysław Kędra, but financial difficulties prevented him from pursuing this path of development.

Moving to Warsaw in 1948, Magin first worked as accompanist at a private ballet school where he met his future wife, Idalia, who was one of the school’s dance students. Eventually, he came to the attention of professor Margerita Trombini-Kazuro, a distinguished pianist and daughter of the Italian conductor and musical director of Warsaw’s Teatr Wielki. Magin’s entrance exam to the Warsaw Conservatory—a recital of Chopin’s solo works—led to him becoming Trombini-Kazuro’s student and finally being able to learn piano in a systematic way. Magin also studied composition with Kazimierz Sikorski and Jan Maklakiewicz, and considered Maklakiewicz his friend and spiritual father. In 1957 Magin graduated from the Warsaw Conservatory with distinction in piano, composition and conducting.

Already by 1955 Magin was the public’s favorite for the top prize at the Chopin Piano Competition in Warsaw. Disappointingly, he was recognized only with the Honorable Mention but later that year he participated in the Marguerite Long-Jaques Thibaud Competition in Paris and received the Jury Prize. Returning to Paris for the same competition in 1957, Magin won the Sixth Prize there and was awarded the Third Prize at the Vianna da Motta Competition in Lisbon a few months later.

Encouraged by the enthusiastic public reception in Portugal, Magin and his wife decided to separately leave Poland in 1957 and settle in Sintra near Lisbon, as guests of Marquesa Olga de Cadaval. After living there for about three years, the Magin family moved to Paris in 1960 and once again faced a difficult financial situation. Although he was in still demand as a pianist, Magin could barely provide for his growing family that by now included two daughters, Ludmiła and Margot. His tiny flat in Paris had no space for an upright piano and Magin was forced to practice at a music school. Magin’s life became even more complicated in 1963, when he sustained serious injuries in a car accident.

Suspending concertizing for about five years, Magin turned to composition instead. When he finally regained his pianistic skills in the late 1960s, Magin began recording Chopin’s complete piano works for Decca label. This colossal project established Magin as a preeminent authority on Chopin, revitalized his concert career, and quickly attracted a number of very gifted students to his Paris studio. With his wife, Idalia (also a pianist who always supported her husband’s career), Magin founded the Miłosz Magin International Piano Competition in Paris in 1985. Held every two years, this competition seeks to promote emerging talents and piano works by Polish composers.

Magin died unexpectedly in 1999 during his concert tour on Tahiti. His considerable legacy of recordings testifies to great emotional range of expression, impeccable technique and beautiful sound, coupled with a strong sense of natural musical flow. As a composer, Magin left a sizeable portfolio of solo piano and chamber works, compositions for piano and orchestra, as well as a number of delightful piano miniatures for younger performers. Magin’s legacy as a pedagogue is equally significant with such talents as Jean-Marc Luisada and Caroline Sageman in France and Oliwia Różańska and Matylda Rotkiewicz in Poland, not to mention countless other pianists who participated in workshops and masterclasses Magin gave during the last two decades of his life.

Dr. Krystyna Juszyńska’s biography touches on every aspect of Magin’s life and career in great detail, adding new biographical information and discussing Magin’s concert career and repertoire, his style of playing and his extensive catalogue of recordings. A large section of Dr. Juszyńska’s book is devoted to the analysis of Magin’s compositions and his fascinating reconstruction of Chopin’s Mazurka in F minor, Op. 68. The history of the Magin Piano Competition and an entire chapter devoted to remembrances of Magin by his students and friends further enriches this fine publication. Many heretofore unpublished photographs, documents and scans of Magin’s manuscripts from the family archive pay due homage to this brilliant and still little-known artist.

This hardbound volume is a great read for any musician interested in this subject. Given the growing interest in Magin as pianist and composer, an English translation of Dr. Juszyńska’s book should be contemplated in the near future. For now, Polish speakers can find this volume at the website of the publisher, Chopin University Press. 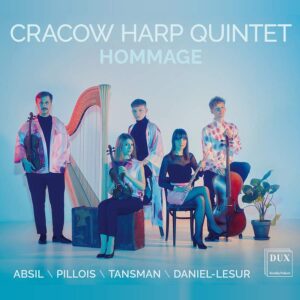 Written in 1952, Tansman’s Sonatina was commissioned by the Quintette Instrumental de l’Orchestre National de la Radio, to whom this work was dedicated. Composed of three movements (Introduction et allegro, Notturno, Scherzo-Molto vivace), the Sonatina da camera was world premiered on 17 November 1954 at the Théâtre Municipal in Cherbourg. It took another forty years for this composition to be published by Eschig and almost thirty years before the Polish recording premiere of the Sonatina was issued on this DUX release in May of 2022.

This recording was personally delivered on August 23 to the Polish Music Center by Cracow Harp Quintet’s cellist Paweł Czarakcziew, who had just arrived at USC on his Fulbright Scholarship. Congratulations to Paweł and to his chamber musicians alongside many thanks for introducing us to your musical discoveries!

The Accordion and The Polonaises 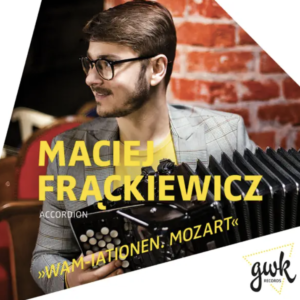 The other work on Frąckiewicz’s CD is Piotr Tabakiernik’s WAM-iationen, a 13-minute contemporary work that utilizes excerpts from Mozart’s compositions presented earlier on this recording. Thus, the “WAM” not only stands here for “Wolfgang Amadeus Mozart” but, as an onomatopoeia, gives the reader a good idea of the inimitable accordion sounds heard throughout this CD.

The other CD from Grzegorz Paluch features Julia Kociuban, one of the leading pianists of the young generation whose debut recording of works by Schuman, Chopin and Bacewicz was highly praised by the critics. For this DUX 1876 release, however, Ms. Kociuban took a different pianistic turn and recorded a thematically-fascinating compilation of Polonaises by various Polish composers.

The popularity of this Polish national dance was already evident in the Baroque era, with Bach and Telemann employing this genre on several occasions in their compositions. Polonaises became especially ubiquitous in Poland in the late 1700s and early 1800s, mainly due to the growing popularity of pianos. Just as importantly, in those politically difficult times (Poland was partitioned by her neighbors in 1795 and there were several armed uprisings against Russia and Germany), throughout the 19th century these Polish dances also became a de-facto expression of patriotic fervor and longing for independence.

Julia Kociuban’s survey of the Polonaise reaches back to Prince Michał Kleofas Ogiński (1765-1833) and includes his Polonaise in A minor as well as his Polonaise Les Adieux à la Patrie, an unassailable hit from the moment it appeared all the way to the present. Continuing in the patriotic vein, Polonaise Militaire à la Skrzynecki by Jan Kiszwalter (1787-1844) refers to the famous general and leader of the 1831 Uprising against the Russians.

Two Polonaises by Alfons Szczerbiński (1858-1895) harken back to the last days of the Polish Republic, with one of them commemorating the 3 May 1791 Polish Constitution (the second such document after the U.S. Constitution and the first in Europe).

Frederic Chopin, the undisputed prince of the polonaises, is represented by his three early works, written between 1817 and 1828 but published posthumously as Op. 71. These rarely-heard compositions nicely fit into the style brilliant of his predecessors featured on this recording.

The second half of the 19th century is represented by two great virtuosos, Juliusz Zarębski (1854-1885) and Ignacy Jan Paderewski (1860-1941). Zarębski makes an appearance on this recording in his Polonaise mélancolique, Op. 10, and Paderewski’s salon style is in evidence in his only Polonaise in B major, Op. 9. The final track on Kociuban’s CD is Polonaise triomphale, Op. 21 by Józef Wieniawski (1837-1912), the younger brother of the virtuoso violinist, Henryk Wieniawski (1835-1880).

On a slightly discordant note, it is rather unfortunate that one or two Polonaises by Maria Szymanowska (1789-1831) weren’t included in Ms. Kociuban’s recorded program. As a famous virtuoso and composer who toured Europe extensively, Szymanowska was an important link between late 18th century Polish composers (such as Ogiński , Elsner, and Kurpiński) and Chopin, who heard Szymanowska perform in Warsaw and was influenced as a young man by her Etudes, Mazurkas and Polonaises.

A sizeable essay on Polonaises in the program booklet written by cultural historian and music critic, Dr. Jakub Puchalski, provides much historical background for anyone who cares to further explore this quintessentially Polish genre and listen to Ms. Kociuban’s glittering and elegant interpretations. This fine CD was released by DUX in June of 2022.