Polish composer and conductor Krzysztof Penderecki (1933-2020) was one of the progenitors of avant-garde music of the 1960s. Creator of his own compositional idiom, “sonorism,” which became a hallmark of the so-called Polish School of Composition, he was an early recipient of the UNESCO International Rostrum of Composers Prize for Threnody to the Victims of Hiroshima (1961).

Recipient of hundreds of prizes (including five Grammy Awards), he achieved a rare balance between radical experimentation and an approach to classical music that struck a chord within popular culture. Conducting his own concerts, he had a unique ability to evoke emotional responses from his audiences and to convey messages of profound humanism. Throughout his career, Penderecki covered multiple musical mediums like symphony, opera, concerto, vocal and chamber works – producing masterpieces such as his Dies Irae (1967), Jutrznia (1970-71), and the opera The Devils of Loudun (1968-69). He was particularly drawn to religious music, and was the first modern composer to revive the form of the Passion with his 1966 St. Luke’s Passion. 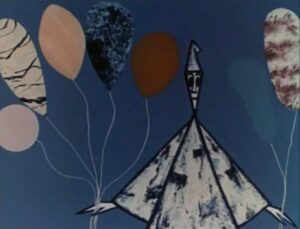 Penderecki’s music was embraced early on in the cinematic realm. He rarely composed directly for feature films, though there are exceptions. For instance, Penderecki composed the score for Wojciech Has’s The Saragossa Manuscript (1964) and The Codes (1964), as well as Alain Resnais’s Je t’aime, Je t’aime. His pre-existing compositions were often borrowed for film soundtracks, most famously appearing in William Friedkin’s The Exorcist (1973), Stanley Kubrick’s The Shining (1980), Jerzy Skolimowski’s Hands Up! (1981), Andrzej Wajda’s Katyn (2007), and Martin Scorsese’s Shutter Island (2010). More recently, Penderecki’s Threnody for the Victims of Hiroshima accompanied one of the most unforgettable scenes in David Lynch’s Twin Peaks: The Return (2017).

Most of the film music Penderecki composed came in the first phase of his career, and was written for short films in his native Poland. In the early 1960s, he began writing film music at the Polish Radio Experimental Studio together with Eugeniusz Rudnik, a sound engineer and pioneer of electronic music. Penderecki was reluctant to explore electronic music initially (supposedly due to a serious electrical shock some years earlier), but at Rudnik’s urging he began to embrace its potential, and their collaboration would result in some of the most extraordinary film music of the era.

Composing music for short films allowed Penderecki to test his ideas freely, on viewers who were not as skeptical as those he encountered in the classical music realm. The discoveries he made creating music with Rudnik in the “black room” of the Polish Radio Experimental Studio in Warsaw were later incorporated into Penderecki’s individual compositions, including Polymorphia (1961), a piece that opens Anthology’s film program, and Penderecki’s Second Cello Concerto (1974), the one that closes it.

on March 29, 2022, the Anthology Film Archives will hold a live screening of most of the short films that have utilized Penderecki’s music. The program includes those films incorporating Penderecki’s existing music, including PERSEFONA [Persephone] (2016, dir. Steph Twyford-Rigley) and BOLIMORPHY (2008, dir. Aneta Grzeszykowska), as well as those for which he composed original music, such as CZAR KÓŁEK [The Charm of the Two Wheels] (1966, dir. Kazimierz Urbański) and ARLEKIN [The Harlequin] (1960, dir. Mirosław Kijowicz). A still from this movie is shown above right.

Guest-curated by Adriana Prodeus, this program is co-presented with the Polish Cultural Institute New York, with special thanks to Tomek Smolarski. Total running time: ca. 80 minutes. 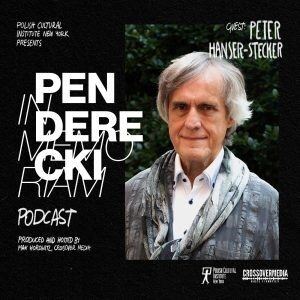 Publisher Peter Hanser-Strecker was born in Munich in 1942. He studied musicology and law in Mainz, Munich and Frankfurt. In 1968 he completed his law studies and received his PhD for his thesis on “Plagiarism in Music.” In the same year, he began working for Schott Music as head of the legal department. In 1974 he was appointed to the management board of the publishing house, which he has chaired since 1983.

Other podcast guests have included such major names in the music world as conductors Antoni Wit, Kent Nagano, JoAnn Falletta, and Łukasz Borowicz, composers Elliot Goldenthal and Laura Kaminsky, and many more. Find all episodes on standard podcasting platforms, as well as the PCI-NY YouTube channel.