It is clear that Polish composer Paweł Łukaszewski belongs to this company of titans… I found myself amazed at each subtle harmonic surprise, at each stunningly apt underlining of a phrase… Do not hesitate.

Composer and conductor Paweł Łukaszewski was born in 1968 into a family of musicians in Częstochowa, Poland. His compositions—especially his extensive catalogue of sacred choral music—has their roots in the neo-mediaeval tonality and spiritual tradition espoused by such composers as Henryk Mikołaj Górecki, Wojciech Kilar, Arvo Pärt, John Taverner and Morten Lauridsen.

Working within what the composer describes as a “renewed tonality,” Łukaszewski achieves surprisingly rich and subtle expressive results. The use of major and minor modes in Łukaszewski’s music serves only as a point of departure for his highly subjective musical style which, especially in the realm of vocal compositions, is inspired by texts he is setting to music. Łukaszewski’s highly individual musical language, rhythmic vitality, careful formal layout in all of his works, as well as his profound understanding of the liturgical texts in the Catholic rite combine to produce music that is strikingly traditional yet fully modern.

Several of Paweł Łukaszewski’s compositions will be heard at the 2011 Paderewski Lecture-Recital, an annual event presented by the Polish Music Center that features a modern Polish composer. This year’s Paderewski Lecture will take place on Thursday, October 6, 2011, at 7:30 p.m. at Newman Recital Hall on the USC Campus. The admission is free and open to the public. This event is co-sponsored by the Adam Mickiewicz Institute and the Consulate General of the Republic of Poland in Los Angeles.

The composer will be present at the concert and will speak to the audience about his music. His lecture will be followed by a performance of selected vocal and choral works.

Baritone Dan Gibbs (left) will present two songs for voice and piano based on poetry by Czesław Miłosz—the 1980 Nobel Prize for Literature laureate, whose centenary is being celebrated this year. The poems set by the composer include W mojej Ojczyźnie [In My Homeland] and Gdy wiatr powieje [When the Wind Blows], and the settings date from the year 2000.

Paweł Łukaszewski began his musical journey by studying cello in his native city of Częstochowa and graduating with distinction in 1987. He continued cello studies at the Warsaw Academy of Music and graduated with a diploma in 1992. Afterwards he studied composition with Professor Marian Borkowski in Warsaw and choral conducting with Ryszard Zimak at the Music Academy in Bydgoszcz. By 2007 Mr. Łukaszewski completed his doctorate in composition degree and currently he holds a title of professor at the Chopin University in Warsaw. Over the past decade Mr. Łukaszewski was invited as visiting professor to universities in Chile and Argentina, and has held a series of lectures in France, Germany, Spain, and Norway.

Mr. Łukaszewski’s compositions have been recognized with numerous awards and accolades, including the Tadeusz Baird Young Composers’ Competition, the Young Composers’ Forum in Kraków, the Warsaw Music Academy Competition, the Adam Didur Composers’ Competition, and the Florilege Vocal de Tours Competition in France. He was also given the Częstochowa City Award in 1995, was decorated with the Cavalier’s Cross of the Polonia Restituta Order in 1998, the Saint Albert Brother Award in 2006 and the Silver Gloria Artis Medal and Primate of Poland Award in 2011. Recordings of Mr. Łukaszewski’s works won the prestigious Fryderyk Awards in 1999, 2005, 2006, 2008, and 2011, and he has been named the City of Warsaw scholarship recipient in 2010.

Finding a wide appeal among the audiences and performers, Paweł Łukaszewski’s compositions have been heard at over one hundred festivals in Poland and abroad and recorded for over seventy different labels, including Hyperion, Acte Préalable, Polskie Nagrania, DUX, Musica Sacra Edition, and Signum Records. Over fifty of his compositions were published by Chester-Novello, PWM Kraków, Edition Ferrimontana, Edizioni Carrara, Lorenz Corporation, and Choris Mundi. Mr. Łukaszewski’s music was featured in performances throughout Europe as well as in Argentina, Chile, China, Israel, Cuba, Canada, South Korea, Peru, Uruguay and the United States.

Since 1995, Mr. Łukaszewski has served as the Secretary and the Program Director of the Laboratory for Contemporary Music International Festival, and since 2000 he has been president of the Musica Sacra Society. Mr. Łukaszewski is also a member of the ZAIKS Society and the Board of the Polish Recording Academy. He serves on the boards of international festivals, including the Gaude Mater Sacred Music Festival in Częstochowa, and as jury member for composition competitions in Arrezzo, Moscow, Bucharest, Katowice, Bydgoszcz, Legnica, Warsaw, and Częstochowa. In addition to his activities as composer, Mr. Łukaszewski directs the Cathedral Choir of the Warsaw-Praga and heads the Musica Sacra Publishing Company.

The month of October is known as “Polish Heritage Month” and is celebrated throughout the U.S.  Indeed, there were several interesting events during this month in Los Angeles celebrating Polish culture, with a particular emphasis on Polish music.

Paweł Łukaszewski—the most important Polish composer of liturgical and vocal music of his generation (and composer-in-residence for the Warsaw Philharmonic this season)—joined the Polish Music Center for the Paderewski Lecture-Recital at USC on October 6. Mr. Łukaszewski’s presentation at the Alfred Newman Recital Hall, entitled “The Composer’s Credo,” was richly illustrated with recorded musical examples and slides, detailing his approach to composition, the use of texts, and ways of settling on the formal design for his musical works. 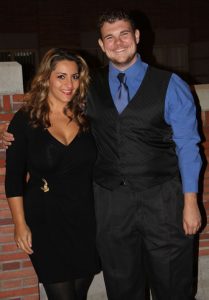 His lecture was followed by a concert of Mr. Łukaszewski’s music. It opened with baritone Dan Gibbs performing Two Songs to Words by Czesław Miłosz: Gdy wiatr powieje [When the Wind Blows] and W mojej ojczyźnie [In Homeland Mine]. Mr. Gibbs—currently enrolled in a Masters’ Program and studying with Rod Gilfry in the USC Thornton School of Music—gave a heartfelt and warmly-hued performance to Miłosz’s moving lines. Soprano Sewan Howsepian Salmasi—a doctoral student at Thornton in the studio of Elizabeth Hynes—delivered Łukaszewski’s finely-etched Four Haikus with innate musicianship and elegance. Both soloists acquitted themselves admirably in difficult Polish texts and were adroitly accompanied by Grace Chung, a student in Thornton Collaborative Arts program.

The remaining half of the program was devoted to Mr. Łukaszewski’s choral music. Led by conductor and Thornton faculty member, Professor Nick Strimple, the Vocal Ensemble of the Polish Music Center delivered a spectacular reading of O Adonai, Two Lenten Motets, and Angelus Domini. Under the experienced hand of Dr. Strimple, the sixteen-member chorus gave nuanced and sensitive renditions of O Adonai and the two Motets—Memento mei, Domine and Crucem tuam adoramus, Domine. For the final item on the program, Angelus Domini, Maestro Strimple and his singers summoned all of their energy and passion, giving a rousing finale to an evening of beautiful and deeply spiritual music.