The new 2021/2022 season of the Gorzów Philharmonic opened on September 24 with the music of Polish and Russian composers. Presenting extraordinary pictures, landscapes, stories and moods and expressing the great craftsmanship and imagination of each of the creators, works by Wars, Szymanowski, Mussorgsky and Stravinsky was presented by the Gorzów Philharmonic Orchestra under the baton of Przemysław Fiugajski. The violinist Anna Maria Staśkiewicz performed as the soloist. 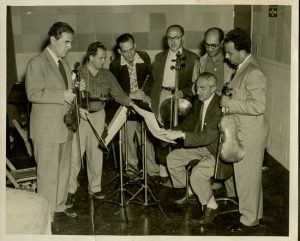 City Sketches were written when Henryk Wars was already living in America. This “jazzy” orchestral triptych, akin to Gershwin’s style, depicts the landscape of the American metropolis, enchanting with its incredible panache and freedom of instrumentation. The concert will include the first part of the suite – Skyscrapers. The manuscript for City Sketches, as well as other orchestral works written by Wars in the US, is held in the Henryk Wars Collection of the Polish Music Center archives.

Karol Szymanowski’s Violin Concerto No. 2 includes echoes of Poland’s Podhale region and highlander music. The work, which eludes all known harmonic, color or formal patterns, hypnotized Europe musical community of the first half of the 20th century. Szymanowski’s friend, violinist Paweł Kochański—the first performer of the solo part and the author of the cadence—persuaded the composer to write the concerto.

Sabrina Stachel, a participant of the “Conductor-in-residence” program run by the National Institute of Music and Dance and financed by the Minister of Culture, National Heritage and Sport, participated in the preparation of the concert.