In Memory of Roman Ryterband
A Forgotten Resident of Łódź – Composer, Pianist and Educator
Born in Łódź in 1914 – Died in Palm Springs in 1979

The International Conference “Roman Ryterband as an heir and advocate of Polish musical traditions in the United States” took place at the Łódź Music Academy on November 30, 2019. The program included a concert, scholarly presentations and the unveiling of a memorial plaque. Watch a video report of the unveiling here: tvtoya.pl/news/show/23606.

This was the first such event in Poland devoted to the life and music of Roman Ryterband—composer, pianist, conductor and music educator. Born in Łódź 105 years ago in 1914, Ryterband was a world citizen who died in Palm Springs, California, in 1979. Living outside Poland after 1939, he successfully developed his artistic career, residing, in turn, in Switzerland, Canada and, for almost 20 years, in the United States. Nonetheless, he did not neglect his links to Polish culture and traditions, as witnessed by his activities as artist and promoter, as well as by his music that is inspired by Polish history and folklore.

Ryterband’s musical career began in Łódź; he wrote his first composition there while still a teenager. He studied music at the Helena Kijeńska-Dobkiewiczowa Music Academy and, before the war, had worked for Łódź Radio and collaborated with local theatres. The first concerts featuring his works were also held in Łódź.

The goals of this international Conference are to rediscover and return Roman Ryterband’s rich musical opus to Polish audiences who, during the composer’s life and after his death, had no chance to hear it in Poland. 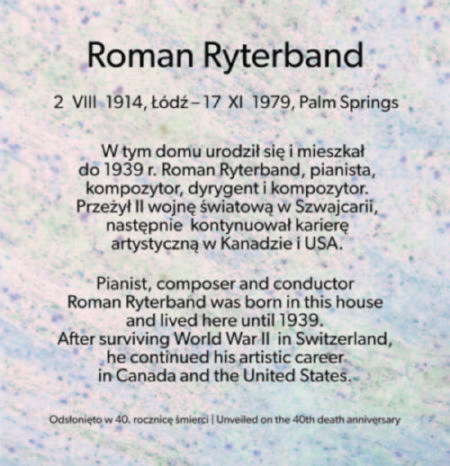 A plaque commemorating Roman Ryterband was officially unveiled on Friday, November 29, at the composer’s birthplace on Narutowicza 40.