With great sadness we announce the sudden passing of Joanna Bruzdowicz on November 3, 2021 at her home in the French Pyrenees. She was 78.

Born in Warsaw on 17 May 1943, Joanna Bruzdowicz was a child prodigy, who began to compose at the age of six. She studied composition with Kazimierz Sikorski and piano with Irena Protasiewicz and Wanda Osakiewicz at the State Higher School of Music in Warsaw, where she received her M.A. in 1966. Shortly thereafter Bruzdowicz travelled on a scholarship from the French government to study with Nadia Boulanger, Oliver Messiaen and Pierre Schaeffer. While in Paris, she joined the electro-acoustic Groupe de Recherches Musicales and wrote her doctoral thesis, Mathematics and Logic in Contemporary Music at the Sorbonne. After first settling in Belgium, Joanna Bruzdowicz later moved to France and for many years lived in her mountainside residence in southern France.

Bruzdowicz’s catalogue of compositions includes several operas, ballets, symphonic and chamber music, works for children, and numerous soundtracks for film and television. Her music has been praised for its “poetic palette of sound” and for being “ultramodern and refined” while remaining expressive and personal. Bruzdowicz’s Stabat Mater written in 1993 for a special ceremony held at Forest Lawn Memorial in Glendale, California, was attended by city and county representatives, members of the Polish government, and over one thousand guests.

In 2001 Bruzdowicz received the highest distinction from the Polish government, the Order of Polonia Restituta, for her contribution to Polish culture that included producing radio programs for broadcasters in France, Germany, Belgium, Italy, Spain and the United States. Active as music critic and guest lecturer in composition around the world, Maestra Bruzdowicz was also a recipient of numerous commissions, including the Bastia Opera in Corsica, where her large-scale work, Lella—Oratorio Profane was world-premiered in November of 2011. Bruzdowicz was a co-founder of various musical organizations, including the Chopin and Szymanowski Association in Belgium, Jeunesses Musicales in Poland, GIMEP in France. She was also recognized by the Ministry of Culture in Poland with the Gloria Artis Merit for Culture medal in 2013 and with the 2019 Honorary Award by the Polish Composers’ Union for her promotion of Polish music abroad.

Bruzdowicz also had a longstanding creative partnership with the legendary French film director and early nouvelle vague pioneer, Agnès Varda. Bruzdowicz’s film scores added greatly to such iconic Varda pictures as Sans Toit Ni Loi (also known as Vagabond and awarded the Golden Lion in Venice in 1985) or Les Glaneurs et la Glaneuse, her multiple award-winning documentary. Varda and Bruzdowicz teamed up for the last time for Varda by Agnès, released shortly before Varda’s death in 2019. 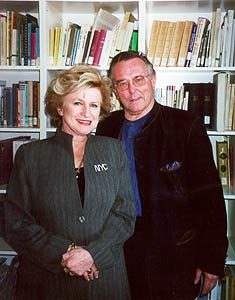 Together with her husband, Horst-Jürgen Tittel (pictured at right at the PMC), Bruzdowicz created the long-running German TV series Stahlkammer Zürich for which she composed over 15 hours of music. She also collaborated with her son, Jörg Tittel, and daughter-in-law, Alex Helfrecht, both on stage and on screen, including a score for their first feature, The White King (2016) starring Jonathan Pryce. Overall, Bruzdowicz’s film scores include a total of over 30 hours of music, much of it recorded with her favorite musicians in Poland.

Joanna Bruzdowicz was also the founder and artistic director of the Festival International de Musique en Catalogne in Céret, a charming town in southwestern France long favored by such artists as Georges Braque, Aristide Maillol, Pablo Picasso, Chaim Soutine, Déodat de Séverac, and Harold Weston, among others. In well over two decades of running this festival, Bruzdowicz featured a great deal of Polish artists and also invited local artists to participate in live painting sessions during concerts, as well as discussions and jam sessions in various cafes and clubs around town. Her strong and sustained advocacy for the arts and culture made Bruzdowicz quite a celebrity in the region and a considerable force in local politics when she briefly served on the community council in Taillet.

Joanna Bruzdowicz’s connection to the Polish Music Center dates back to 2003, when she was featured at the 2nd annual Paderewski Lecture-Recital, held in Bing Theatre on the USC campus. On that occasion, Maestra Bruzdowicz spoke of her music and ideas that inspired her compositions, illustrating her lecture with excerpts of recordings, including the Concerto for Double Bass, Cello Concerto, and Stabat Mater, a choral work commissioned for the unveiling of the restored version of Styka’s Crucifixion panorama at the Forest Lawn Memorial in Glendale. This choral work was dedicated to the founder of the Polish Music Center, Wanda Wilk.

An avid world traveler, Bruzdowicz visited the Polish Music Center again in October of 2005. She returned in March of 2012 for a Festival of Premieres concert, where her Erotiques pour piano were performed. Bruzdowicz’s last visit in Los Angeles was in March of 2015 when she participated in the “Measures and Frames” concert, as part of USC’s prestigious “Visions and Voices” series.

Manuscripts of four of Joanna Bruzdowicz’s works—Trio dei Due Mondi, Tre Contre Tre, Piano Concerto, and Marlos Grosso Brasileiras—were donated to the Polish Music Center by the composer in 1986 and 2003. These are held in the PMC’s Manuscript Collection.

Ravel’s famous quote, “The only love affair I have ever had was with music,” also sums up Joanna Bruzdowicz’s life in music. It was her love at first hearing when, in the now remote late 1940s, she touched the 1867 Kerntopf upright piano belonging to her aunt, the world-famous soprano Maryla Karwowska. This instrument was a family heirloom that Paderewski had played on decades earlier. It was her love when, unbridled from studies and conventions that had to be mastered first, she could finally embark on her own journey of musical discovery. It was her love when, surrounded by the wild Pyrenees and alone in her stone cottage studio, she was free to pursue her innermost passion and let her rich imagination roam free.