“somewhere very else …” – The Polish-Lithuanian Connection

The Polish Music Center at the USC Thornton School of Music will present a two day Festival of Premieres with concerts on Friday March 23 and Saturday March 24, held in the Alfred Newman Recital Hall on the USC campus. World premieres of UN-intermezzi (2012) for piano by Veronika Krausas and Five Piano Preludes (2000) by Marek Żebrowski as well as California premiere of Pasaka by Vykintas Baltakas are featured on March 23 during a USC Thornton Faculty Recital by pianist Aron Kallay celebrating Polish and Lithuanian composers. The PMC’s Festival of Premieres will continue with the “Imaginary Variations & Beyond” concert on Saturday, March 24, performed by violinist Janet Packer and pianist Anthony Padilla, and will feature the California premiere of Imaginary Variations by Krzysztof Meyer.

The PMC Festival of Premieres seeks to explore the contemporary cultural landscape of Poland and its eastern neighbor, Lithuania. The two countries have shared a long common history, beginning with the Union of Lublin Treaty in 1569 that joined Poland and the Grand Duchy of Lithuania into a Commonwealth administered by a Polish monarch. This innovative political concept featured strict controls on the powers of the crown, guarantees of religious tolerance enshrined in the Warsaw Confederation Act of 1573, and high levels of ethnic diversity on the Commonwealth’s territory which was the largest political entity in Europe at that time. The nineteenth century partitions and the spell of Communist government during the twentieth century finally gave way to independent Poland and Lithuania in the late 1980s. Since then both countries began to flourish under democratically elected governments and became active members of the European Union. By presenting premieres of works by contemporary composers from both countries, this Festival celebrates the cultural bonds that exist in the region to this day. 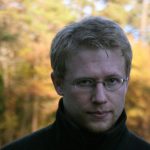 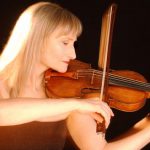 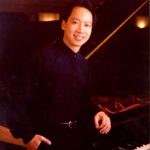 The two concerts of the Festival of Premieres will feature three distinguished performers: violin virtuoso Janet Packer and pianists Aron Kallay and Anthony Padilla. Violinist Janet Packer has appeared in concerts throughout the world, recorded solo violin, violin and piano, and violin and orchestra works for the CRI and MMC labels, chaired the Longy School of Music String Department for twelve years, and has given frequent master classes at music conservatories and universities worldwide. Dr. Kallay is a pianist and composer who champions contemporary and microtonal music, and music that combines electronics with acoustic instruments. He is a member of the faculty of the USC Thornton School of Music and Chapman University. Anthony Padilla is a prizewinner of the Concert Artists Guild, Gina Bachauer, William Kapell and Walter Naumburg International Piano competitions. He has been professor of piano and chamber music at the Lawrence Conservatory since 1997 and Artist-in-Residence at the Bay View Music Festival since 1995. 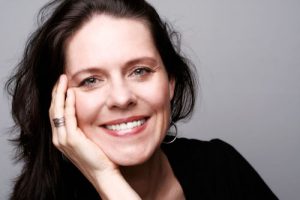 The Friday night program of premieres will include music by Vykintas Baltakas, whose 1997 Pasaka uses Lithuanian texts that, according to the composer, will “… distance the audience from the narrative, so that they could use their fantasy andlisten to the musical act.” Veronika Krausas [pictured at right], an Assistant Professor in the Composition Department and the Assistant Director of Undergraduate Theory at the USC Thornton School of Music, was inspired to write her latest piano composition by the novel Un-Lun Dun by the English writer, China Miéville. Krausas’s UN-intermezzi for Piano reflect, in the composer’s own words, “the floating quality of Brahms’s Intermezzo Op. 119, no. 1 […] the Gigue from Bach’s Partita in B-flat Major, and […] pay homage to the whimsical style of Erik Satie.” PMC Director and composer Marek Żebrowski describes his Five Piano Preludes, which will also recieve their premiere, as “positioned somewhere between a suite and a group of etudes that explore various technical and musical aspects of piano playing.”

Keeping to a theme of music from the lands of former Commonwealth of Poland and Lithuania, Henryk Mikołaj Górecki’s Piano Sonata (composed in 1956, revised in 1990), Joanna Bruzdowicz’s Erotiques pour piano (1966), and Five Character Pieces by Mikalojus Konstantinas Čiurlionis will round off Dr. Kallay’s evening fare of fascinating piano literature.

The highlight of the Saturday afternoon concert will undoubtedly be the California premieres of a new work by Polish composer Krzysztof Meyer [pictured at left]. Completed in 2010 Meyer’s Imaginary Variations for violin and piano was commissioned by Janet Packer with funding from the Pro Violino Foundation, Inc., and premiered by Ms. Packer in November 2011 at the Consulate General of the Republic of Poland in Chicago. Commenting on his composition, Mr. Meyer stated that,”…the Imaginary Variations owes its existence to the beautiful recordings made by Janet Packer that I listened to with great pleasure before embarking on my task of composing the work.”

With its two springtime concerts, the Festival of Premieres celebrates the history of concerts in noble residences and royal castles of Warsaw and Vilnius, where music from all corners of Europe resonated happily for centuries. By presenting programs of new and old music by contemporary Polish and Lithuanian composers, the Polish Music Center wishes to remind its audience of the longstanding cultural bonds linking the two nations. Admission to the “The Polish-Lithuanian Connection” Friday evening concert and to the Saturday afternoon’s “Imaginary Variations and Beyond” is free and open to the public and we hope it will prove a memorable experience.

Polish Music On The USC Campus 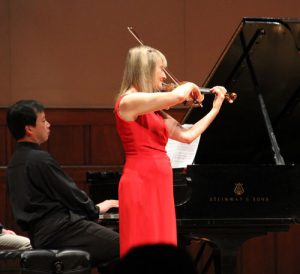 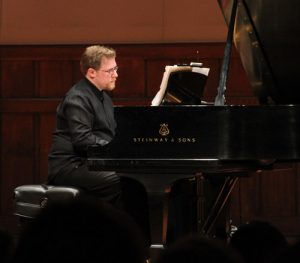 The weekend of March 23-25, 2012 brought Polish music to USC’s Alfred Newman Recital Hall. The first event was the Polish Music Center’s Festival of Premieres, featuring three talented musicians—Aron Kallay – piano (above left), Janet Packer – violin and Anthony Padilla – piano (above right)— presenting several world and California premieres. As an added bonus, on Sunday a recital performance was given by Angela Cholykan, who in 2010 performed for the PMC’s Chopin Marathon.

According to Marek Żebrowski, Program Director of the Polish Music Center at the USC Thornton School of Music:

The two-day Festival…seeks to explore the contemporary cultural landscape of Poland and its eastern neighbor, Lithuania. The two countries have shared a long common history, beginning with the Union of Lublin Treaty in 1569 that joined Poland and the Grand Duchy of Lithuania into a Commonwealth administered by a Polish monarch. This innovative political concept featured strict controls on the powers of the crown, guarantees of religious tolerance enshrined in the Warsaw Confederation Act of 1573, and high levels of ethnic diversity on the Commonwealth’s territory, which was the largest political entity in Europe at that time.…

Celebrating the past and looking forward towards the common future, the Festival of Premieres spotlights the history of concerts in noble residences and royal castles of Warsaw and Vilnius, where music from all corners of Europe resonated happily for centuries. By featuring premieres by both Polish and Lithuanian composers, the Polish Music Center wishes to remind its audience of the cultural bonds linking Poland and Lithuania.

With this historical context provided in the welcome, the audience was better able to appreciate the musical developments achieved by these composers and the significance of their works.

The Friday evening concert began with the world premiere of Marek Żebrowski’s Five Piano Preludes (2000) and the California Premiere of Vykintas Baltakas’ Pasaka. These were followed by Mikalojus Konstantinas Čiurlionis’ Five Charachter Pieces, Henryk Mikołaj Górecki’s Piano Sonata, No. 1, Op. 6, and Joanna Bruzdowicz’s Erotiques pour piano (1966). Friday night’s performance ended with the world premiere of Veronika Krausas’ UN-intermezzi (2102), from which the title of the evening’s program—”somewhere very else…”—took its inspiration. After the concert, accolades were bestowed on composers Bruzdowicz and Krausas who were in the audience, as well as pianist Aron Kallay, who presented the challenging and varied program with seeming ease. A lovely reception co-sponsored by the Helena Modjeska Art and Culture Club followed the program, offering a chance for audience members to mingle with the artists.

On Saturday, March 24, the second concert of the Festival—entitled “Imaginary Variations & Beyond”—featured the California premiere of Krzysztof  Meyer’s Imaginary Variations, op. 114 (2010), a strikingly challenging new work for violin and piano which Janet Packer and Anthony Padilla performed with great energy and focus. The evening also included the Sonata for Violin and Piano (1917) by Claude Debussy, and concluded with the Violin Concerto No. 2 in D Minor, Op. 22 (1862) and Capriccio-Valse in E Major, Op. 7 (1852) of Henryk Wieniawski.

On Sunday, March 25, Angela Cholykan presented her final Artist Diploma recital concert performance at USC offering us choice concert pieces by Chopin and other composers.  The audience was in heaven with Chopin’s Prelude Op. 45 in C minor as well as his Andante Spianato & Grande Polonaise Brilliante together with those works by Russian and German composers Scriabin, Tchaikovsky, Beethoven and Bach.

This special weekend highlighted the superb talents of Thornton professors and students, as well as creators and performers of Polish music from around the world. The Festival was a welcome addition to the USC PMC repertoire of annual concert programs, which also include the Annual Paderewski Lecture-Recital at USC.

Gary Fitelberg is a musicologist, music critic and historian.