From Krzysztof Olczak, our good friend and Professor at the Gdańsk Music Academy, we received two CDs featuring music for accordion and various chamber ensembles. The first, Krzysztof Olczak—Solo and Chamber Music for Accordion (Dux 1598) features solo accordion works alongside pieces for voice and accordion (or two accordions), accordion, guitar and violin, as well as accordion and percussion. 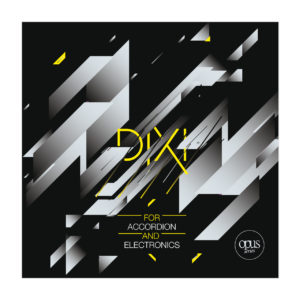 The other CD, Dixi for Accordion and Electronics (Opus Series 44|2019), features compositions by Wiesław Cienciała, Christos Hatis, Andrzej Krzanowski, Lary Lake, Dariusz Mazurkowski, Krzysztof Olczak and Eugeniusz Rudnik. These CDs were hand delivered to us by guitarist Bartosz Paprot, who was visiting PMC recently in connection with his travels in Southern California. 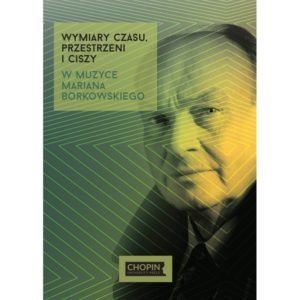 Another great friend of the Polish Music Center, Professor Marian Borkowski, had sent us a new book, Wymiary czasu, przestrzeni i ciszy w muzyce Mariana Borkowskiego [The Dimensions of Time, Space and Silence in Marian Borkowski’s Music]. This extensive and very presentable volume published by Chopin University Press contains fifteen sizeable essays on various aspects of Marian Borkowski’s music. Adding this book to our library will enable students, faculty and all kinds of researchers from this part of the world more access to analyses of Professor Borkowski’s music. As always, we are very grateful for such an important donation that also came with a beautiful handwritten dedication by Prof. Borkowski.

At the very end of December, musicologist and research specialist at the National Chopin Institute (NIFC) in Warsaw Ewa Bogula returned to the Polish Music Center. The purpose of her visit was to dig deeper into the Stojowski Collection, which she had previously overviewed for her institution, in order to determine if there might be opportunities for publication collaboration. While at the PMC, Ms. Bogula also added several important recordings and journals to our library collections. From the CD catalog of NIFC, the following recordings were donated “Moniuszko. Halka” performed by Europa Galante, Fabio Biondi and the Podlasie Opera and Philharmonic Choir (NIFCCD 082-083, 2019); “Chopin. Etudes Op. 10&25” performed by Krzysztof Jabłoński (NIFCCD 215, 2016); and “Paderewski, Martucci” performed by Nelson Goerner and Jacek Kaspszyk (NIFCCD 044, 2015). She also brought several copies of journals published by NIFC, including Studia Chopinowskie (2019 issue 1 and 2018 issue 2) and The Chopin Review (2019 issue 2).

An incredibly interesting gift came to us very recently via Dr. Ewa Damska-Muchick, a longtime PMC friend and generous donor. Dr. Muchnick and her parents were close friends of Bronisław Kaper and frequent visitors at his hospitable home (Dr. Muchnick’s mother is pictured, L, with Kaper and another family member). She brought us two very rare books from Kaper’s personal library. One is Kochanek Wielkiej Niedźwiedzicy [The Lover of the Great Bear Constellation] by Sergiusz Piasecki, published by Gryf Publishers in London in 1947. First published in Poland in 1937, this book is a kind of personal memoir of smugglers that plied the Polish-Soviet border in the 1920s. It offers a fascinating look at the little-known activities of crossing a dangerous border between two political adversaries. Piasecki’s book was highly praised by the literary circles in Poland before WW II and by the émigré Poles after 1945. 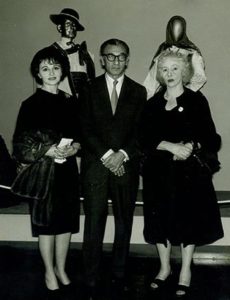 The other book donated by Dr. Muchnick is Wiersze zebrane [Collected Poems] by Antoni Słonimski, published in Warsaw in 1929. This volume of poetry bears a handwritten dedication “Miłym Kaperom w dowód najszczerszej przyjaźni. A. Słonimski, Berlin 28/III” [1929?] [To the sweet Kaper family as proof of the most sincere friendship]. Słonimski’s own signature on the cover page makes this volume incredibly rare; moreover it sheds light on Kaper’s circle of friends in Berlin, where he lived for a little over a decade from the early 1920s—before he made his way to Los Angeles—and where his career as a popular song and film composer first took off. By referring to the “sweet Kapers” in the dedication, we also get an indirect and rare glimpse of Kaper’s wife, Lola, about whom there is generally very little information. It wasn’t widely known that Antoni Słonimski (1895-1976) had befriended Kaper in Berlin; it must have been during his wide-ranging European voyages in the 1920s, when Słonimski also visited Palestine and South America.

Finally, Dr. Piotr Różański, professor at the Kraków Music Academy and excellent pianist, presented the Polish Music Center with an informative catalogue, Krakowski Salon Muzyczny: Moniuszko-Żeleński 2019 [Kraków Music Salon: Moniuszko-Żeleński 2019], published by the Polish Chamber Music Society (SPMK). This attractive publication contains several concert programs (in which Dr. Różański participated with his colleagues from the Chamber Music Society) as well as ten essays on topics ranging from Paderewski’s salon concerts in Berlin, Strasburg and Vienna to articles on Zygmunt Stojowski’s vocal music, Moniuszko’s piano compositions, and large musical forms by various late 19th century Polish composers. As such, this catalogue will be another great addition to our library.

To all our donors a hearty “Thank You!” Dziękujemy!