The Jazztopad Festival, in partnership with Polish Cultural Institute New York, continues The Great Improvisation series online live-streamed from the National Forum of Music (NFM) in Wrocław, Poland. The series presents various faces of jazz—from bold avant-garde and daring improvisation through to the mainstream. The ideal acoustics of the NFM halls provide a perfect environment for both young Polish bands as well as established artists. The series has presented such musicians as Wynton Marsalis, Bobo Stenson, Gregory Porter, Tomasz Stańko, Kuba Więcek, Brad Mehldau, and Dianne Reeves.

The Polish jazz scene has been a strongly recognizable brand in the world, both in terms of quality of festivals and the craft of artists. The Jazztopad Festival has been running for the past 17 years under the umbrella of the National Forum of Music. Jazztopad’s most distinctive feature is its commitment to commissioning new music and presenting special projects tailored for the festival. Jazztopad has built relationships with the most important jazz centers in the world, supporting the promotion of Polish improvised music and cultural exchange for many years. Since 2015 Jazztopad has also had annual editions in New York.

Sunday, April 11, 2021 at 2 PM (EST), 11 AM (PST), ), Maniucha & Ksawery will present their program based on their new album ‘Oj borom, borom.’ They are a vocal and bass duo drawing inspiration from the deep-rooted yet endangered traditional songs of the vast Polesie region in Ukraine. Their compositions combine jazz improvisation with songs of spring, harvest, weddings, lullabies and love, to create a narrative of the cycles of nature and human life. Free live streaming at Center for World Music, Polish Music Center USC Thornton School of Music, The Ukrainian Museum, Center for Traditional Music and Dance, and Detroit Institute of Arts.

‘Oj Borom, Borom’ is an attempt to create a multilayered tale based on archaic songs from western Polissya. Their starting point are traditional songs, stories, fairy tales. Vocal techniques, emotionality of this musical material, but also memory of situations, people, nature and stories accompanying the songs, are the pretext for making music together. The tales are narrated by voice and double-bass side by side as equivalent storytellers. Voice and bass become analogical participants of musical action, their parts inter-penetrate, balance, exchange. During this process it turns out that traditional music and improvised music are the languages so similar to each other, that they could be local dialects of the same language.

The Great Improvisation online series is presented by Jazztopad Festival and the National Forum of Music, in partnership with Polish Cultural Institute New York, and in collaboration with Lincoln Center, Jazz at Lincoln Center, Center for World Music, the Polish Music Center at the USC Thornton School of Music, and Center for Traditional Music and Dance.

All concerts will also live stream on the websites and social media channels of the National Forum of Music, Jazztopad Festival, and Polish Cultural Institute New York, and Europe Jazz Network. 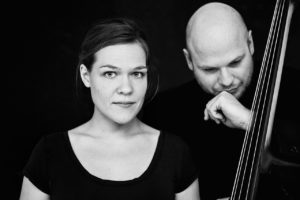 Maniucha & Ksawery is a duo that draws on the deep-rooted yet endangered traditional songs of the vast Polissya region in Ukraine. Their compositions combine jazz improvisation with songs of spring, harvest, weddings, lullabies and love to create a narrative of the cycles of nature and human life. Vocalist Maniucha Bikont is known for her long-term involvement in both traditional and experimental fields and has spent many years travelling to meet and learn from old singers in the Ukranian villages. Double bass virtuoso Ksawery Wójciński’s spectrum of musical genres reaches from early music to contemporary improvised music. Together Maniucha & Ksawery produce vibrant and adventurous tone-poems out of their minimal instrumentation, as heard on their debut album ‘Oj Borom, Borom,’ recorded thanks to the Polish National Radio Award and the support of their fans. Maniucha & Ksawery enjoy performing in cozy intimate spaces (small stages, backyards, countryside barns) as well as acoustically refined concert halls. During their concerts they not only sing and play music but also recall the stories and fables connected with their repertoire.

Maniucha Bikont, vocalist, musician, anthropologist. She conducted a number of field recordings in Poland, Ukraine and Russia. Maniucha is a member of music and theatre groups dealing with traditional music, rituals, improvisation and unconventional vocal techniques such as Dziczka, Z Lasu, Niewte, Gęba and Tęgie Chłopy (where she sings and plays the tuba). She collaborates with Janusz Prusinowski Kompania and other Polish groups performing traditional music in crudo as well as jazz and avant-garde musicians like Ksawery Wójciński, Assaf Talmudi, Shay Tsabari, Rafael Rogiński, Ilia Saytanov.

Vocal and bass duet is a rare combination. It is very courageous and brave to come up with a concert material based on such a small band. These two musicians succeeded thanks to their maturity, disciplined minimalism, and unbelievable precision. I mean not only the professional aspect but also the stylistic references, the particular aesthetics they create, deep knowledge of the sources, awareness of the contexts they refer to, of the connections they convey.