Please note: the performers originally slated for February 19 (Maniucha & Ksawery) are unable to perform due to Covid-19 quarantine—they will return to the Jazztopad lineup in May/June. Instead, the dynamic Janusz Prusinowski Kompania will be performing in the February 19 at 11:00 a.m. PST slot! See updated information below.

The Jazztopad Festival, in partnership with Polish Cultural Institute New York, continues The Great Improvisation series online live streamed from the National Forum of Music (NFM) in Wrocław, Poland. The series presents various faces of jazz—from bold avant-garde and daring improvisation through to the mainstream. The ideal acoustics of the NFM halls provide a perfect environment for both young Polish bands as well as established artists. The series has presented such musicians as Wynton Marsalis, Bobo Stenson, Gregory Porter, Tomasz Stańko, Kuba Więcek, Brad Mehldau, and Dianne Reeves.

The Polish jazz scene has been a strongly recognizable brand in the world, both in terms of quality of festivals and the craft of artists. The Jazztopad Festival has been running for the past 17 years under the umbrella of the National Forum of Music. Jazztopad’s most distinctive feature is its commitment to commissioning new music and presenting special projects tailored for the festival. Jazztopad has built relationships with the most important jazz centers in the world, supporting the promotion of Polish improvised music and cultural exchange for many years. Since 2015 Jazztopad has also had annual editions in New York.

On Saturday, February 13, 2021 at 11 AM (PST) / 2 PM (EST), the Radek Nowicki Quartet will perform. One of the most distinctive voices of Polish jazz saxophone, Radosław Nowicki has brought together an all-star band to explore improvisation deeply rooted in and inspired by tradition of such jazz giants as Wayne Shorter or John Coltrane. Free live streaming at the Facebook pages of Jazz at Lincoln Center and the USC Polish Music Center.

On Friday, February 19, 2021 at 11 AM (PST) / 2 PM (EST), Janusz Prusinowski Kompania is a group of musicians who follow in traditions of village masters they have learned from—but they are also an avant-garde band with their own characteristic sound and language of improvisation. They combine music with dance, and the archaic with the modern. Free live streaming at the Center for World Music, Center for Traditional Music and Dance, and the USC Polish Music Center.

The Great Improvisation online series is presented by Jazztopad Festival and the National Forum of Music, in partnership with Polish Cultural Institute New York, and in collaboration with Lincoln Center, Jazz at Lincoln Center, Center for World Music, the Polish Music Center at the USC Thornton School of Music, and Center for Traditional Music and Dance.
All concerts will also live stream on the websites and social media channels of the National Forum of Music, Jazztopad Festival, and Polish Cultural Institute New York.

The Radek Nowicki Quartet, founded in 2005, has performed mainly in Warsaw’s jazz club Tygmont. In 2007, Jazz Forum released an album of the quartet entitled “Live,” which resulted in an invitation to the Chopin and his Europe festival for a performance with Makoto Ozone, Jazz Jamboree 2007, and the 10th Summer Jazz Academy 2017 with Kasia Pietrzko. RNQ’s music is often based on the idea of simultaneous, collective improvisation. Compositions by Nowicki lead to open structures and are a pretext for mutual interaction of musicians creating music open to new ideas and expressions. All members of the quartet are graduates of jazz faculties and departments at the Karol Szymanowski Academy of Music in Katowice. Two of them (Nowicki and Jaros) also graduated from the Jazz Department of the F. Chopin 1st and 2nd degree State Music School in Warsaw. 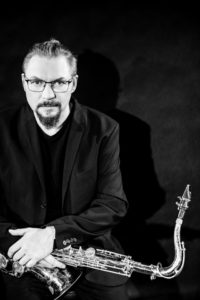 Radosław Nowicki is a tenor and soprano saxophonist, distinguished by his own characteristic tone. He is a prize-winner at solo competitions: Monte Carlo Jazz Soloist Competition, and the 3rd International Jazz Competition in Szczecin. As an accompanist  and co-founder of various bands, Nowicki received the Jazz Juniors 1999 (III) award, the Siedlce Jazz Standards Festival (Grand Prix), and in 2004 the Kultursalon Hörbiger award in Vienna. Nowicki has collaborated with such great musicians as inter alia, Michał Tokaj, Artur Dutkiewicz, Aga Zaryan, Michał Miśkiewicz, Marita Alban Juarez, Jerzy Małek, Krzysztof Pacan, Paweł Kaczmarczyk, Monika Borzym, Grzegorz Karnas and recently with Marcin Wasilewski Trio. The saxophonist has also performed with Tomasz Stańko in the concert project “PEYOTL”, realised together with Andrzej Smolik, and was also a member of Zbigniew Namysłowski’s Big Band. Apart from the quartet, the saxophonist’s most important endeavors include Nowicki / Święs / Frankiewicz trio. In 2013 Nowicki was nominated for a Fryderyk Award of the Phonographic Academy in the Jazz Album of the Year category (for Pathfinder released by Multikulti Records).

Double bass player Michał Jaros was recognized in 1996 at Jazz nad Odrą festival in Wrocław as the New Face of Polish Jazz, receiving the Grand Prix award. In the same year, together with The Newest Quartet, he received the 3rd prize and a distinction, and in 2002 the 1st prize in the Jazz Juniors competition in Kraków. In 2003, he won the Grand Prix in the Hot Jazz Spring traditional jazz competition in Częstochowa, receiving the Swinging Raven statuette. In 2009, he was a prize-winner of the Polish Radio Folk Festival. He is a winner of the Artistic Scholarship of the Minister of Arts and Culture for outstanding achievements. Jaros is known for his collaborations with Ishmael Wadada Leo Smith, Ronnie Cuber, Judy Bady, David Linx, Patricia Barber, Dorużka, Jerome Sabbagh, Janusz Muniak, Zbigniew Namysłowski, Piotr Wojtasik, Maciej Sikała, Piotr Baron, Grażyna Auguścik, Aga Zaryan, Grzegorz Karnas, Bernard Maseli, Michał Tokaj, and Marek Dyjak.

Michał Miśkiewicz, drummer with an expressive, recognizable style. As a sixteen-year-old he made his debut in the band of Jan “Ptaszyn” Wróblewski. A year later, Tomasz Stańko invited him to collaborate. As a member of Stańko’s quartet, and later Marcin Wasilewski’s trio, he participated in recordings for the prestigious German label ECM, and for many years performed on major European and US stages. With Marcin Wasilewski Trio, Michał Miśkiewicz won many awards, including the award of Polish Radio 3 “Mateusz 2011”, and awards of the Phonographic Academy “Fryderyk” for the albums Trio (2005), January (2008), Faithful (2011), and Spark of Life (2014). Michał has collaborated with all the leading names in Polish jazz, as well as with the greatest names of world jazz, including: Buster Williams, Billy Harper, Dino Saluzzi, Arthur Blyth, Joe Lovano, John Surman, Mike Turner, Gregoir Maret, Anders Jormin, Palle Daniellson, Bobo Stenson, and Charles Lloyd. 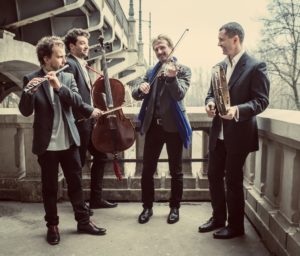 Janusz Prusinowski Kompania is a group of musicians who follow in traditions of village masters they have learned from: Jan Lewandowski, Kazimierz Meto, Józef Zaraś, Piotr and Jan Gaca, Tadeusz Kubiak and many others—but they are also an avant-garde band with their own characteristic sound and language of improvisation. They combine music with dance and the archaic with the modern. Their tours and concerts incorporate educational activity, both in Poland and abroad. The ensemble is comprised of Janusz Prusinowski—fiddler, dulcimer and hurdy-gurdy player, singer and composer; Michał Żak—flautist, clarinetist and shawm-player; Piotr Piszczatowski—multi-instrumentalist, actor, dancer and cultural organizer; and Szczepan Pospieszalski—trumpeter and composer.

Kompania’s unique style is the result of their attempt to find new ways of interpreting the most important elements of village music from central Poland. It brings together mazurkas—sung, played, danced to, improvised live—and modern man. What new quality can be given to archaic and seemingly simple melodies and rhythms without resorting to trendy sample mixing? Where is the source of multi-layered rhythm, which is never even yet always perfectly precise? Where do these extraordinary melodies, challenging the equal temperament, come from? It turns out that traditional music of Polish villages can be a reference point for a variety of genres: reminiscent of Chopin in its melodic pattern and the use of rubato, sharing a love of improvisation with blues and jazz, evocative of contemporary music in its tone, and possessing the expressiveness of rock music. It is able to connect the East and the West, the North and the South, engaging in a dialogue with musical traditions of near and remote countries.

Dance makes music visible, tangible and meaningful—thus, dancers are a natural addition to mazurkas. Apart from concerts, Kompania’s music can be heard at the parties of village and urban Dance Clubs. The band also runs various music and dance workshops. It can be proudly admitted that many novices started their adventure with Polish music, learning to play the fiddle, the drum, or to dance thanks to Janusz Prusinowski Kompania.

Between 2008 and 2012 the band performed in most of European countries, Asia, Canada, the USA (including Carnegie Hall and Chicago Symphony Center) – and of course Poland. Besides playing concerts with traditional Polish music the band prepared a special program of performances “The village roots of Frédéric Chopin’s music” with pianist Janusz Olejniczak. In 2012 Kompania began a unique project “Kujawy” with three masters of Polish music: Tadeusz Kubiak, Tomasz Stańko, Janusz Olejniczak, and a group of singers led by Ewa Grochowska. The group also performed with Michał Urbaniak, Artur Dutkiewicz and Alim Qasimov. In October 2012 Janusz Prusinowski Kompania performed at the prestigious world music fair – WOMEX 2012 in Thessaloniki. In 2013 they spent a full month in the US with close to 30 concerts, performing at The Kennedy Center in Washington and at the European Jazz Festival in Los Angeles and the Richmond Folk Music Festival. Having seduced American audiences with mazurkas, they reached for Germany, France, Benelux, Great Britain, Croatia and a couple of other countries, everywhere leaving the dedicated lovers of wild Polish melodies behind. They’ve also returned to Womex (Cardiff 2013) with the „Wild Music of the Heart of Poland” project, created to present Polish traditional music, performed by young groups, to the international audience.

In 2014 Kompania, together with the eminent Polish singers (Ewa Grochowska, Justyna Piernik, Maniucha Bikont, Kaja Prusinowska, Adam Strug) and the group of the Turkish vocalist Muazez Ozacar, prepared a special concert to celebrate the Turkish Year – “Exploring the Connections”. Its premiere in Izmir was recorded and released on DVD. Musicians and dancers of Janusz Prusinowski Kompania were also involved in various events related to Oskar Kolberg’s Year, whose archives of the Polish village music remain their constant inspiration. The group has initiated and coordinates the Kolberg Academy, educational projects for children and the “Schools of Tradition” teaching about village music and dance.

In 2008 the band released “Mazurkas”, an album which received rave reviews. This was followed in 2010 by their second album “Heart”, awarded the Folk Record of the Year by the Polish Radio. In 2013 Kompania recorded the album entitled “Knee-deep in Heaven”, co-released by the prestigious German label Oriente. In December 2018 the band presented their  newest album „In the Footsteps”, in cooperation with well-known label Buda Musique. In 2019 we had a great tour in Japan, plus in South Korea.

Janusz Prusinowski—leader of the band—in 2014 was awarded with Bronze Medal for Merit to Culture Gloria Artis. In 2015 he received the annual prize of the Minister of Culture and National Heritage and was nominated by the Regional Council of Mazovia for the C.K Norwid prize in the Music category.

Visit www.januszprusinowskikompania.pl for more details and full bios of all performers. For an introduction to their music, visit www.soundcloud.com/janusz-prusinowski-kompania or www.youtube.com.