Nowy Dziennik, the New York City based Polish weekly, featured an extensive interview in Polish with violinist Kinga Augustyn. Published on 14 February 2021, the article entitled Muzyczny świat Kingi Augustyn [The Music World of Kinga Augustyn] begins with a discussion of the two most recent recordings by this Polish virtuosa, who is also a long-time resident of New York City and former Gala performer at the Paderewski Festival in Paso Robles (pictured above).

Augustyn’s latest recordings include La Pasión, which features Astor Piazzolla’s Tango-Etudes for Violin Solo, and Turning in Time—an assortment of solo violin works by Elliott Carter, Luciano Berio, Krzysztof Penderecki, Grażyna Bacewicz, Isang Yun and Debra Kaye. Released earlier this month, both CDs were issued by the Centaur label, with whom Augustyn has collaborated successfully for a number of years.

Amongst Augustyn’s discography, which already includes eleven titles, these last two CDs are truly extraordinary for being devoted exclusively to solo violin music. “The solo violin repertoire isn’t only difficult to perform, it’s also quite atypical,” said Augustyn in her interview. “The performer has only four strings and a bow, and must play them just so in order to win over the audience with the interpretation of a given piece.” But—according to Augustyn—there are also advantages to this kind of repertoire. “For me, as a performer—this is also an interesting challenge because I know that I can rely only upon myself; I don’t need to conform to anyone else and I don’t need to force anyone to do anything.”

Writing about Augustyn’s Turning in Time CD for the New York Concert Review, Rorianne Schrade noted that, “Ms. Augustyn has the natural musicality, keen intellect, and highly developed technique to turn the thorniest of compositions into child’s play, and so it is hard to imagine a better advocate then she is for a program of such challenging violin works of the 20th and 21st centuries.” 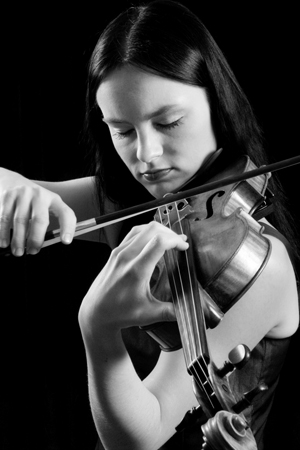 For those interested in Polish music, Augustyn’s newest CD also includes a world premiere of Krzysztof Penderecki’s Capriccio. “Yes, it is a very important piece for me,” Augustyn said in her interview. “I met Professor Penderecki in 2013 at his birthday celebration in New York. That’s when I played this composition for him, since I was working on it at that time. I also had a few questions for him about this composition, and generally Prof. Penderecki was pleased with my interpretation and even wrote ‘Bravo’ in my copy of the score as well as autographed it.”

Augustyn also discusses the history of meeting Debra Kaye and how collaborating with the composer on Turning in Time led to it being recorded on this CD. Other topics in Augustyn’s Nowy Dziennik interview touch upon contemporary music and its reception by audiences, teaching violin to children and adults, as well as some tantalizing hints on yet another Augustyn recording project that will include more works by Grażyna Bacewicz.

All fluent Polish readers are invited to find out more Kinga Augustyn and her views on music by reading the interview here: dziennik.com/featured/muzyczny-swiat-kingi-augustyn.