Held annually in its second iteration since 2006, the Paderewski Festival in Paso Robles once again presented a fascinating mix of programs and performers in several idyllic settings all around this charming Central Coast town from October 31 – November 3, 2019. Per tradition, the first Festival concert on Thursday night was held at Cass Wines, and it was a very special evening for at least two reasons. First, it was our first time to hold an event in Cass Winery’s new and spectacular Barrel Room, opened just a few months ago. With a large interior that opens via several glass doors into the wide porches outside, it is a very attractive spot that also happens to be an excellent concert venue. The setting sun cast long shadows over gently sloped hillsides covered with rows upon rows of vines provided a truly romantic backdrop to the music. 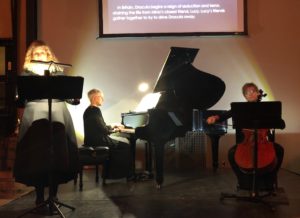 And here we come to the second reason why this Festival opener was so special. It was Halloween, and the program provided by the Ensemble For These Times featured music inspired by the occasion. Titled “Dracula Rising: Ghosts of Hollywood Past,” the repertoire heard by a larger than usual audience included film music by Henry Vars, Bronisław Kaper and Wojciech Kilar as well as thematically-appropriate works by Erich Korngold, Aleksander Tansman and Mario Castelnuovo-Tedesco. A significant portion of the audience wore Halloween costumes and a longtime Festival sponsor, decked out head-to-toe as a monster bride, won first prize for her costume as well as her full commitment to character.

Two Festival events were scheduled for Friday—a noontime master class with the Gala pianist and an evening concert at the Park Ballroom. Takeshi Nagayasu, a young pianist born in Japan and currently studying in New York, traveled to Cal Poly SLO Music Department to work with the piano students refining their interpretations of solo works by Bach, Mendelssohn, Liszt and Tansman. A large crowd of students and some of the Festival patrons filled the small recital hall in the Davison Music Building on the Cal Poly campus. 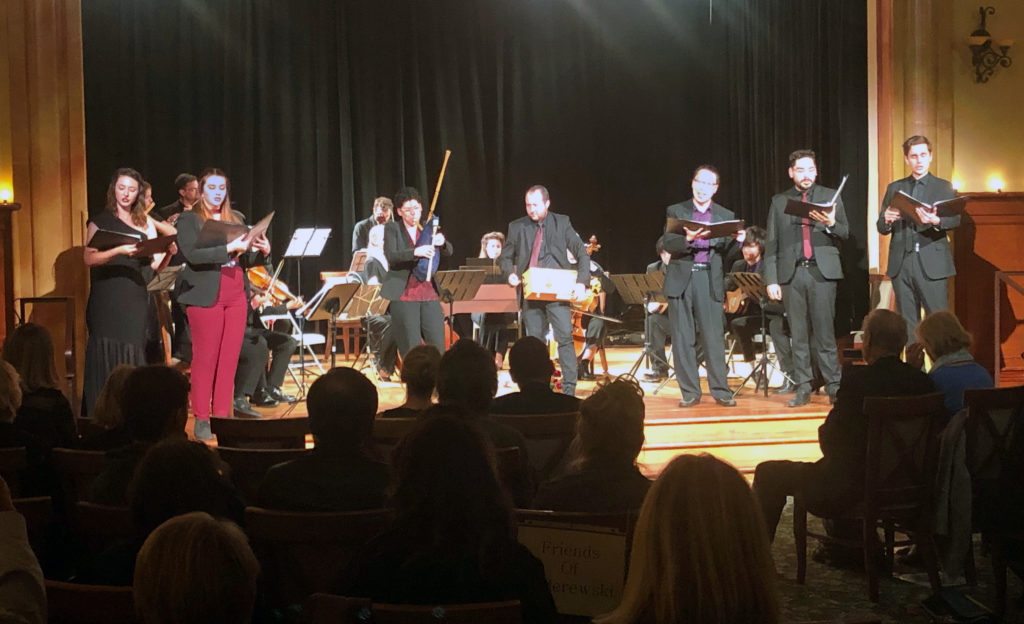 The evening concert of “Polish Baroque Treasures” given by USC Baroque Sinfonia under the leadership of Prof. Rotem Gilbert was a very special treat indeed. Following a pre-concert wine tasting hosted by Derby Wine Estates, the ensemble of over a dozen players with period instruments and five singers specializing in early music, who had traveled from the USC Thornton School of Music in Los Angeles for this occasion, took to the stage. They presented a varied program, covering music written between the late 1400s and early 1700s by such composers as Ładysław z Gielniowa, Jakub Reys, Mikołaj Zieleński, Marcin Mielczewski, Adam Jarzębski, Grzegorz Gerwazy Górczycki and Stanisław Sylwester Szarzyński. A large crowd gave a lengthy standing ovation and elicited an encore from the ensemble. Afterwards, many of the audience members charged the stage to chat with the performers and ask about the early music instruments used for the concert. 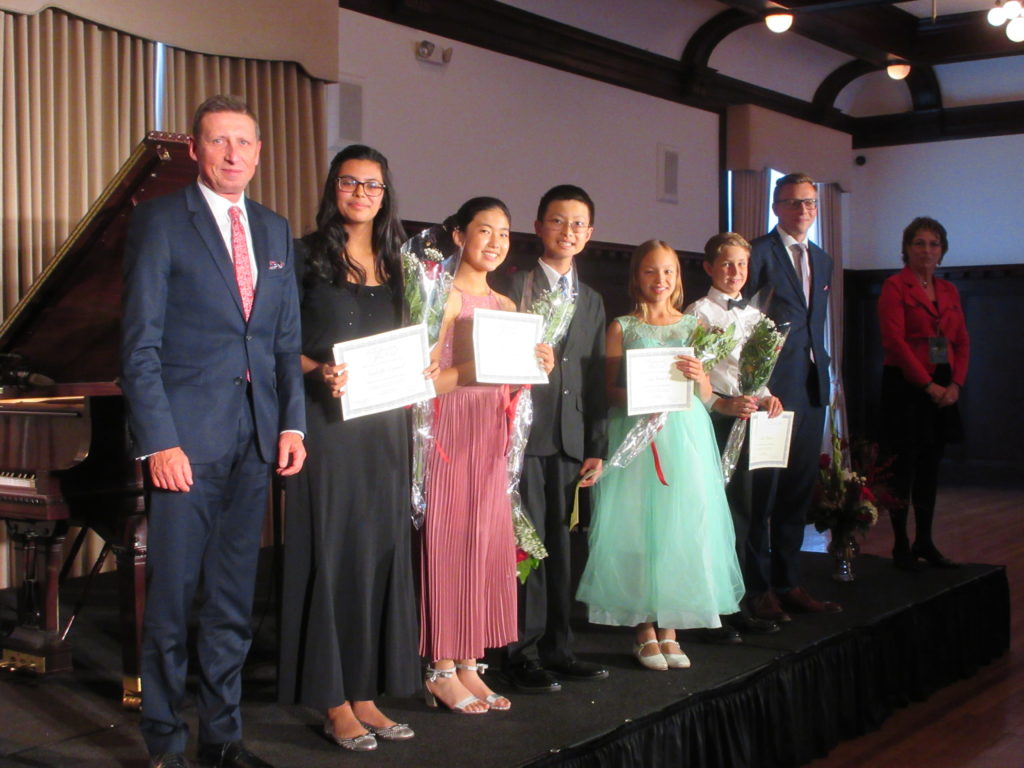 Another Festival tradition is to present the winners of the annual Festival Youth Piano Competition. Free and open to the public, this concert was held on Saturday afternoon, November 2, at the historic Grand Ballroom of the Paso Robles Inn—the hotel where Paderewski stayed during his visits in town. Five very talented young performers—Colin Foster, Noelle Hadsall, Andy Shen, Suri Kim, and Isabella Osgood—presented a repertoire of solo piano pieces by Bach, Chopin, Glinka, Haydn, MacDowell and Ravel. Their poise and pianistic accomplishments thrilled the audience of happy parents, teachers and peers, and impressed Dr. Jim Brescia—SLO County Superintendent of Schools—who was present to emcee the concert.

A few hours later, the lobby of the Ballroom of the Paso Robles Inn again buzzed with excitement as the pre-Gala reception got under way. Filled with delicious wines from Epoch Estate, the audience soon filed into the Ballroom for the main event: the Gala Recital featuring Takeshi Nagayasu—First Prize Winner at the 2019 Kosciuszko Foundation Chopin Competition. His truly memorable performance opened with a finely shaded rendition of Paderewski’s Légende that was coupled with Chopin’s Op. 34 Valse and Ballade No. 3. Having demonstrated a fine grasp of idiomatically challenging repertoire, Mr. Nagayasu followed with one of the best and most intense performances of Scriabin’s Sonata No. 5. After the intermission, he returned to a dreamy rendition of Chopin’s Nocturne Op. 62 and finely-structured interpretation of Chopin’s monumental Sonata No. 3. A prolonged standing ovation by the large crowd elicited an exquisitely delicate and sensuous encore of Debussy’s La soirée dans Grenade. More rapturous applause resonated well into the night. Mr. Nagayasu’s pianistic prowess, his thoughtful choice of repertoire, his infallibly gossamer touch, and his sterling finger technique served to execute his deeply considered interpretations. He is certainly a young pianist at the cusp of a significant performing career and the Festival will look forward to hearing him again in the future.

The closing event on Sunday morning, November 3, featured the Festival’s Artistic Director, Marek Zebrowski, in a lecture on “Paderewski and Politics.” A presentation richly illustrated with documents from the Polish Music Center’s Paderewski Collection provided a look into the origins of Paderewski’s very successful political career that led to the regaining of Poland’s independence after World War I. Held outdoors on Epoch Estate’s York Mountain property, it was a fitting coda to this year’s Festival. Epoch is the current owner of the former York Mountain Winery, where Paderewski’s wines were bottled in the 1930s. A fine wine tasting and light buffet fortified the Paderewski Patrons and Friends of Paderewski who attended this exclusive event. 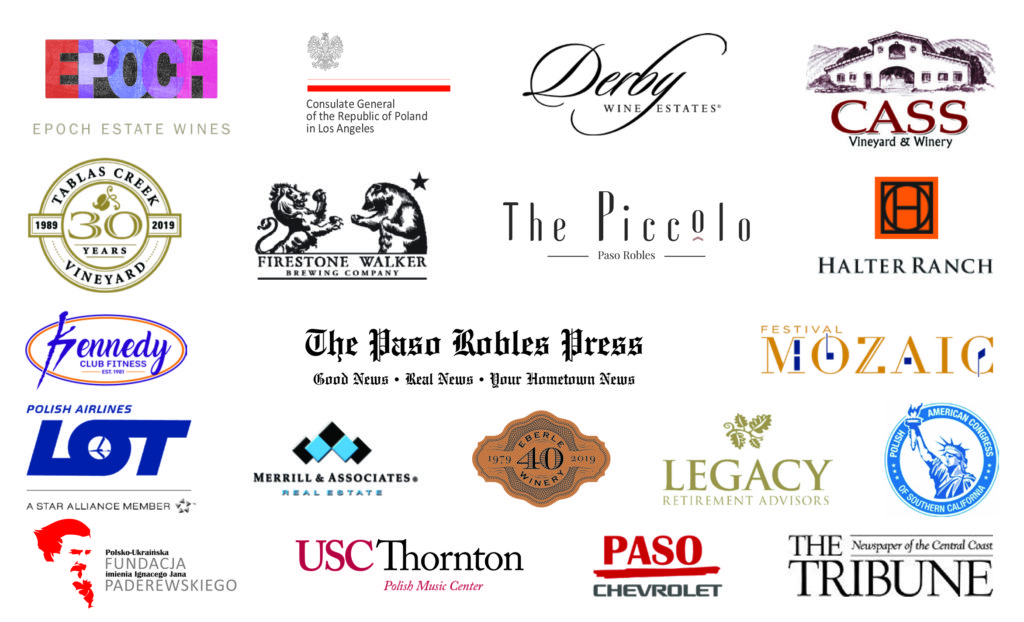 Next year’s Paderewski Festival in Paso Robles will be held from November 5-8, 2020. We hope to see you there!