“Over a decade of my Ambisonic recordings sessions will culminate in two very different premieres in Seattle – on Feb.22 at Cornish College of the Arts featuring the Kin of the Moon ensemble, and on Feb.28, at the Meany Center for the Performing Arts as part of DXARTS / Music of Today concert series.

We’ve recorded underground with Josiah Boothby (French horn) and Anna Niedzwiedz (soprano) in the otherworldly Fort Worden Cistern (45 sec. reverb!) and WW| era bunkers, at St. Mark’s Cathedral in Seattle with Mirta Wymerszberg (bandoneon, flute) and Joseph Anderson (concertina), climbed stairs and ladders with Josiah Boothby and Leanna Keith (flutes) at Satsop Nuclear Plant, made all kinds of noises with Heather Bentley (viola), Leanna Keith and Kaley Lane Eaton (soprano) in a secret hallway at the University of Washington campus. These recordings are now incorporated into the electronic layers of both pieces, with rehearsals under way. I played the violin in some of the recordings but will be taking the driver’s seat at the mixer for the concerts.”

A New Phase: Faculty Concert Featuring Kin of the Moon

The Kin of the Moon ensemble featuring Cornish College of the Arts faculty members Kaley Lane Eaton, electronics and voice; Heather Bentley, viola; and Leanna Keith, flute will utilize acoustic and electronic sounds to craft improvised sound worlds. They will be performing the world premiere of Ewa Trębacz’s Winter After Times of Fire. The work is a surround-sound collage of improvisations from the Fort Worden Cistern and Bunkers, Satsop Nuclear Power Plant, Thomson Hall at the UW and the Missionaries Church in Krakow, Poland. It was commissioned by Kin of the Moon through a grant from King County’s 4Culture. In live performance, it features improvised responses to the audio collage.

This program explores three ways of improvising by responding to pre-recorded sound, to a graphic score and forgotten sounds, and to the moving imagery of an original film. Violist/composer Heather Bentley’s new graphic score Amage #2 will begin the program, followed by Daniel Husser’s stunning new film Synthetic Evolution depicting urban and natural landscapes in juxtaposition.

Music of Today. DXARTS: Until Spring 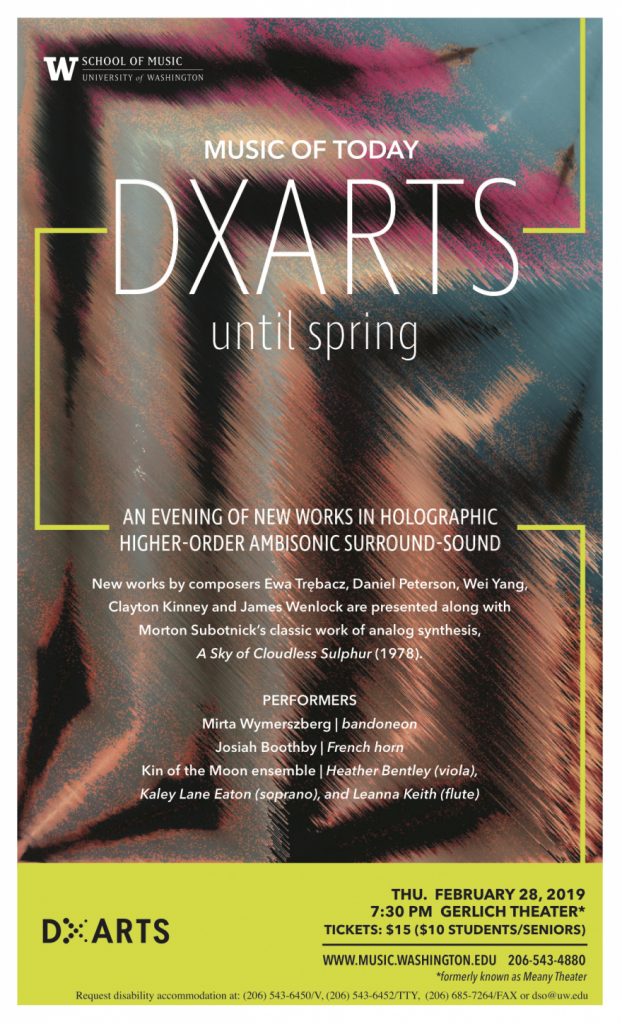 The DXARTS – Center for Digital Art and Experimental Media and the University of Washington School of Music are pleased to produce this event in Holographic Higher Order Ambisonic surround-sound.